Then again, it’s football with no winner. It’s football that means nothing. It’s a tease. It’s something you want to be excited about, but you just can’t. Because nothing happens.

I don’t know if it’s just me, or if it’s all men in general, but when something real isn’t happening for a while, I don’t want to be teased.

Take Christmas for example. Greatest day of the year, right? Well why would I want to torture myself for the rest of the year, or even through the month of December, waiting on it every day. That’s a waste of time. It’s not coming any sooner just because I’m thinking about it or getting excited. That’s how I feel about A-Day. I’ll go and watch, but in the end it means nothing, and it’s just something to make me wish it was August already. And I don’t want that. Shame on you, A-Day.

Ok, besides all that, and besides the fact that it’s pointless to get excited about a practice game where you can look at every positive on one side of the ball as a negative on the other side of the ball… I mean, am I right? If the offense looks awesome, it pretty much means the defense looks bad, right? Am I missing something? Yayyyy, we just ran for 900 yards. Ohhhh, it’s because our guys couldn’t tackle him. Yippee.

Ok seriously, besides all that, Auburn A-Days are just flat out boring.

I’ll tell you exactly how it’s going to go. Frazier and Moseley will hand the ball off about 10 times in a row. Then about every 25th play, they’ll throw a bomb to a receiver you probably don’t know much about. That’s it, that’s what it always is.

I know Chizik isn’t the guy you’d expect to be the life of a party, even though his clothing choices may say otherwise, but if he was the guy in charge of getting people with sleeping problems to sleep through the night, he could have the whole clinic knocked out in a matter of minutes by showing them clips of past A-Days. 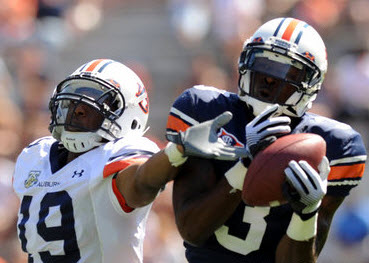 Look, I understand that the purpose of the “game” is to show the fans a little bit of what to expect next year, while keeping guys healthy. But do you remember how Cam looked in his one and only A-Day? If we based our expectations off of what he was allowed to do that day, I think we’d all agree that I might have been just as good of an option at quarterback that year.

And let’s look at last year. We knew it was a battle between Barrett Trotter and Clint Moseley, but who took the majority of the snaps? The walk-on, scout team quarterback. No offense to him, but I can’t even think of his name right now.

You think if Kiehl Frazier has a good day this Saturday that it means the job is his? You think the coaches will just disregard Fall practice and say “well Kiehl did have a great A-Day”? No. The game does not matter in the least. It’s the least productive and least meaningful practice of the entire Spring, and has just become nothing more than a formality. Hey we’ve always done A-Day, let’s go out there and run around for a few hours and give ’em a little show.

Now I’m starting to sound angry. I’m really not. I’m just not excited. But I feel like I should go. And I will go. I just won’t expect much.

Wait, let me backtrack a little bit. I will say that I am excited to see Corey Grant run the ball, and I really can’t wait to see the ‘Stache and his flowing mane. Oh, and there’s the Heisman statue unveiling, which really isn’t part of A-Day at all, but I am pumped for that probably more than all.

I also want to say that I don’t blame Chizik for his style of A-Day formatting. He’s just doing it because he has to and his #1 goal is to keep his guys healthy. He’s seen all he needs to see so far this Spring practice, so he’s not going to tell his guys to go all out, blow out a knee, and not be able to play next fall. But if he’s going to do that…

As I tweeted earlier this week, Auburn’s A-Day should take the same format as Auburn Basketball’s Hoops Madness. For those not in the know, it’s basically the first day of practice, and what some teams call Midnight Madness. Auburn’s version includes a dunk contest, fan participation, and then a scrimmage at the end. This is exactly what Auburn football should do.

Who wouldn’t love to race Onterrio McCalebb? Who wouldn’t love to see some sort of skills challenge or passing contest between the quarterbacks. Longest field goal challenge. Bring back former players and let them go up against some of the current players in a short 7-on-7. I can keep going if you want me to. Auburn, call me.

If you’re charging $5 dollars for admission to the game and it ends up being as simple as it can get while still barely being able to call it a game, give us something a little extra.

Sorry if I’m coming off as a little whiny, but it’s all A-Day’s fault. I just know that in my heart I’m going to get a little pumped on Saturday, and then when I leave I’ve got 140 or so more days until meaningful football. That’s my problem. It’s not you, A-Day. It’s me.

It’s good for the youngest players to get a little ‘pre-experience’ of playing in Jordan-Hare in front of a reasonable crowd before it counts.

Sadly, I have to agree with you. A-Day is yawn. Don’t get me wrong, it is a thrill to be at Auburn in the springtime, but the game itself? Not much. I’d enjoy watching a full-out practice more, frankly. I agree, there are a lot of ways to make the whole experience more fun and exciting–A-Day Gridiron Madness. But whatever, I have no expectations. It’s enough to get to walk out of into Jordan-Hare, feel the breeze, hear the music and be at one with all things Auburn. War Eagle!

I think the skills challenge and former players activites are a great idea….you should pass that on. I quit going to A-day years ago for the reasons you describe, but would definitely go if there was actually something interesting that was going to happen.