With 83% of the vote, Cam Newton took down Antonio Gates in Round 2 of the Madden Cover Bracket and has moved on to the Elite 8. Cam’s next opponent is Arizona Cardinals wide receiver Larry Fitzgerald. You may remember him from the Madden 2010 cover. So why exactly is he up for another cover this quickly? 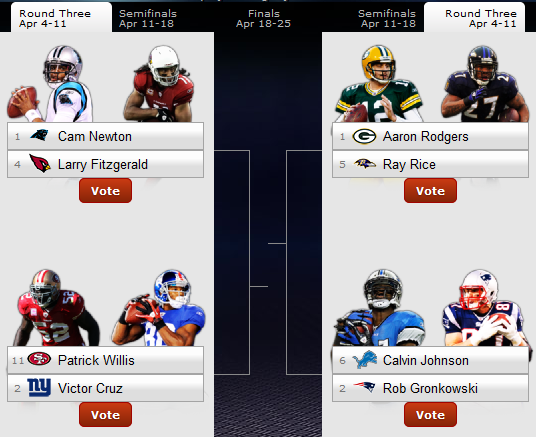 Regardless, this is Cam’s first opponent that could give him some trouble since Fitzgerald is one of the biggest names in the NFL, so you need to vote, and vote often. Voting for Round 3 lasts until next Wednesday (4/11).

And please stop telling me that we don’t want Cam to win because of the Madden Curse. If it were real, which it’s not, he is the only guy who could beat it.

I haven’t checked, but hopefully no Georgia Tech alumni in the mix. Those nerds would be the only way for Cam to get beat in the votes….

Yes, actually there is. Calvin Johnson is from Georgia Tech. But shhhhhhhh, maybe they haven’t figured it out yet.

I think we’re OK here though. Surely Cam has surpassed Aubie as the face of Auburn…

Is it possible to vote more than once?

Woah! I’m really digging the template/theme of this blog.
It’s simple, yet effective. A lot of times it’s
hard to get that “perfect balance” between superb usability and visual appeal.
I must say you have done a awesome job with this. Also, the
blog loads extremely fast for me on Opera. Superb Blog!