Remember when we thought that Under Armour was going to change Auburn’s pants’ stripes before the National Championship game in 2010? As we know now, they didn’t, but they did make some changes last year that didn’t sit well with some Auburn fans.

Most fans did, however, like the idea of the pre-BCS stripe changes because they matched the stripes of the helmets and jersey sleeves. As of right now, and as far back as I’ve seen, they do not. Uniform changes usually spark up intense debate, with the traditional, “don’t change anything” side usually being the majority. However, most fans would admit that changing the pant stripes to match the rest of the uniform would be acceptable.

This past January, I bought myself a 2012 vintage Auburn Football calendar from Asgard Press. Each month displays a game program cover from many decades ago. Late last week, still in February, I got antsy wanting to see what the month of March had for me, so I looked ahead. (Yes, for some reason I slightly view this as cheating.) Here is what I saw for the 1966 matchup that took place in Cliff Hare Stadium between your Auburn Tigers and the UT-Chattanooga Moccasins (a 20-6 Auburn win, and it was Band Day, no less): 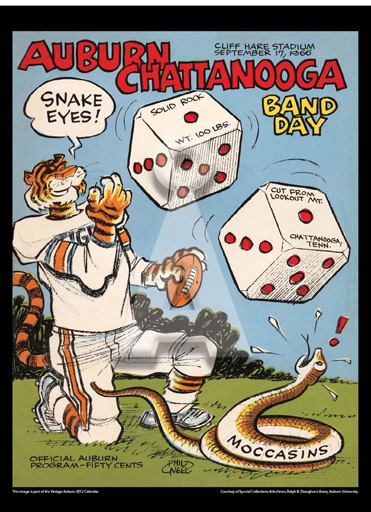 After you get over the fact the fact that Aubie is playing craps with a snake from Chattanooga, and the fact that the program cost 50 cents ($5.00 today) take a look at the pant stripes. There they are, seemingly the only universally accepted uniform modification – stripes that match the sleeves and helmets.

I immediately pulled up the 1967 Glomerata from Auburn’s Digital Library to check and see if Auburn had in fact worn pants with these stripes in the 1966 season. They did not, as you’ll see below, but this does appear to be the first appearance of the stripes that we know today, as well as the first year the AU was on the helmet. 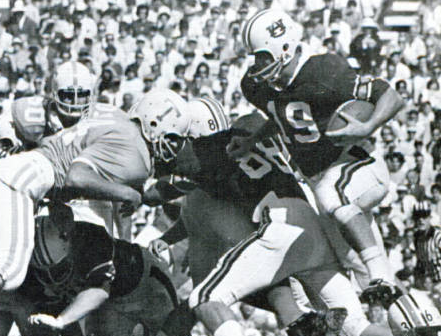 Maybe Phil Neel (the cover illustrator, and creator of the Aubie cartoon) was trying to make it happen. Maybe he was a man before his time. But now that I think about it, it is strange that he would draw the stripes with the white space in between given that this program was for the first game of the first year of the stripes. The season before they only wore a single blue stripe down the pants. It just seems out of place for him to draw those. I’m beginning to think he was a soothsayer.

Anyway, during this football offseason, I’m going to try to do a weekly post on Auburn football uniform history. It may be something I’ve never noticed from the past, or some interesting story about why the design was done a certain way. If you have any ideas or info, please send them in.

Highlights of Auburn’s 20-13 Loss to Georgia

I tore the calendar apart and framed the pages. They look good in the kid’s playroom.