Let me start off by answering that question. I sure hope not, at least not on Monday night. What you are seeing in the picture below is an Under Armour vendor bus/store stationed somewhere in Glendale. As you can see, or as I’m about to tell you to see, the stripes down the pants on the models of Cam and Travante Stallworth are not the standard stripes normally worn by our Auburn Tigers. The current and has-been-for-as-long-as-I-have-known-Auburn-football version has no white space between the orange stripe and the blue trim. 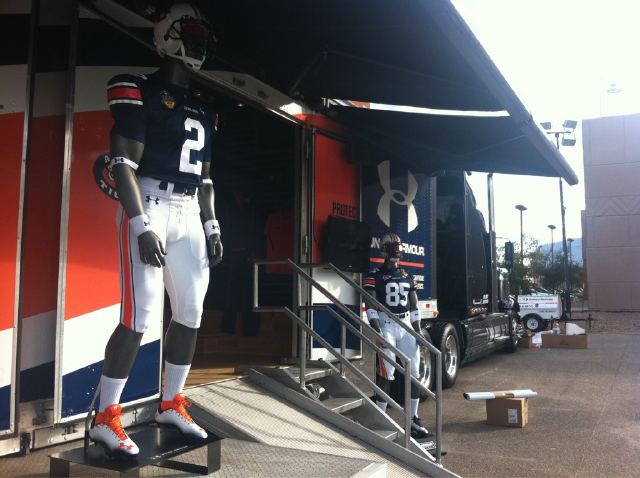 Rumblings of a stripe change began Wednesday when the latest Under Armour commercial was released and then played what seemed like a million times during the Under Armour High School All-Star Game (or whatever it’s called). As you saw on the ‘Blogle, a Cam-like figure is shown sitting in a locker room, lacing up his snazzy, only-worn-by-Cam, space-age cleats. Those with a keen eye noticed that he was wearing pants that didn’t match Auburn’s current uniform. Some blew it off, but those that love rumors said that Under Armour was pushing the new look. The rumor grew legs when the picture above was tweeted this afternoon by ‘Blogle follower @jordandeen.

Uni Watch, a site devoted to uniform aesthetics had this to say about the stripe change:

I have confirmed that Auburn will definitely have new pants striping next season (plus they’ll also have “War Eagle” printed on the back of the pants — ugh). I don’t know if the new striping will match what we saw in that Under Armour commercial, but that seems like a pretty safe bet. I also don’t know if the new striping will appear in Monday’s game against Oregon, but it wouldn’t surprise me.

First off, I’m not even going to address the ridiculous idea of “War Eagle” printed on the back of the pants. That’s just stupid, and it better not happen. As far as the stripe change, I think it’s subtle enough to where no one would really notice, but it would make the uniform more…uh, uniform. I mean it’s nothing like this, but like I said before, I don’t want it change for the game this Monday. It’s small and we’re just talking white space here, but let’s not tempt fate. The non-matching stripes have won 13 games this year. Let’s not give the new stripes their first start in the most important game in school history.

If it has to be done, do it next year please. What do you think?

The brontosaurus mannequin with the weird pants make the uniform look like a cheap knock-off if you ask me. Sure, it’s a subtle change to make as opposed to orange jerseys or blue helmets or sublimated tiger stripes, but a change that just now gets made after 52 years? Nah, no-go for me.

I hate that Under Armour felt the need to rush this matter as an attempt to show up Nikegon and I hate that companies like Nike and UA feel that the only way people are going to get remotely excited about a game is unveil a brand new/partially new/comic book costume-like uniform. It’s an sham, and I think it’s unfortunate because it’s safe to assume that Maryland (UA base of operations) is no longer the brainchild/guinea pigs of ‘innovation’. It’s Auburn, and I have a feeling this might just be the first of many ‘subtle changes’.

Secondly, UA missed a golden opportunity to set itself apart from Nike. While Oregon goes out an debuts it’s tennis ball colored socks, duck billed face masks and numbers that have neon yellow LED lights in them (because that IS the only way Oregon fans can get excited about a game), UA could have remained steadfast and say, to steal a quote, we’re gonna’ do what we do. Instead, we now have War Eagle across the ass. Next comes the aforementioned tiger stripes on the pants, eagle feathers on the helmet, etc., etc.

And besides, think back to A-day last year: The Auburn Family is a fan base of Alums and donors that completely WIGGED OUT when the AU decal on the helmet was made 1/3 of an inch larger…

Sports Mania is set up in Scottsdale ,AZ we have the tents with all the flags and are stocked up on all your Tigers gear for the game look for us near camel back and drink water just past old town on Scottsdale dr .

somebody should have told under armor that the game is all orange
they have the stores packed here with navy
lame
ducks are all yellow
same complaints from their fans
although the green capris with yellow duck feet on them are a new….errrr…… different? kinda fashion statement?????

[…] As a few of my tweeps have noticed, the pant stripes have not been changed as Under Armour may have suggested they would […]

[…] with all of that, but I still want the pants stripe to go all the way down (I really want them to look like this). I want the names and numbers back to 2010 size, and I want the sleeve stripes to be more than a […]