You may or may not know that I grew up in Opelika, AL, the twin city of Auburn. Opelika High School’s colors are red and black, and the mascot is a bulldog. Their biggest rival is Auburn High School, who uses blue and are the Tigers.

Way back when Opelika was picking colors and their mascot, Georgia was Auburn’s biggest rival, so they chose to go the Georgia route. Of course, back then there weren’t many arrests and dancing on the home team’s midfield logo, but in terms of look and feel, Opelika High School was like the University of Georgia because Auburn High School was like Auburn University.

I say all of that to say that when I grew up and even probably through my first few years at Auburn, I never minded Georgia because I pulled for my hometown team that looked just like them. I know that sounds dumb, but I was a kid, get off me. Of course I wanted to beat Georgia, and I never took delight in them winning, I just didn’t hate them. I think you know where I’m going…

Like everybody has always said, Georgia had always been a friendly rival to Auburn. They are one of the biggest games of the year, but doesn’t even come close to the Alabama game, so it always seemed to be second tier, taking a little bit of the hatred out of it. Georgia being in the East, probably has something to do with that as well. Without having to worry about what they do all year long, it’s really just a fun, rivalry game. That was until Mark Richt, the nicest guy in the world, let go.

Sometime in the mid-2000’s Mark Richt (did you know he’s the nicest guy in the world?) began loosening up on his discipline. It was shown by sending the team to dance on the field against Florida, dirty plays (cheap shots, late hits), and multiple arrests. It seems that every game that Georgia plays, they are involved in a fight. They fought Vandy a few weeks ago, people. Vandy!

The dirty play can also go back to frustration over a lack of real success over the past few years. Georgia has been at the top of the recruiting rankings for almost a decade, and what do they have to show for it? Two SEC championships. That might not sound too bad, but with the talent they are able to pull in from the entire state of Georgia, that’s not enough to be called successful.

So what else do people do when they get frustrated? They whine. A lot. See 2010. Did Auburn have some cheapshots? Yes. Were they penalized? Yes. Did they lead the game in personal foul penalties? No, but if you talk to any fan of Georgia, it’s just a known fact that Auburn is the dirtiest team in the history of college football. A simple look at facts, proved otherwise. 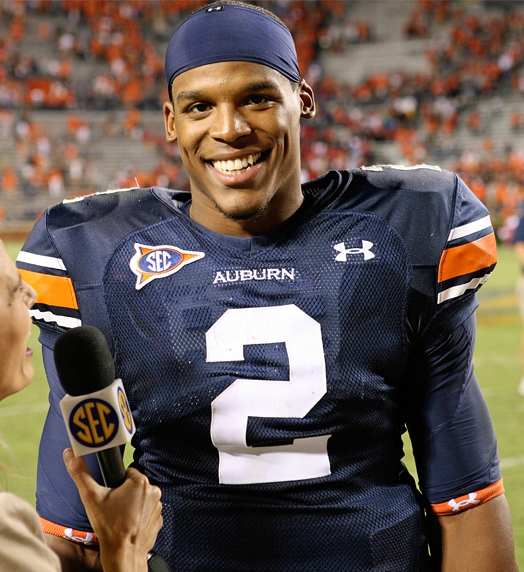 Not only is there whining about dirty play, Dawg fans still can’t get over Cam Newton. Sure, every team still throws their jab in there once in a while, but Georgia fans really, really can’t get over him. It’s pretty sad. I know he grew up a mere hour from the school’s campus that you probably never attended, but it’s over. You got beat fair and square. Move on…and would you look at that smile…

When you pick up every person that didn’t graduate from Georgia Tech, you’re bound to get some good’uns. And with good’uns you get dumb, you get morally inferior, and you get representation that most graduates would not be proud of. These people latch on to something they have no connection to, and can not take defeat when it is handed to them. This is shown by the lack of ability to move on and the quickness to fight if you remind them that Auburn has the most recent national championship as well as a winning overall record against the Bulldogs. And now I’ve turned my game preview into a diatribe on Georgia fans…

Let me just end this rant this way: I used to be okay with you Georgia, but now you’re 1-B in my ladder of hate. Grow up, move on, and act like you’ve been there, even though you never really have.

As far as the game is concerned, the only thing that concerns me is the venue. Auburn has struggled on the road this season due to youth and lack of stability at quarterback. Now that these young guys have played in three away games in very raucous venues, Sanford Stadium shouldn’t be as scary. Now that Clint Moseley has a good quality start and win under his belt, he should be able to handle what Georgia can throw at him.

Georgia may be a good team, but at this point we really don’t know how good they are. They have five SEC wins coming over 5 of the bottom 6 teams in the league. Those teams have a 5-24 combined SEC record. Everyone, including Vegas apparently, is high on the Dawgs because of this seven game winning streak after losing their opening two to Boise State in Atlanta and South Carolina in Athens. You’ll remember that Auburn beat South Carolina on the road when the Tigers were playing some of their worst football. Georgia couldn’t beat them at home even when Stephen Garcia was trying his best to give them the win.

There’s no point in talking about stats and matchups in this game because it’s usually just as unpredictable as the Iron Bowl. Emotion and luck wins this game. I’ve seen 4-win Georgia beat Auburn when they were ranked #5 in the nation. Crazy things happen, and there’s no way of knowing what could or should happen.

What needs to happen for Auburn to win is for Dyer to get at least 100 yards and Emory Blake to get one TD catch. If both of those happen, Auburn will win. As Gene Chizik says, “You can take it to the bank.”

You are aware that Georgia has won 4 of the last 5 right?

And you were aware that Georgia had only won 3 games since 1980 against Florida, but that didn’t stop you from rooting for them did it?

And you’re aware you just got your ass handed to you last night, right?

Georgia lost to South Carolina at home in Athens this year. As for the Boise State game, it was a “neutral site” game… but I mean come on… Atlanta, Georgia is a little closer to Athens than Boise, Idaho. Just saying…

That’s true…I would probably say though Boise St. might be a “tab” better than Utah State. Just saying…

Utah State was also a win. An ugly win, but a win none the less. Unlike Georgia’s ugly loss to UCF last year.

-trolling opposing fan blogs to stir the pot and show their bitterness.

Reason number. . . I’ve lost count. . . of how they closely resemble the Updykes.

Well thought out piece, WB. it about sums up my thoughts on them.

I do understand the difference between a win and a beatdown… and the best part is our coach isn’t named Gene either!

Its Sunday morning. When exactly should we expect the Auburn football team to show up in Athens????

They’ll be there 2 years from now. And on that day UGA will still be nationally irrelevant and have no more SEC or National championships than they did this past Saturday. How does it feel being the biggest underachiever in the SEC and being reduced to trolling other teams’ blog sites?

I’ll tell you what feels good: a 45-7 win. Also- assuming no miracles on behalf of UK next week, a trip to ATL in December. Ah yes, it’s great to be a GA Bulldog.

How about you log off of the computer at the public library, head back to your trailor, kiss your toothless wife goodnight and go to bed wondering if Obama’s check will reach you by morning time you classless douche!

Oooooh, good one. How about you learn to spell “trailer”?

Wow, thanks for posting that. Great read!