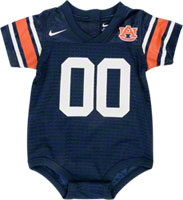 Each week, as some of you may know, al.com sends me a question or two for me to answer as part of their blogger roundtable. It’s usually nothing more than a few sentences thrown together that I am not overly proud of, but this week I decided to give it a little more thought. Here is what they asked me:

Question: Many of you are admitted fans of one program or the other. How did your fandom with your school of choice begin, and what is it you love so much about your school? What is it about the other school or its fanbase that crawls under your skin?

And here is the beginning of my response:

My Auburn fanaticism, like most, began at birth. Both of my parents attended and graduated from Auburn University. Two of my grandparents, and one great-grandfather (class of 1918) did as well. I didn’t really have a choice, and I wouldn’t have it any other way. I couldn’t see myself pulling for any other team even if I tried. Even when I was looking at other colleges in high school, I knew there was no point. I was going to Auburn.

So I took my childhood passion for the Tigers and turned it into a college education in 2004. It wasn’t until I attended Auburn that I understood what it meant to be a part of the Auburn family. Stop rolling your eyes Bama fans. I agree the whole “family” thing is a bit overused as well, and is almost cheesy at times, but the family concept does actually exist at Auburn. Hear me out.

We all know that Alabama has the larger fanbase, and we all know why that’s the case, and it’s not because Alabama has had so many more graduates than Auburn. It’s human nature to want to pull for the team that has a storied history, lots(?) of championships, and all that good stuff. So, if you have no ties to either school, why not pick Alabama? It’s the easier road, right?

You can read the rest here. I’m not promising it gets any better or any worse, but I can promise you that reading the comments from the Bama fans that like to lurk around al.com’s Auburn football page will give you at least a full afternoon of fun. Even as I post this, there are already some winners out there from those who read right past the justification of my points and my almost psychic responses to their predicted outcry. It’s fun not being that dumb, isn’t it?

I tell everyone that our great-grandfather graduated from Auburn. Here is something to make you jealous…I have his diploma…