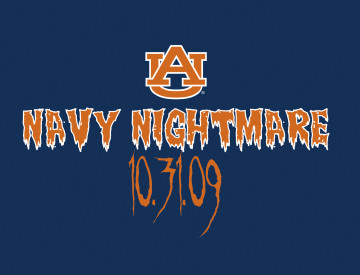 Two years ago, with the hiring of Tony Franklin, Auburn had taken on the latest fad in college football: the spread offense. Two years later, Auburn takes on another fad with their version of the “Blue Out”, but shhhh, don’t call it that. We all know what happens when all of the fans wear the same color shirt and call it an “insert-color-here out”. Well actually haven’t we done this since Tuberville anointed orange as the color that all Auburn fans should wear?

Anyway, the Auburn Athletic Department has announced that the Halloween night game with Ole Miss will be called “Navy Nightmare“. Wait, isn’t navy one of Ole Miss’s colors? Won’t they feel like they are at home? Oh, maybe we’re trying to scare them into thinking they are in an alternate universe where they are home, but are actually away. Sounds good to me.

I’ve heard from a few people that like it, and a few people that don’t like it. In all actuality, Auburn does this for every home game anyway. We have been told to wear orange to every single game for years. This “insert-color-here out” idea isn’t anything new. Oh well, so much for wearing my banana costume to the game.

What do you think about this idea?

I love it & wish we wore all blue all the time. And we did do a “Blue-Out” last year for the Tennessee game. I thought the stadium looked much cooler then all orange. Although the whole “Navy Nightmare” theme is nothing more then a sell more t-shirts stunt…which they will…so as a business strategy I applaud the J&M/Tiger Rags/Anders racket.