I know you’re tired of hearing about it, but just give me one more pre-ESPYs post. I promise from here on out you’ll get nothing but video, pictures, tweets, and other content straight from the West Coast. I just want you to know what’s going on, who’s expected to be there, what I get to do, etc. Most of what I told you before is still true, but there are a few updates. 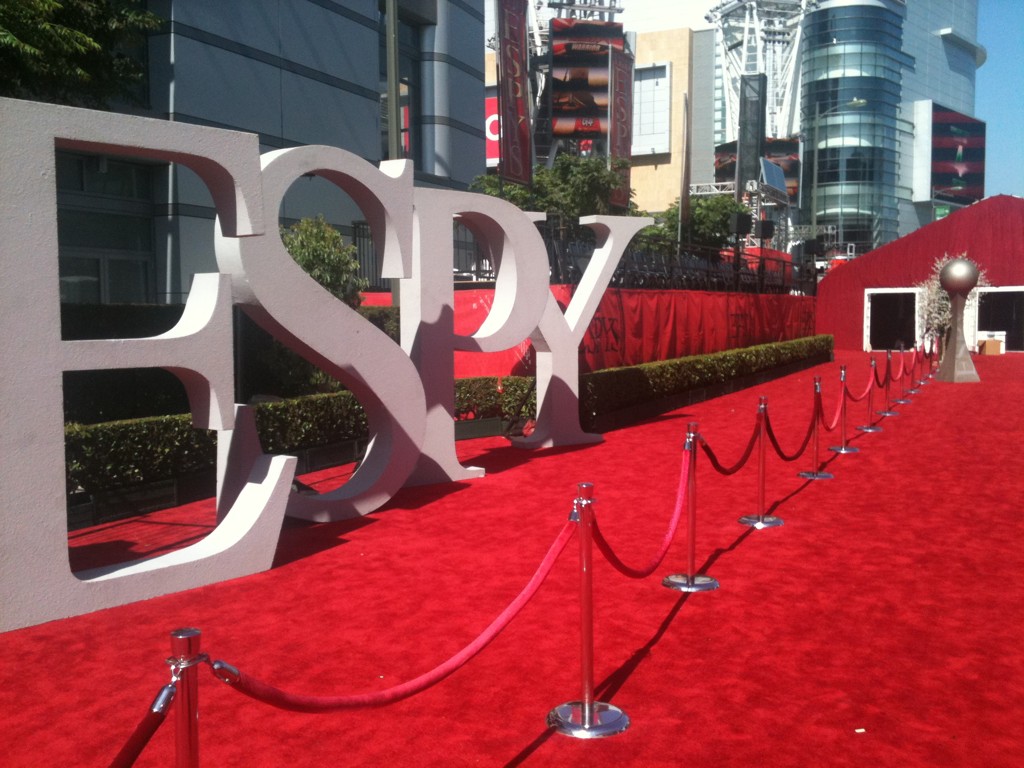 Thanks to many very generous donations, I fly out tomorrow morning at 8 am CDT and will land at LAX around noon PDT. From there I’ll go to my motel, yes motel, on Sunset Blvd. I’ll have a few hours to take a quick look around Hollywood, but around 4 pm I’ll head over to the W Hotel Hollywood for ESPN Style Studio.

As I mentioned before, this is pretty much an expo for retailers from around the world to show off and give away their new products to athletes and celebrities. As far as I know, I won’t be getting any of these products, but they didn’t call me “sticky fingers” back in high school for nothing.

Tomorrow night, I will be posted on the press line outside Club 5750 in Hollywood for the Serena Williams-hosted ESPYs party. At some point I am supposed to be whisked in for a quick look (with no camera), so I’ll let you know how it is. As far as I know, I won’t be in there for very long, but they didn’t call me “hide-n-sneak” back in middle school for nothing.

On Wednesday, I’ll do what people do when they visit L.A. (look for Tom Cruise and go to O.J.’s old house) until around 3 pm when I’ll head downtown to the Nokia Theater, right across the street from the Staples Center. Nothing much has changed with these plans from before, but in case you missed it, I’ll be on the red carpet interviewing whoever will stop for me. Chizik, Cam, and Fairley will be sent to me at some point where I will try to get through a few questions without screaming “OH GOSH, I LOVE YOU!”

Once the show starts I’ll go to the press tent where the winners will do a quick press conference after coming off stage. I assume the presenters will stop by, too. Speaking of presenters, the list is pretty awesome (Brooklyn Decker, *gulp*). There isn’t a full list of scheduled attendees yet, but it should be released in the morning. When it is, I’ll post it here. I do know that Mr. Bieber will be there, though.

I have no idea what I’m doing after the show, but I’ve been told that the bar where the Los Angeles Auburn Club hangs out, perfectly named Big Wangs, is very close to my motel. Maybe I can meet a few Los Angeles-based Auburn peeps up there. If that describes you, leave a comment below.

I have most of the day Thursday to do more touristy stuff, and then fly back home around 4 pm. At that point I will go full bore into information organizing/video editing mode to get you the biggest and best Auburn-themed ESPY post out there.

Thanks again to everyone who gave their hard earned money to help with the trip. I definitely could not go without it. WDESPY.

Have lots of fun! Can’t wait for your posts! WDE!!!

Good luck. As a former resident of LA, my only advice is to triple the amount of time you think you’ll need to travel from one locale to another, and then double it. Have a blast!

The Lyrics, “L.A. ain’t nothing but a freeway” were written for actual life sucking reasons, which may limit your tourist experience to a walking tour of Hollywood. Great work snagging lodging on Sunset Blvd though. Can’t wait to hear more.