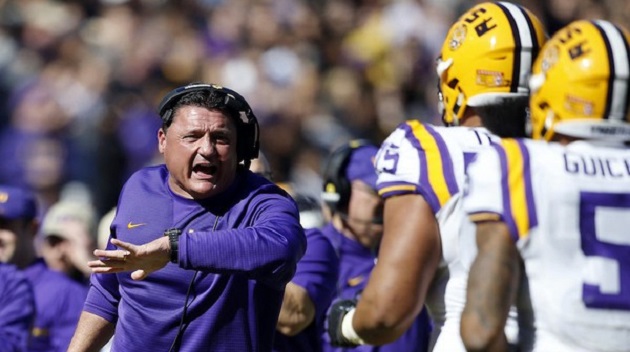 James Moran (@SmartestMoran) is the associate editor of Tiger Rag Magazine in Baton Rouge, where he covers the LSU football and baseball beats. This is his first appearance on the ‘Blogle, and I would describe his mood as… meh, LSU football, whatever. Other than that, he’s… WAIT, WHAT DID HE CALL CAM?!

I’d say most people around Baton Rouge realize Auburn is a step above LSU in terms of talent right now.

2. What’s the vibe like in Baton Rouge after the loss to Troy and the missed XP win over Florida?

There was definitely a sigh of relief in and around the program after the Florida win. After Troy, it was legitimately pondered if LSU would win another game this season. The team at least demonstrated it hadn’t packed in the season yet.

Absolutely. Considering his buyout, it’s hard to imagine a disaster scenario severe enough that he gets fired after one year. LSU is already paying a huge sum of buyout money to coaches as is.

If you’re not familiar with inside linebacker Devin White, you will be by the end of Saturday. He’s all over the field and leads the SEC in tackling.

Offensively, I suppose Russell Gage. He runs LSU’s jet sweeps (a huge part of Matt Canada’s offense) and has a propensity for hurdling defenders.

In terms of LSU’s defense, it’s got to be Kerryon Johnson. They’ve had intermittent issues stopping the run this season, and while the defensive front is getting stronger each week, Johnson is rolling downhill right now.

In terms of LSU’s offense, they’re worried about whoever Auburn rotates in along the defensive line. LSU could start three true freshmen along the offensive line as both of their starting tackles are battling injuries. That’s the staff’s biggest concern by far.

I think Auburn is a much deeper team along both lines of scrimmage and has the edge at quarterback and the kicking game. I’d say LSU still has a good enough secondary to blanket Auburn’s passing game if they can find a way to stop the run.

Cam Newton won me a fantasy football championship once and was the most spectacular college football player I’d ever seen, so we’ll go with him even though he’s kind of a dick. Cadillac Williams had a pretty sweet nickname.

I’m not really in the business of making score predictions, but I will predict that if the winning score is more than 20 points, LSU did not win the game.

I think LSU goes 7-5 or 8-4. Can’t foresee any better than that with Auburn and Alabama left on the schedule. Still think Auburn wins 10 games, as I picked before the season.

10. Did you know that neither Auburn nor LSU invented “Sailor Mike?”

I did not know that. You learn something new every day.

Straight up interview. Outside of Auburn, Cam has his share of detractors. No one can argue his talent which is the point of relevance punctuating most conversations I have about Cam. You can invite this guy back next year. The other guy was kind of a dick. :o)