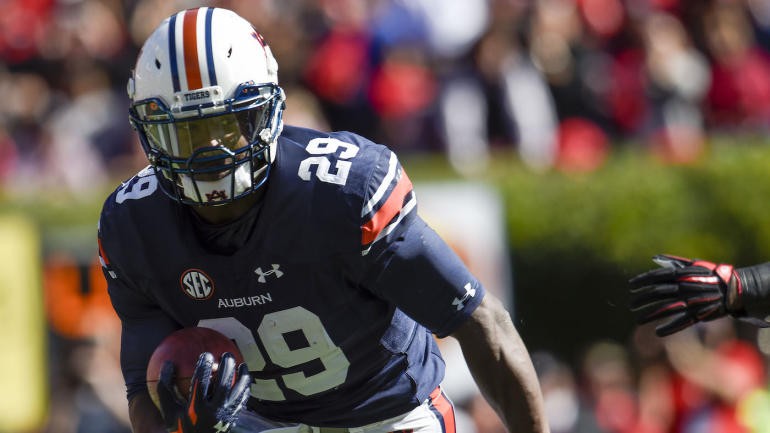 On Wednesday, Auburn coach announced that Jovon Robinson was no longer a member of the Auburn Football Team due to violation of team rules. Although the coach did not mention the specific rules that Jovon violated, it is speculated that his dismissal was a culmination of several discipline issues that Jovon had during preseason practice. Jovon was absent on Wednesday during the first fall practice of the team. Fans and even sportsbooks are worried about how this might affect their college football odds.

Gus Malzahn, Auburn head coach insisted that his team aimed for zero distractions this year. He wished Jovon all the best after releasing him. In the statement, Gus said that Jovon did not meet the team standards and did not have what it takes to play in the Auburn Tiger Football Team.

In 2015, Jovon finished with three touchdowns and 639 rushing yards. Jovon had picked an ankle injury during the beginning of the season and he was struggling with it. In the Birmingham Bowl 2015, Jovon earned one touchdown and 126 yards against Memphis where they won 31-10; Jovon was therefore named as the most valuable player in the climax of Auburn’s 7-6 season.

In a statement, Jovon accepted that he had changed a little in the past spring and was looking forward to becoming the next 100 yard rusher title. However, he became the second Auburn player to be dismissed due to off-the field issue. In 2015, D’haquille Williams was suspended before the start of the season and dismissed three weeks after the season began.

In 2015, Williams began the season as a potential pick for first-round NFL draft and was expected to be a top target. He had had an incredible season with the Tigers with five touchdown receptions and 45 catches. However, things got worse when he failed to gain momentum in the team. To add salt to injury, he punched teammate Xavier Dampeer which resulted in dismissal from the team. Malzahn said that it is a bad feeling to dismiss a player, but as the coach, you have to do what is best for the team.

On Wednesday, Auburn used sophomores Chandler Cox, Kerryon Johnson and Kamryn Pettway instead of Robinson. Pettway will be seeing more opportunity at tailback this year according to the coach. The coach expressed his confidence in him citing that he had shown his potential at the tailback during the spring.

Auburn is experiencing a major battle at quarterback and Robinson’s absence is a major setback. With Wednesday’s announcement it seems that every skill position player is short on experience. Despite the crisis, offensive tackle Austin Golson said that the coach did the right thing.

After Wednesday workout, Marcus Davis, Auburn wide receiver said that he and the rest of the team had not been informed what kind of violations led to Robinson’s dismissal. The coach however said that he told Robinson that he had been dismissed from the program before Wednesday afternoon practice.

Despite being praised for improved behavior and performance by Auburn coaches, Auburn will have to play without a key player in the backfield. However, Golson re-assured the fans that they have all the players they need.

Stories of Your Auburn Dads