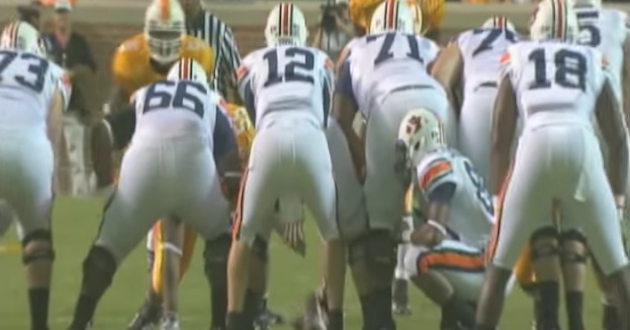 In the 3rd quarter of Auburn’s 26-10 win over Texas A&M this past Saturday, with his team already up 20-3, Gus Malzahn decided to call the play he has dubbed “Woody.” In that play, the smallest/fastest guy on the team, in this case freshman wide receiver Ryan Davis, crouched behind the offensive line before the snap.

Jeremy Johnson then took the snap, quickly handed the ball to Davis and ran some play action to the right side of the field. The defense bit on it terribly, so Davis waited a second or two and ran for a 1st down on the left side. It was the perfect execution of the play.

While this was the first time I remember Malzahn calling it as a head coach, he has run it a few times before as an offensive coordinator. The last time we saw the play was in the 2010 SEC Championship game on Auburn’s opening drive. Onterrio McCallebb was the small/fast guy, and the play didn’t work at all. It didn’t matter, though, as McCallebb scored a receiving touchdown on the next play.

Before that, in a win at Tennessee in 2009, Travante Stallworth’s number was called in “Woody.” It was the first time it was run at Auburn, as was noted on the Blogle back then, and it worked well.

But the very first time we saw the play was in a loss to Arkansas in 2006. And yes, he called the play as the Razorbacks’ offensive coordinator. I hated it because it worked, and was one of the worst parts of one of the worst games in Auburn history. The Tigers were ranked #2, and as always, Arkansas ruins everything. Anyway, Reggie Fish was the guy in this one (which is why I tweeted this last Saturday).

Update: Thanks to @WarRoomEagle (follow him because he will make you feel dumb about football), we can now see that Gus ran “Woody” with a fake-give/pass during his time at Tulsa (between Arkansas and Auburn). He was trick-playing his trick plays, people.

Update #2: As I was watching Auburn-Clemson 2010 in preparation for the 2016 opener, I noticed that Gus had called Woody yet another time, during the 2nd quarter, down 10, after the first 1st down of the game for Auburn. It worked, but the game didn’t turn around until the 2nd half. That makes six Woodies spotted in the wild. Have you seen one? Send in the proof!

So now that this play has gotten some heavy attention nationally, it’s probably going to be a little bit of time before we see it again. But if it’s run quickly enough, like Auburn usually does, it won’t matter. It always seems to be good for a 1st down.

Talking ESPYs and Investigations on Cubelic & the Kid