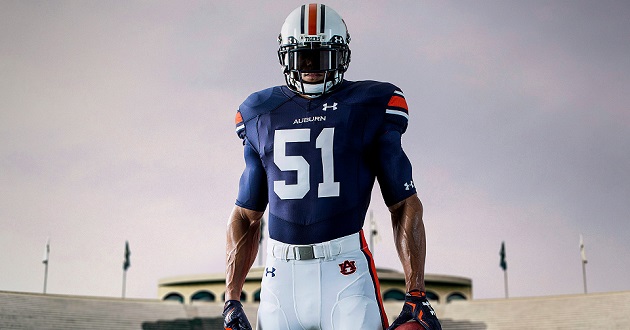 It was announced yesterday that Auburn and Under Armour had struck a deal to continue their agreement until at least the 2025 academic year. This is a great news because I love Under Armour and I hate Adidas. Last night, Jay Jacobs took to Microsoft Outlook to let the important people know about the deal and what it entails. Now you’re all important people.

You may be familiar with the Under Armour story. It is much more than just another anecdote about the American Dream made possible by hard work, a great idea and good fortune.

It is the fascinating narrative of one man’s burning passion and a relentless pursuit of success against all odds.

Under Armour’s success is really the story of Kevin Plank.

As Forbes tells it in a “Forbes 400” web feature, Kevin got kicked out of high school after brawling with Georgetown University football players. He walked onto the football team at the University of Maryland after being overlooked by college recruiters.

Kevin became a special teams “bruiser” and was voted team captain. He soon noticed that his teammates in the locker room were all wearing heavy t-shirts soaked with sweat. That’s when he came up with the idea of a lighter weight shirt made out of the same fabrics as women’s undergarments. He made a discovery that would forever change the sports apparel industry: the lighter materials were more comfortable than an old cotton t-shirt. The materials also did something else. They wicked away sweat and moisture better than any product ever made.

Kevin began selling shirts out of his grandmother’s basement after graduating in 1996. Today, Under Armour’s sales approach $4 billion annually.

I met Kevin nearly a decade ago when we started talking about the possibility of Under Armour becoming our exclusive apparel and footwear provider. We had an opportunity to be their first university partner, which put us in a unique position to align with a company that shared our values and had a strong commitment to innovation and customer service. I knew that if we were the first, Under Armour’s commitment to our success would always be strong no matter how much it grew.

The company’s innovative products were impressive, but I soon realized Kevin and I shared more than a passion for college athletics. We shared many of the same values.

From the beginning, Kevin admired and appreciated Auburn University and the values it represents. He is a family man who believes in hard work and the relentless pursuit of excellence.

While it is hard to relate to one of the world’s most successful entrepreneurs in many ways, I realized over time we had at least one thing in common. We were both walk-on football players who had to fight for everything we earned.

Our stories are obviously quite different, but I can personally relate to Kevin Plank. He made Under Armour just like Auburn made each of us. He knitted it together one thread at the time into something stronger than anyone ever thought it could be. That sounds like the Auburn Family’s story to me.

Under Armour has soared to unimaginable heights since the days Kevin would exaggerate its size to open doors, but he hasn’t changed at his core. That is why he took a sincere personal interest in the negotiations of a long-term extension designating Under Armour as the official outfitter of Auburn Athletics through 2025.

This is an important day in the life of Auburn because of what it will allow us to do for our student-athletes now and in the future.

The extension with Under Armour announced today gives us the strongest apparel and footwear partnership in the Southeastern Conference and one of the top five in the nation. I want to share with you a little about what was important to me during the negotiations.

The impact on our student-athletes and coaches was my highest priority, because my goal is to provide the best student-athlete experience in the nation.

Our research shows us prospects pick Auburn based on a number of factors, with coaches and culture high on the list. Our investment in quality coaches, support staff and facilities are important for recruiting but they are critical for the success of our student-athletes once they get here. It is all about enhancing their experience as athletes, students and human beings with goals and dreams.

The deal we have with Under Armour is yet another key piece to the bigger puzzle of providing the best student-athlete experience in the nation, just like our world-class Wellness Kitchen, the spectacular student residence hall across the street, top-notch academic facilities and support and the many new practice and competition venues we’ve built in the past decade. It all ties together.

The new deal elevates our allotment of Under Armour products to a far higher level. It was important to me to make sure every single of one of our student-athletes across all 21 sports has the apparel and footwear he or she needs to make their experience at Auburn as good as it can possibly be.

The financial terms are vitally important, because the extension clearly maximizes revenue for Auburn Athletics. As mentioned earlier, this is one of the top five deals in the nation. It is worth $78.1 million over nine years, or $8.68 million annually.

One unique aspect of the extension is the new deal includes $10 million in Under Armour stock. The strategic decision to have a significant ownership stake in the company is a big win for Auburn and our future.

College athletic programs like Auburn have a limited number of partnerships from which we derive substantial financial support. That is why today’s announcement is so significant. Our partnership with Under Armour provides the level of support we need to give our programs the resources required to compete at championship levels. We have given all of our programs the resources and tools they need to compete at the level we all expect.

This announcement is also important because the Under Armour brand is a difference maker from a recruiting and competitive standpoint. I appreciate the company’s commitment to developing innovative products that give us an advantage in both areas. The greatest athletes of tomorrow connect with the Under Armour brand in powerful ways. If you have children or grandchildren or just know today’s youth, you realize how much they love Under Armour products. Many don’t want anything else.

The terms of this extension also make it clear that one of our mutual objectives was to promote and enhance the Auburn brand. We negotiated into the deal increased marketing dollars and a different royalty structure that includes a new royalty guarantee to benefit our bottom line.

The most important point is this: Auburn Athletics is committed to winning and to providing the best student-athlete experience in the nation. Under Armour is equally committed to that goal because our success is also their success. A great partnership was born nearly a decade ago, and it has only gotten stronger since.

I want to thank the members of my staff who helped make this day possible. I also want to thank Kevin Plank and the entire Under Armour organization for working through tough negotiations that will prove mutually beneficial for years to come.

We did it the Auburn way, and the Under Armour way. That’s a winning combination any day of the week.