How I Remember It: This game has to be the most played “College Flash Classic” in the history of television. I have to delete it from my DVR almost everyday, but leaving at least one to watch, of course. I have watched this game, or at least the 4th quarter, more than any other Auburn game ever, so it’s going to be tough to separate what I really remember from the game and what I’ve seen a thousand times on Fox Sports South.

Actually, it won’t be too hard because I know that when Auburn began it’s awesome comeback, I was in the car with my Granny, going to pick up my little brother from a birthday party at the Rec center. We were getting gas at the Shell station on 2nd Avenue in Opelika when Jim Fyffe announced yet another interception. I remember Granny saying something to the effect of “WHAT?!”, or something like that. Other than that, that’s all I really remember from that day.

What Really Happened: Auburn came into the game on a 14-game winning streak going back to the 1993 undefeated season, and was ranked #11 in that nation. LSU came into the game 1-1 and was unranked. The Good Tigers should have had no problem beating the Purple Tigers.

The two teams combined for no points in the first quarter, but Auburn would take a 3-0 lead after a field goal early in the 2nd quarter. One minute later, LSU would score on a 76-yard touchdown pass. On LSU’s next possession, running back Jermaine Sharp fumbled and Auburn recovered the fumble in the endzone for a touchdown. Matt Hawkins then missed the first extra point in Auburn’s last 75 tries, to keep the score at 9-7.

LSU added a field goal just before the half to give the Purple Tigers the 10-9 lead at halftime.

The first four possessions of the 2nd half would go as follows: Auburn punt, LSU interception, Auburn fumble, LSU fumble. This showed that this game wasn’t going to be anything close to normal, but when has any Auburn-LSU game been normal?

LSU scored first in the 3rd quarter with a field goal, and following yet another 4-and-out by a struggling Auburn offense, the Purple Tigers extended the lead to 20-9 with a touchdown. 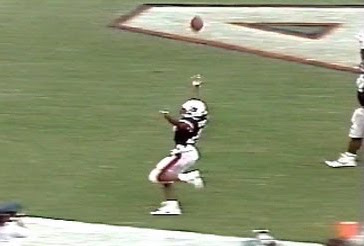 Despite the back-to-back interceptions returned for touchdowns, LSU showed that they weren’t going away by driving down on their next possession and adding another field goal with just over five minutes in the game.

Following what seemed like Auburn’s hundredth 4-and-out of the game, LSU’s next possession ended with yet another interception returned for a touchdown. This time it was Auburn’s Brian Robinson.

Down 30-26, LSU then drove to the Auburn 25-yard line, but Howard was intercepted again by Robinson, who returned the pass for 36 yards before fumbling. LSU recovered the fumble giving them another shot at the win.

Can you guess what happened next? Yep, Howard was intercepted for the fifth time of the game by Chris Shelling.

Auburn would take a knee as time expired to win one of the craziest games in Jordan-Hare history.

Why did I pick this game? This definitely wasn’t one of the prettiest games in Auburn’s offensive history. In fact, the offense scored zero touchdowns. Thirty points. No offensive touchdowns. That’s pretty rare. However, the defensive performance in the 4th quarter alone put this one in the list, and given the magnitude of the comeback that extended Auburn’s win streak to 15 games, there was no way this isn’t in every Auburn fan’s top 5.

Play of the Game: Fred Smith’s interception to tie the game in the 4th quarter gave the team a second chance to win after being so far behind late in the game.

Player of the Game: I know this is a little Disney-movie-ish, but I’m giving this one to the entire Auburn defense.

Quote of the Game: “I think we’ve seen something maybe historic. I’ve never been in a game like that. I’ve never seen one. We couldn’t get a first down. Our offense offered no help, no chance of coming back.” – Terry Bowden

My Beef with Early Kickoffs