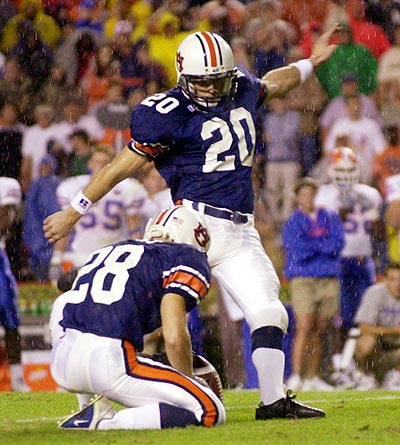 How I Remember It: Florida was the best team in the nation at the time. They had Rex Grossman, Jabar Gaffney, Reche Caldwell, and of course were led by Steve Spurrier. Not one person in the world gave Auburn a chance. I don’t even think Florida brought their punter. Seriously.

It was windy and drizzly the whole game. The score was close, but Auburn pretty much manhandled the Gators all night. Florida had negative rushing yards, and besides one long pass play where Gaffney was wide open, the Tigers stopped the nation’s most explosive offense.

I remember, even from my view in the student section, that Damon Duval’s winning field goal looked wide right, but when the fans in the endzone went crazy, I knew Auburn had just done the “impossible.” I also remember my fellow students rushing the field and tearing down the goalpost. Once they were done, the chain link fence inside the hedges around the field was pretty much gone.

Just like yesterday’s entry, we all know he made the kick, and the rest is history.

Quote of the Game: “This feels great. To come out and beat the No. 1 team in the nation feels great. The defense did what they had to do to stop them, and the offense played tough all game. I have the easy job. For the third week in a row, I just came out and put it through the uprights. I really wasn’t nervous at all.” – Damon Duval

beAU Knows: What I Saw, What I Think We’ll See

I commented on the other story about being in the band for this game on the other list, but my 2nd favorite in game memory (other than the kick)…

Do you remember Spurrier being so frustrated that he sent his punt team in on 3rd down in the 3rd quarter? Tubby called time out cause he didn’t think he was serious, but coming out of the time out, Spurrier punted on 3rd down.

Florida had -46 rushing yards for the game. The field was rushed, the goal post came down, and I was all up in the mix. Amazing game. The loudest I’ve ever heard that stadium in person. Everyone went nuts on any play where the AU D held UF to 5 yards or less. Nuts.