How I Remember It: I watched this game at an RV that was parked by the tennis courts (now the outdoor pool by the new Student Rec Center). I’m not sure who the guy was that owned it, but he was a mean old man. My dad was there and I think one of my brothers was as well.

The game was a little rough for a while, putting the mean old man in a worse mood. Even better, he wanted to listen to the Auburn Network broadcast instead of listening to the tv announcers. The only problem was that the radio was good 3-4 seconds ahead of the tv, so we were hearing the play before we saw it. A few people brought it up, causing the old man to tell them it was his TV and if they didn’t like it they would leave.

A little while later, a few Alabama fans walked up behind everyone and started watching the game. When Alabama had a good play or Auburn had a bad one, they would cheer. How do you think the old man took that? Yeah, he pretty much tried to fight two men half his age, saying they couldn’t watch his TV because they were Bammers. I had found a new hero.

Everything was all better when Alabama fumbled and Jaret Holmes kicked the game winning field goal to give Auburn the one point victory and the SEC West Championship. The only real visual memory of this game that I have happened just after Holmes’s kick went through. I looked over at my dad and he had a look of shock and bewilderment yelling “HE MADE IT!” 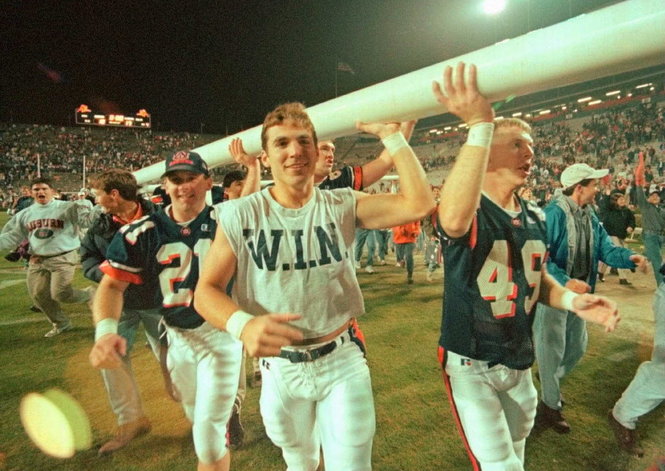 After the game was over, I went to the stadium and walked right in. I saw the players tear down the goalposts and send it into the crowd. As the goalposts made their way up to the top of the lower bowl, the stadium announcer, Carl Stevens, had to ask the students not to throw it over the edge.

It was a so-so performance by an Auburn team that should have blown out Alabama, but the fireworks at the RV held me over until the awesome ending.

As always in the Iron Bowl, the records and rankings didn’t matter, and as cliche as that idea has become, it always seems to hold true. Alabama held a 17-6 lead going into the 4th quarter, but Dameyune Craig led the Tigers on two scoring drives that ended in a touchdown, with a failed 2-point conversion, and a field goal.

The score was 17-15 and Alabama had the ball, needing to get a first down or two to drain the clock and win the game. However, on a very questionable play-call, the Tide ran a screen pass that was caught and then fumbled by fullback Ed Scissum. The Tigers recovered the kick in Alabama territory, giving Jaret Holmes a chance to make the game-winning field goal.

We all know he made it, and the rest is history.

Why did I pick this game? Auburn beating a 4-win team by a field goal at the end wouldn’t normally make any sort of positive list, but that team was Alabama, and that field goal sent Auburn to the SEC championship. On those factors alone, this game definitely has to be in the top 10 games.

Play of the Game: Obviously Jaret Holmes’s 39-yard field goal with 15 seconds remaining to beat the Tide takes this one.

Quote of the Game: “It was one for the record books, one for the museum. It was the best kind of win that we could have hoped for in this kind of traditional game.” – Terry Bowden

A Locker Room Full of Champions

Interesting Tidbits on the NBA Draft, Baseball’s Bullpen, and Football

Love how it ends with Bama attempting a 57 yarder

Best part of that game was that Coach Bowden punted the ball with 2 minutes to play instead of going for it on 4th down. As it turned out, Bowden looked like a genius.
Another detail is that Martavious Houston was the safety who put the hit on Scissum to knock the ball loose. Houston was in his senior year of a disappointing career, after coming in as a freshman with a lot of hype but then getting injured and never really regaining his swagger. In one play he turned his fortunes around and cemented his name in history.

Thanks for the input, Graham.