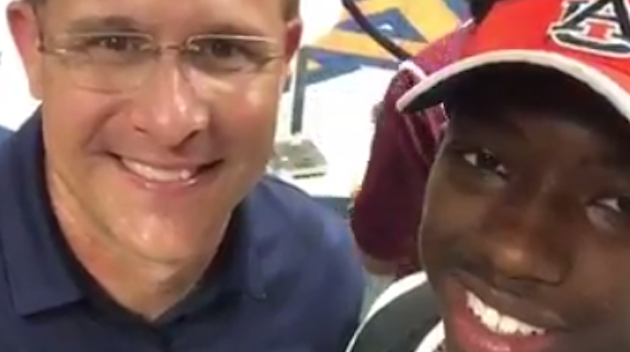 It’s Big Cat Weekend in Auburn this weekend. That means the nation’s biggest recruits and Auburn’s top targets are on the Plains.

Donta Evans is a consensus 3-star linebacker from Lawrenceville, GA who has offers from the likes of Louisville, Missouri, Iowa. He also has offers from Vanderbilt and Wake Forest, so he’s a smart guy, right? Well, pranking the head coach and your potential defensive coordinator with the classic “let’s get a selfie, but really it’s a video” joke doesn’t seem that smart.

Ok, so Muschamp seemed to get it, but watch as Gus gets got. He gets got good, and I still don’t think he understands what happened.

Update: Evans actually got one more coach before he left Auburn. This time it was Lance Thompson, who would actually be his position coach if they decide to keep the offer on the table after these shenanigans.

Highlights of Auburn’s 52-21 Loss to Alabama