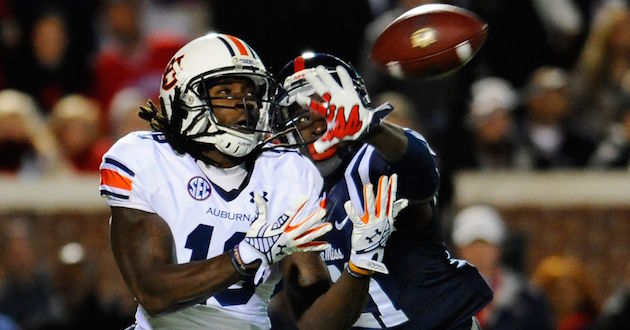 The 2015 NFL Draft included picks of Jameis Winston, Marcus Mariota, and Todd Gurley, but those aren’t that important. The most important were the five Auburn Tigers selected in the 2-day, 7-round event. This is the most picks for Auburn since five were selected in the 2008 NFL Draft.

Sammie was the lone Tiger to forego his senior season to enter the NFL draft. After missing out on the 1st and 2nd rounds, I was beginning to wonder if he had made a good decision. Selfishly, I thought he needed to stay another year, but considering he had already graduated, and had made a name for himself over the last two seasons, and was a physical specimen, you couldn’t blame him. But you have to think the 3rd round was the absolute worst he could do in this year’s draft.

I was pretty sure Angelo was going to be drafted, but I didn’t think he’d be the 2nd guy from Auburn taken, and especially the first defensive lineman. I really like him, he just seemed to be hidden in an underachieving line this last year. The Titans took another Auburn defensive lineman a few years ago in Zach Clayton. Maybe they like what they see in Auburn guys.

Nick Fairley left Auburn after the 2010 season. Gabe Wright was a part of the 2011 signing class and wanted people to ask “Nick Who?” when he showed up. Remember the hat? Nick Fairley left the Lions in March to go to the Auburn St. Louis Rams. Gabe Wright has seemingly taken his place in Detroit. Wonder if he’ll wear the hat to his first press conference.

Uzomah sometimes got lost in blocking assignments, but he’s an absolute physical freak. Tall, strong, can throw, can catch, can run, can everything. He was seemingly drafted on potential and physical attributes alone. That says a lot.

Being a lifelong Falcons fan (because I grew up close to Atlanta), the Panthers sure are trying to hard to bring me over. Cam will meet Cam in Carolina and complete an all Auburn backfield. I will pull for them, but I’m not giving allegiance yet.

With the 174th pick in the 2015 #NFLDraft, the #Panthers select RB Cameron Artis-Payne from Auburn. #PanthersDraft pic.twitter.com/vCwYa1bDTX

For whatever reason the Rimington Award-winning center, Reese Dismukes, was undrafted. He will definitely get picked up on a free agent deal.

QB/DB Nick Marshall’s switch to defense for the NFL is most likely a good idea in the long run, but it definitely hurt his chances at getting drafted.

Update: These Tigers have been picked up for free agent deals, minicamps, or invited tryouts.

DL Jeff Whitaker and DL Ben Bradley are the remaining Tigers that are awaiting FA deals or tryouts.