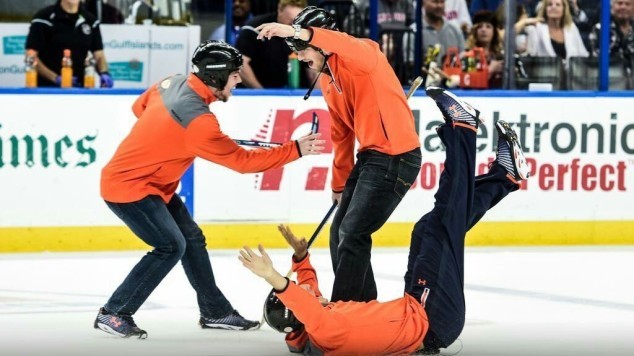 Part of the whole bowl experience is taking in the sights and sounds of the host city. Tampa Bay offers many sights, many sounds, and many sporting events/venues.

Over the weekend, both Auburn and Wisconsin attended a Tampa Bay Lightning game. At halftime, three players from each team took part in a shootout. That’s so unfair, Wisconsin is to hockey as Auburn is to awesome. But wait, quarterback Ben Durand, safety Mack Vangorder, and kicker Alex Kviklys actually won the thing. Here, watch Auburn dominate those yanks at their own game.

A few days later, the competition was taken to the lanes, and again, Auburn beat Wisconsin at that as well. Maybe eating beef and cheese isn’t the best training regimen.

Seriously, do we even need to play the football game anymore?

Philip Lutzenkirchen Teaches the Iron Bowl Hour How to Lutzie