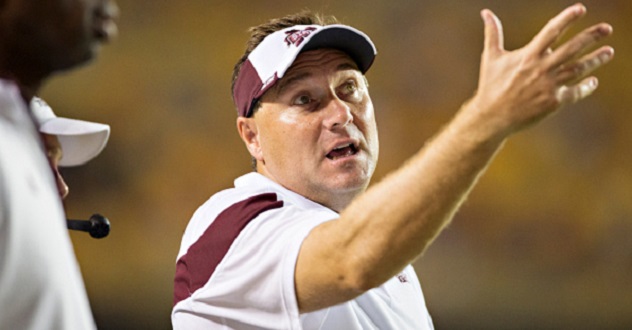 Josh Barnhill is the lead writer for MaroonandWhiteNation.com (@mandwnation), and graduated from Mississippi State in 2007. You’ll remember Josh from years past as the guy that grew up an Auburn fan in a family that was mostly Auburn. He got off course at some point and has never found his way, and according to these answers, man, is he as off course as ever. He hates us.

1. What is a Mississippi State fan’s first thoughts of Auburn football right now?

There are three different ways I could answer this.

Auburn fans: we want to beat the crap out of y’all because you’re so annoying.

Auburn football program: we want revenge for the last five years of heartbreak.

2014 Auburn team: y’all are the champs and to be the man you have to beat the man – Auburn is the best team in the SEC right now.

2. Given that the Bulldogs have reached their highest ranking ever, what’s the feeling like in Starkville: confusion, cautious optimism, or all out homering?

I’d say from the time the game ended until the end of the day Monday it was like a dream, wondering if this is all really happening. I had butterflies in my stomach for two days straight. But since Tuesday I’ve been focused on Auburn and I really think this is a great matchup.

3. Is this weekend’s game the biggest game in Mississippi State history, or at least at Davis-Wade Stadium?

Yes and no. Here’s what I mean: it’s the “biggest” from the standpoint of we’ve never played in a game between two top 5 ranked teams, or when College Gameday was there, and CBS hasn’t broadcast a game from Starkville since 2005. So as far as attention and spectacle, this would be the biggest, certainly at DWS.

4. Who are two bulldogs that Auburn fans may not know of, but should be worried about?

Matt Wells at OLB. He’s 220 lbs and runs a 4.4 – the best sideline to sideline player we have on defense, he is everywhere and a sure tackler.

5. Where do you see Mississippi State having an advantage over Auburn?

Auburn is a pretty compete team so there’s no area I can really say MSU should have a distinct advantage. But I will say everyone said LSU’s OL was the best in the SEC before we played them. Then people said A&M’s OL was the best before we played them. State’s D-line is legit and is by far the best Auburn has played so far this year so we’ll have to see what happens in that matchup.

6. What aspects of Auburn’s game worry you the most?

Probably Sammie Coates and Duke Williams. I think State can at least contain the running game to a certain extent, but those are two really strong receivers who can make some plays even when you’re draped all over them.

7. Has Dak Prescott given Dan Mullen and State fans enough to forget losing out on Cam?

If we win this game I’ll say yes.

Honestly I think it’s dead even except Auburn has a better FG kicker. I’m a State fan and it’s in Starkville so I’ll say MSU wins 28-27.

Both teams are going to try to stop the run and force the other team’s running QB to throw it, but I think both QBs are capable of getting it done through the air too. Both OL and DL are really good for both teams. They both have good RB and WR. I just don’t see a weakness for either team. Gus Malzahn is unquestionably one of the best play-callers in college football, but Dan Mullen has started calling plays this year and things could not have gone better.

It will come down to who executes their blocks better, who makes their tackles, and who turns the ball over. I really think this game has the potential to be a classic.

My initial projection of MSU was 8-4 (Mullen had to prove to me he could win a big game and he has) and Auburn 9-3. If I stick with my prediction of State to beat Auburn this week, I’d say we end up 11-1 on the year losing to either Alabama or Ole Miss. Auburn has a brutal schedule and I see them losing at least two of them so 10-2.

10. It’d be cool if y’all followed SEC rules and kept the cowbells quiet during plays.

We plan to follow the rules, and have done a good job otherwise the SEC would have voted to take them away, and we would’ve been fined more than twice in five years. Y’all are seriously the only fanbase that bitches about the cowbells. Not even Ole Miss complains about them. I guess y’all want to continue the legacy of Shug Jordan and continue to whine, but it’s annoying. Y’all are the most annoying fans in the SEC, and there isn’t a close second. All I’ve heard all week is about how awful cowbells are. Hack up your skirt, grab your balls, and get over it.

Cowbells are pretty annoying tho

Remember, the only reason they even need the cowbells is so their little stadium can be almost as loud as a real SEC stadium.

This guy has made me hate them a little more than I did before I read his comments. We’ll add another TD on for his whining about Auburn fans.

This post was trashy and out of character for WarBlogle. You need to show some basic decency and go back and edit this. The faux machismo plays true to the pop culture caricature of Mississippi state.

I’ve been in the Marine Corps and done many other salt of the earth/hyper-masculine type things over my life, and I don’t feel the need to do this.

Josh, you represent yourself poorly.

BlogAdmin, the same goes for you. Go back and pull this post out of the gutter. It wasn’t funny or witty. It was vulgar, tasteless, and devoid of creativity.

You can make trashy, vulgar remarks like that when you are a nobody blogger from BF Mississippi. I bet it takes a while to maintenance your site using dial up. I just wish I wasn’t going to have to drive to Tupelo after the game to find a restaurant equipped with more than a deep fryer and a toothpick dispenser. WDE!

I agree with all the previous comments. This interview took a wrong turn down Mean Street. :-(

Confused by these commenter complaints–Blogle used the same format he does for every “From the Other Sideline”. Does he throw a few jabs out there and try to strike a nerve? Yes, every week. All in jest. Entertaining, funny post. Enjoy them every week. Keep em coming. WDE.

I don’t care about the guest columnists being a troll. That is part of these posts. That is the fun of it.

What I’m saying is that this post was lewd and vulgar. I don’t always read everything on this site so I don’t know if Blogle is a typically vulgar guy. But, the site admin has bad taste to allow vulgar posts telling me to…….Well, just read the end for yourself.

If this site wants to sit in the gutter with vulgar comments, that is the admin’s decision.

Why do it in the public domain?

Oh, and before you start saying to me: “what a little choir boy” or “quit patronizing” I’ve done more over the top masculine things in my life than 99% of most American men. I answer to very few in this regard. And, rest assured, your vulgarity is a mark of uncultured conduct that more closely comports with the most wretched SEC “shock jocks” rather than that of a Lee County man with good taste.

Ask yourself, is this how I’m raising my sons? to be lewd and crass? while trolling (albeit for fun)???

The bottom line is I don’t mind the trolling for fun; that isn’t my point. I think you have poor taste to allow this guy to be vulgar. It is your site and forum, so what does that say about you.

I thought it was a good post. Nothing wrong with a little fire. Plus, I lost all the pity I’ve had for MSU for years. Beat their dadgum eyes out.

These From the Other sideline post are always good and everyone knows Blogle always takes a shot at the other team on this last question…it’s always in fun…never personal or mean spirited…as you can see by the writer’s response to the last question MSU fans are sensitive about their cowbells…oh well…WAR EAGLE!!!!

At least he has no credibility to lose, seeing as how he writes for a Mississippi school.

I didn’t understand what was so vulgar about it? Was it he said balls? I hope not. I can’t believe there was a Marine on here complaining about it. Maybe he should have joined the air force. I know in the Army we don’t think this is very vulgar.