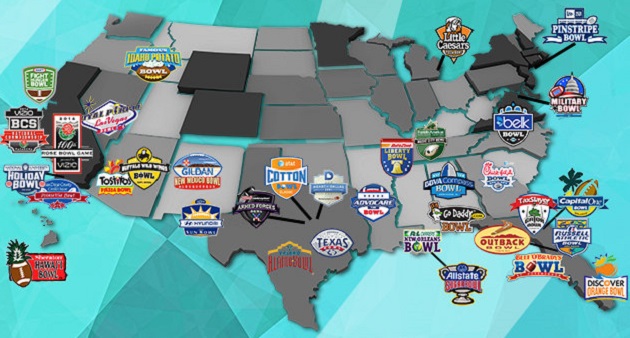 I made a pretty big jump in accuracy (from 77%) with my overall regular season predictions this year. It’s a New Day, right? Let’s see how it translates to the bowl games, though. There are 35, and they start tomorrow. Let’s tackle them a week at a time, and once you’re done reading these and getting your mind right, go join the bowl pick ’em.

Gildan New Mexico Bowl (1 p.m. ESPN)
Washington State vs. Colorado State – As I’ve always said, when Auburn beats a team, I became a semi-fan of them for the rest of the season. In most cases. Therefore, I’d like Washington State to win, and given the that they are playing Colorado State, they should.

Royal Purple Las Vegas Bowl (2:30 p.m. ABC)
Fresno State vs. USC – USC did not retain Ed Orgeron. He was mad. I’m sure the players were mad as well. Now they are split up and as lost. Fresno State fed on a bad schedule all year and then got beat by San Jose State late in the season to kill their BCS chances. USC should win, but without the guy that turned their season around after Kiffin is fired, I can see Fresno winning. Yep, they will.

Famous Idaho Potato Bowl (4:30 p.m. ESPN)
Buffalo vs. San Diego State – Remember when Buffalo was nothing but a nuisance to a team’s strength of schedule? Remember when people wanted to hire Turner Gill? They’re pretty good now apparently. Apparently. You think I keep up with Buffalo football?

R+L Carriers New Orleans Bowl (8 p.m. ESPN)
Tulane vs. UL-Lafayette – Tulane plays their home games in the Superdome. Lafayette, LA is just over 100 miles from the Superdome. This bowl is being playing the Superdome. Some bowl trip. Home team wins.

Beef ‘O’ Brady’s Bowl (1 p.m. ESPN)
Ohio vs. East Carolina – The absolute most embarrassing bowl game name returns, and what a matchup! Ohio, the king of the matte MAC helmets, takes on the current home of Jeff Lebo. Pat Dye once coached the Pirates as well. That’s just too many Auburn connections.

Sheraton Hawaii Bowl (7 p.m. ESPN)
Boise State vs. Oregon State – Hey, finally something I might watch. Boise’s final game with Chris Petersen versus the school with my favorite color scheme (besides Auburn’s). It’s cold in Idaho and Oregon right now. Hawaii is not ready for the amount of white thigh meat it’s about to see. Boise has to win in their coach’s sendoff, right? I don’t think so.

Now that I’ve picked the bowls, you should go join the bowl pick’em. Just make sure you have them in prior to each game, but go ahead and do them all so you don’t have to worry about it. There’s prizes and stuff.

Chiz, Cam, and Nick at the NFL Draft

Week 11 Predictions: Wrapping It Up

If Chuckie Keeton was healthy at Utah State they might win. They also have a fair defense. But NIU has been on a roll this season.

Slight correction, Gill wasn’t fired from Buffalo. He was fired from Kansas. He’s the one who brought Buffalo up from the dregs(relatively). He did a good job there. Maybe he should have stayed.