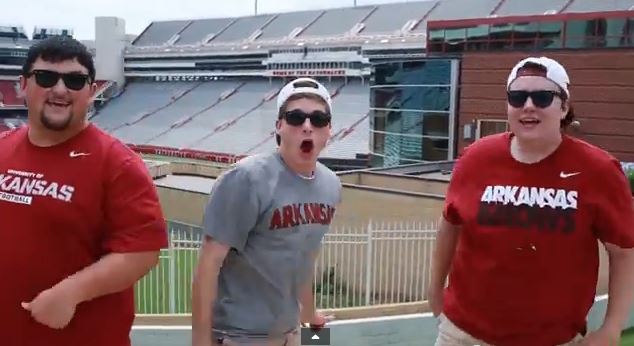 For fun each week, I search the YouTube for videos from the fanbase of Auburn’s opponent that week. There are the usual dudes sitting in front of their webcam talking about the upcoming game, and sometimes a little kid singing his team’s fight song. However, when it comes to Arkansas fans, it’s totally different. Almost all involve music and all apparently have no shame.

We were all introduced to LIZHONEY2U last season, the Hawg fan with a decent church singing voice, a Hawg hat, and taped up nose like a razorback. It had to be fake, right? She had to be joking. Nope. Here is the original video she posted following a loss to Alabama. She is serious and has since released many others videos.

Then there’s Wesley Wells, who seems like a really sweet guy with good intentions, but again apparently has no shame at all. You couldn’t even play a karaoke track in the background? You had to get your brother Henley to mimic the guitar between your lines? Come on, AND PICK A KEY, AMIRITE?!

Lastly, but certain not the end of the greatness on YouTube, we have the signing trio Triple Threat, an apparent huge draw in Fayetteville with their three part harmonies and connections to former American Idol Kris Allen. Like all other Razorbacks, they have taken a real song and changed the lyrics. This new Razorback anthem is called “Never Yield.” Don’t get lost in the decent video and audio production. This is basically a boy band praising Bret Bielema and Arkansas football. Think about it.

Update: One day after originally posting this, Arkansas fans delivered again. 103.7 the Buzz has posted a music video today that includes all the staples of an Arkansas fan video: rewording a real song, making it terrible, and having no shame while doing it. This one goes a step further using Cracker Barrell as the setting, with a guy who apparently can’t actually do anything, proven by his fake strumming of the guitar and fake casting a fishing pole. Thank you, Arkansas.

Have you found any other gems? Leave a link in the comments.

I will say I liked the Georgia Joker video that came out awhile back. Even though it isn’t music it could be good to include it when we play UGA.

Obviously the last two videos were made before the season started

Just Biel with it, brah!

You think that guy caught any fish in that 3″ deep creek?

That is the same creek they fish for touchdowns in