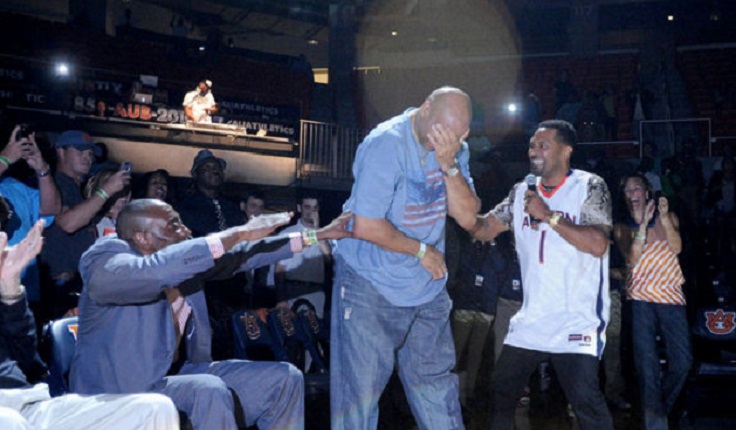 Who knew that the last two posts to WarBlogle.com would be dance related? Yesterday, it was Carl Lawson performing the Carl-ton (Hi Bunker!) after his sack of Bo Wallace. Today, I finally give you the video I promised last Friday from Auburn basketball’s Jungle Jam. But first, let me talk about the event for a sec.

The crowd was poor, but Jungle Jam was very live (that means loud and electric). Mike Epps was funny and kept the crowd going. Ludacris did 4 sets of 2 songs each spread out throughout the event (to keep people from leaving), and he did all the songs this 31-year-old white guy knew. The 3-point contest was okay. Transfer KT Harrell is awesome and might be the best guy on the team already. Dion Wade can shoot, too.

One thing I did notice was how much fun this team had together. The trip to the Bahamas over the summer was solely for teambuilding and it appears it worked. Nothing showed this more than during one of the breaks when Mike Epps got the team, Coach Barbee, and even Charles Barkley to show off their moves. It was probably the best part of the night.

Provided Jungle Jam happens next year, and provided the same level of talent shows up, every Auburn fan should go. It felt like a big basketball school event. It felt like something you might see at Kentucky. It was an attempt to get Auburn basketball back to an exciting level. Now let’s see if it happens on the court.

Highlights of Auburn’s 35-21 Loss to LSU

Toomer’s Talk on ESPN’s Outside the Lines

I always feel like I’m the only one excited about basketball season. Barbee seems genuinely confident this is a different and improved squad. Wouldn’t it be refreshing if this team was on the bubble near the end of the season? They don’t even need to make the big dance, just be in the conversation. I remember how fun it was when the last team made a run to the sweet 16. Anyway, WDE and beat the catamounts.