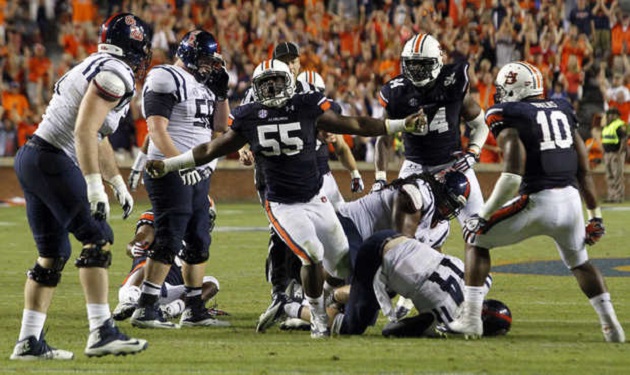 Remember the Lutzie? That was fun, but since Lutzenkirchen graduated, Auburn has been searching for their next Lord of the Dance. Following his game-sealing sack of Bo Wallace, freshman defensive end Carl Lawson has thrown his name in the hat. Good thing he has a few more years to perfect it. This may not fly in the locker room.

I don’t remember Tom Jones’s “It’s Not Unusual” coming in over the loudspeaker, but I was probably celebrating too hard. Carlton Banks would be proud.

I’m just gonna throw it out there that the Lutzie occurred the last time Auburn was generally good at football. Auburn appears to be generally good in football this year. Is there a connection with dancing and Auburn’s success? We’ll have to wait a few more games to determine that.

I love you, blogle