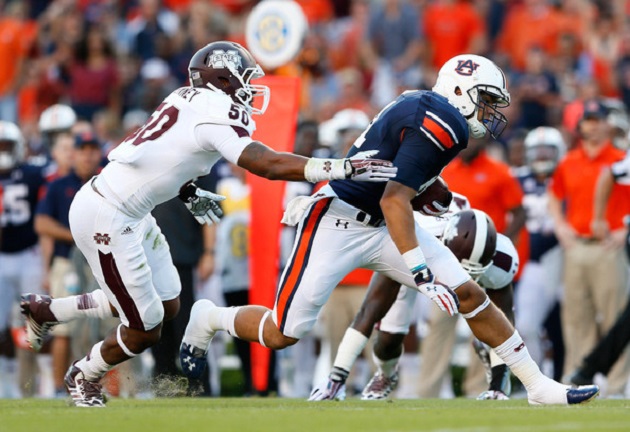 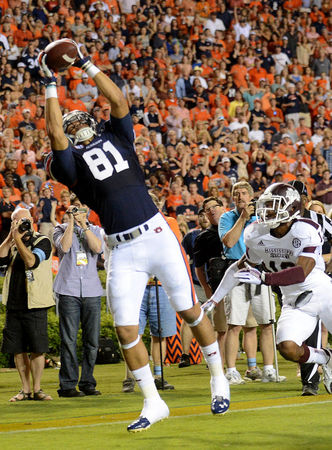 I never doubted them for a minute. Uh huh. Sure. Alright, probably just for a second, especially when Malzhan decided to punt just before what turned out to be Mississippi State’s 7th and final 3-and-out of the 2nd half. One of the more aggravating offensive performances of the season ended in arguably the best drive of the season, and that’s really all that matters… at least for this game.

It would not have happened without yet another shutdown performance by the defense in the 2nd half. We may have another Ted Roof on our hands with Ellis Johnson, folks. No, no, no, wait. Just listen. Ted Roof’s defenses, for all their faults and tons of 1st half yards and points, were the masters of 2nd half adjustments. This defense does just that.

In three games, the Auburn defense has given up 37 1st half points, 16 points in the 3rd quarter, and none in the 4th. That’s Roofian in every sense of the word. Well, true Roofian would be 100 combined 1st half points, but you get the point.

The exciting thing about those defensive numbers is that they’ve been able to do it without key members of the defense in every game. Dee Ford, Jeffrey Whitaker, and Justin Garrett were out the 1st two games, while Chris Davis was out against Mississippi State. Ford and Garrett returned this week and you could tell a difference, especially in the 2nd half. When Davis returns, Auburn will be as close to full strength at defense as they’ve been all year. They’ll just be waiting on Whitaker and Jonathan Jones at that point.

On the other side of the field, the Mississippi State defense was hellbent on doing one thing: stopping the run and making Nick Marshall’s arm beat them. Well, it might not have looked too great watching it the first time through, but his performance throwing the ball was his best yet by far. Taking up for the running game, which amassed over 300 yards on the ground just last week, Marshall used his arm to gain over 300 yards in their stead.

It does worry me that he seems to just drop the ball after he keeps a zone read every one once in a while, or that he had multiple batted balls against State, but when one of those turns into a touchdown and the other turns into a 37 yard self pass/catch, I’m just going to act like it’s on purpose.

He still has to understand that his arm is as strong as Jay Prosch’s calves when Sammie Coates is running wide open, but that last pass to Uzomah had the perfect touch. I know from experience that it’s tough to realize just how strong you are sometimes. He’ll get there.

Regardless, Malzahn put the game on his shoulders and he passed… literally. It was a show of confidence and Marshall used it to gain a little bit of his own. That final drive is a season-changing moment. It felt like 2010. I’m not saying we’re there yet, or ever will be this season, but that team grew up on the fly, and Nick Marshall took a big step towards growing up in just one 2 minute drive.

Note: Rod Bramblett’s call of the game-winning touchdown pass was one of his best. It sort of reminded me of Jim Fyffe’s call of Slack to Wasden against Florida in 1989. It was also a very similar situation, and while it was the opposite endzone, it was in the same corner. Here’s Rod’s call with video of the play:

You know why I love Gus Malzahn? Because he’s a mastermind of messing with other teams. He’s not running two point conversions just because he thinks he’ll need that extra point. He just wants the other team to have to think about it the rest of the game and each time they score. Mississippi State had to, and it ended up being the difference in having to score with a bomb on the final play of the game, or getting into field goal range. Traditionalists probably don’t like it, but there are no rules in football about when you can run a 2-point conversion. It’s there for a reason and Gus uses it how he wants.

Another example of his menacing wizardry would be his use of Jonathan Wallace and Kiehl Frazier as the wildcat in two games this season. It really made no sense to put them in there. Marshall wasn’t hurt or tired. Malzahn just wants to mess with the coach across the field and the coaches further down the schedule. From now on, they’ll have to wonder why he’s throwing guys on the field, who are perfectly capable of gaining 5+ yards each time, when there seems to be no logic behind it. He’s setting something up. We’ll just have to wait and see what it is.

When you can seemingly play as rough as Auburn did on both sides of the ball for at least half of the game and still win, it shows who really deserves to win the game. As I said in my preview, Auburn should beat Mississippi State every year, and this game just proved it. Last year was a blip. This year was a true sign of this series.

So now big boy football begins. Auburn started as a two touchdown underdog to LSU. Nobody expects the good Tigers to win. Nobody really expected Auburn to be 3-0. We’ll see if the unexpected can keep happening.

Week 7 Predictions: The Spreads Are Low

I agree with your Ted Roof analogy. The coverage was way too soft the first half, especially against the pass. But eventually, the defense made critical stops when absolutely required, just like ole Ted used to do.

I know most people are upset about allowing those runs up the gut. And yes, it was not good. However, when the second half got underway, there were subtle changes. And by the middle of the third quarter on, the defense was not allowing ANYTHING, baby. That was monumental. Miss State could not get the wheels out of the mud fer nuthin.

And like you said, we were missing some starters which says a lot about the young guys on this team.