The reviews on the inaugural Tuesday Mailbag were all positive so let’s do this again. Of course, the week after saying I get enough emails now to facilitate such a post, the numbers were a little low. It’s amazing how the excitement/confidence level from the previous week’s football game affects the ‘Blogle communities’ participation. So let’s go Tigers, get things on track. I got a kid to feed.

The first email was actually sent weeks ago by Michael Ingram (@mringram), but I wanted to wait until SEC expansion actually happened before posting it. Now that it has happened, here’s a little work he did with Google Maps to show the distances to each team’s campus from Auburn. He even threw a few other schools that have been mentioned just for fun. I’ve added the map I made from my expansion post from a while back for you geography nerds. 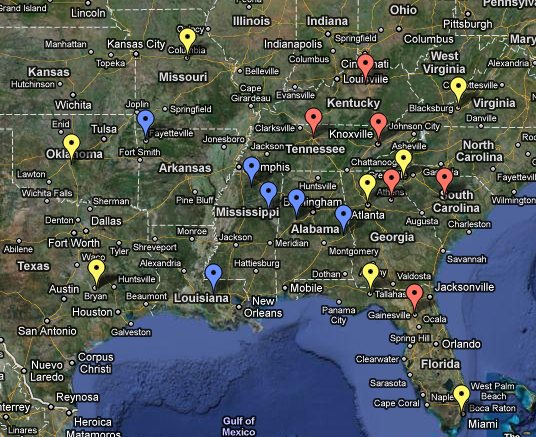 As you can easily see and probably knew already, Texas A&M is by far the farthest trip of any school currently in the SEC. You just thought Arkansas was far off. Yeah, add a hundred more miles and some weird traditions, and then take away female cheerleaders, and you’ll be in College Station, TX. Are we still sure we want to do this?

I would still take Florida State over any of the teams listed. They are close, they are getting good again, and they have history with Auburn. Make it happen, Slive.

This email came from a Twitter follower who asked to remain anonymous. You’ll see why.

Hey man, read your tweet about your embedded message. Thought you would get a kick out of this. We just finished a rehab project at a UA frat house. Put a new lockpad on the door, set the code to 2827 and threw away the instructions. Still not sure if they have figured it out, but would have loved to be a fly on the wall.

It’s people like you that make this world a better place to live. Every time that unwarranted cockiness raises it’s little head inside that frat house, it will be tempered by a reminder of that glorious day in November. I guess this situation may raise the question “How many Alabama frat guys does it take to change the password on a lockpad?” The answer: 13. One to hit it with a rock and twelve to talk about how the Bear would have done it.

Brett Miller kept it simple and wanted to talk Auburn football. I can do that.

The quick and easy answer about Reed being the next PPL is no. Reed has actually played more than one play. If you remember, PPL caught the opening kickoff of the 2008 season, got hurt, and as far as I remember, never touched the field again. Reed has been semi-productive already this season. He hasn’t done anything spectacular on punt returns, but based on what we’ve come to know with punt returners at Auburn, he’s doing a great job. Why? Zero fumbles.

Reed has primarily been the recipient of many a failed screen pass this season. It’s easy to look at him taking a 2-yard loss and pin the blame on him. That is unfair. The perimeter blocking that was so great least year has been severely lacking this year, and I think he’s done a fine job with what he’s had to deal with. Football is not a one man game. For him to get in the open field, he’ll need some help. Until that happens, he’s playing one on three or four every time.

As far as Trotter starting the rest of the season, I really don’t know. It’s obvious Malzahn wants Frazier out there more and more, but I don’t think that definitely means he wants him to be the starter. Frazier has been the only Wildcat that has worked, and with his passing threat, I see him lining up back there more and more. If Trotter doesn’t regress, or if Frazier doesn’t bust multiple long runs out of the Wildcat, I see no changes being made this season. This season.

John Stubbs doesn’t like Mississippi State, but who really does?

Why not kick out Miss. State, give them money, send them to Big XII, and save the 12-team conference. I don’t get it. They bring nothing to the table. We emerge stronger, wealthier. The SEC teams should all pitch in $5 million each and give Mississippi State a $60 million parting gift. The Big XII would be happy to pick them up. Everybody wins!

While I somewhat agree with you on the point that they bring nothing to the table, I don’t think conference expansion really has anything to do with current on-field football success. If that were the case, there are at least three other teams that bring even less: Ole Miss, Kentucky, and Vanderbilt. However, Ole Miss is a traditional SEC team and isn’t going anywhere. I don’t see the SEC getting rid of Vandy anytime soon. We need their GPA bump. Kentucky will always welcome to help the league’s basketball credibility.

Your idea is great and all, but it will never happen. No team will ever willingly leave the SEC, and they will fight to keep their spot to their death…even with a huge chunk of change thrown at them.

But wait, let’s be fair to the Bulldogs. They do have that cheese store on campus. That has to account for something.

C.A. Morrison, class of 1980, experienced one of my greatest fears. I would have handled it differently, but here’s his story.

Dear WarBlogler,
Have you ever woken on a crisp Fall morning with the birds chirping, the morning newspaper right where it’s supposed to be in the driveway and a luscious cup of coffee brewing in the coffeemaker and think to yourself, “Today is going to be a GREAT day!” That’s the feeling I had back in 2006 right before my son called from his dorm room at Birmingham-Southern and announced that he was giving up his full academic scholarship and transferring to the University of Alabama because of a girl.

This was the same child my husband and I had taken to Auburn for every game for the first 18 years of his life, who was raised “right,” and taught the Auburn Creed from pre-school to high school. And he was telling me that he wanted to go to the Dark Side?? I could not believe my Orange & Blue ears. And after face-to-face talks with every Auburn graduate in the family (too many to count…and none from the U of A, I might add), no one could talk sense into this kid and before I could say, “I believe in Auburn & love it,” there we were packing up his stuff and heading to Tuscaloosa.

But I had a plan. I said to myself, “If the University of Alabama is going to get my hard-earned cash, they are going to have to look at checks with the Eye of the Tiger on them.” So I ordered a stash of Tiger Eye checks and laughed myself silly. “Ha, ha! This is actually going to be fun,” I thought to myself. What I pictured in my head was writing those checks in the comfort of my home, at my desk with my bobble-head Aubie giving me comfort. What I didn’t imagine was what actually happened on the day we took my son to Registration.

Of course, there were lines. Lots and lots of lines. With each one ending in a person in a crimson shirt and a scripted “A” hat collecting checks for this, that and the other. “Oh my gosh,” I thought, “I’m going to have to write these checks IN FRONT OF AN ALABAMA FAN.” I was mortified, embarrassed and really wondering what prompted me to have such a terrible idea. But there was no way out of the situation, so I just held my head high and did what had to be done without saying a word.

Fast forward to a huge auditorium with about 500 prospective students and an administrative type dude at the podium giving instructions on what was going to happen next….and me and my son on the very back row. Before he dismissed the crimson mob into small groups, he said he had some housekeeping matters to attend to and then proceeded to call my son’s name to please come to the front. I looked at my son with panic and immediately asked him, “What the hell did you do?” So we get to the aisle and slowly make our way to the front of the room and I look to the stage where the administrative type dude is holding up one of my Tiger Eye checks I had written earlier in the day….holding it high over his head and saying into the microphone, “You Auburn fans. Not only did you write this check to the University of Alabama on an orange and blue check, but you forgot to sign it.”

By the way, that girl my son followed to Tuscaloosa? He married her and she was worth it.

While that last line is beautiful, I just don’t think it’s possible. One day you’ll see Mrs. Morrison. One day…

If you would like to be part of next week’s mailbag, send me an email.

Man Beaten for Yelling “War Eagle” in a Whataburger

Mr. Morrison, your anecdote qualifies as a real horror story. I am so sorry. You keep telling yourself how great your daughter-in-law is, and we’ll just nod and smile.

My best friend was forced to get her master’s degree at UAT. WE DON’T TALK ABOUT IT. Ever.

WarBlogle, and TheAuburnGirl: correct me if I’m wrong, but it’s MRS Morrison, considering she said “me and my husband.” Just anted to point that out in case y’all didn’t read very close enough to catch it.

Well, I thought so, but then, WarBlogle called her Mr. & I figured, well, okay…either way it is a tragic tale. I mean love, yeah, okay, but give up a full scholarship? when B’ham Southern can’t be but maybe 45 minute drive to UAT? I could understand if he was at UGA (shudder) or UFla (double shudder)–that would make more sense, but come on, Birmingham is straight shot highway to Tuscaloosa, unless something has changed in the 20 years since I was there last.

I think Auburn parents need to go a step further, as I did, when raising the babies. I told my twins they could go wherever they wanted but if they went to UGA (specifically, since we live in Atlanta) I would take them the first day and show up for graduation but nothing in between and I repeated it about 1000 times until they left for college. Tough love works. Alas, they didn’t choose Auburn, but not UGA nor UAT, either.