How I Remember It: Kirk Herbstreit called it a war. I called it a boring game with an exciting ending. I remember LSU kicking a first half field goal, Brandon Cox scoring on a quarterback sneak in the 3rd quarter, and the reversed pass interference call that completely made sense, but would infuriate me to this day if I were an LSU fan. The call was correct, but when’s the last time you saw a call reversed for a reason that made sense? 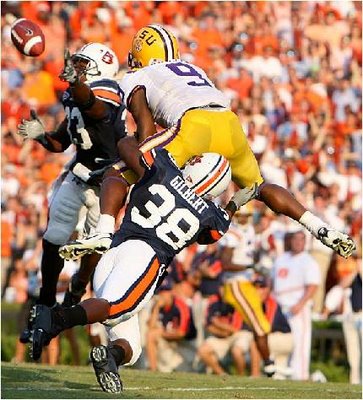 The Last Play (from the stands):

Highlights of Auburn’s 34-3 Win Over Arkansas

This was my first season as a student. I went home for this game (why not, I didn’t have tix) and watched it with my family. At the end, my mom, who never gets wound up for games, was dancing and pointing her finger at the tv and making a ruckus. It was great. :)

The player of the game was Auburn’s punter. He consistently kicked Auburn out of trouble and kept flipping the field on LSU even when they had pinned us deep. Tubs credited him with the win in the post-game.

It is amazing how you ignore the multiple rules violations the Fighting Tye Dyes got away with in this game, “The Robbery On The Plains”