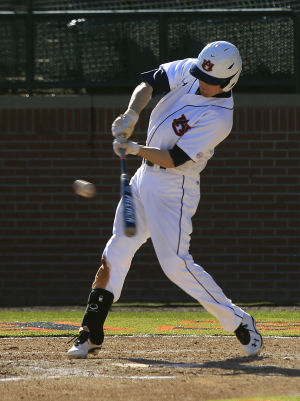 Last night, after 7 innings, Auburn trailed Jacksonville State 8-0. I was barely paying attention to the score on my phone while out to dinner. I paid less and less attention as the score got worse.

Then, in the 8th inning, someone said something to the effect of “oh, we at least scored.” Then I started paying attention.

What happened next was something of great beauty and slight irony. As you probably know by now, the Tigers put 12 runs on the board, all with less than two outs.

To top it off, Dan Glevenyak, who had zero homeruns on the season, hit not one but two 3-run homeruns. JSU used five pitchers and took 71 pitches to get Auburn out. 71 in one inning.

Not since the Mother’s Day Meltdown of 2011, when Auburn also had a 8-0 lead over Georgia, but eventually gave up 9 runs in the 9th inning to lose 14-11, have I seen anything like this comeback (also the same week as Mother’s Day). Yes it was just JSU, but they are a strong team and are projected to make the NCAA tournament.

Here’s the rundown of just the top half of the 8th inning:

Auburn needs to win one more game this season (regardless of what they do in the SEC Tournament) to have a winning record on the season. The past two years, Auburn has finished exactly .500 and one game short, causing them to be ineligible for the NCAA tournament. The Tigers will need to be a few games over .500, with a strong showing in the SEC Tournament, to get any further this year.

These are the types of games they lost in the past. It’s good to see them beat the teams they should when they are in a no-win situation like they usually are when playing a smaller mid-week opponent. They have Samford tonight and it will be the same situation. They have to beat the “little guys” if they want their games against SEC teams to mean anything.

Mr. Chizik (and his recycled shirt) Went to Turner Field