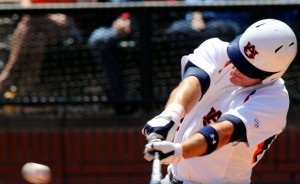 I’m sure by now you’ve heard about yesterday’s monumental collapse by Auburn’s baseball team as they attempted to sweep Georgia and move into a tie for 1st in the West with Alabama. A win would have setup a humongously fun series this weekend against the Tide. In short, the winner would lead the West going into the final weekend and hold the tiebreaker. Instead, we are looking at a humongously scary and must-win series to hold onto one of the last spots in the SEC tournament. For more on all the scenarios, go to Plainsman Parking Lot.

The collapse began with Auburn leading 11-5 in the 9th (they lead 8-0 after the 1st), and only needing three outs to complete the sweep (which I regrettably tweeted). Just look at how AuburnTigers.com described the top half of the inning as Georgia batted. It’s quite depressing, and was even worse to watch in person.

I’m normally not a glutton for punishment or reliving absolutely terrible moments in Auburn history, but this was too bad not to share.

For the record, I don’t want it to seem like I’m bashing the team or anything like that at all. They are all better than me in every aspect of baseball, unless you count my high school record of most times hitting the ball off the outfield wall without ever hitting one over.

Hopefully, this was just one of those very fluky, weird, hope-it-never-happens-again moments, and Auburn will shake it off, beat Samford (if you live around Birmingham you better be there) and Alabama State this week, and take out Alabama this weekend.

The “Bo, Barkley, and The Big Hurt” Trailer