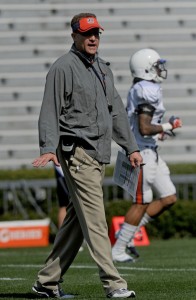 As you probably know, Gus Malzahn released the post-Spring depth chart for the 2013 season yesterday afternoon. There were a few surprises, but it was mostly what should be expected. I must remind those that are acting like this is what we’ll see on the field on August 31st, that a lot will happen before then, and Auburn will take in 20+ more players before then.

This chart should be used as nothing more than something to talk about as we approach the full and true offseason.

So that’s what I’ll do. Let’s have a few words about what Gus have given us now that his first Spring practice as Auburn’s head coach has ended.

Ah, don’t you just love a good “OR” on a depth chart. That right there should tell you how much we should put into this whole thing, but I guess I’ll go on. We knew this was coming. Neither separated himself from the other by A-Day, and considering Nick Marshall and Jeremy Johnson are coming in, it’s best to just wait and see what happens.

No real surprises here. I think we’ll see Tre and Cam most of the year, with Corey getting a few reps here and there. He’ll be used elsewhere as we’ll see a few spots below.

Jay Prosch is the ONLY senior listed on the offensive depth chart, and he was a transfer. Let that sink in.

Jaylon Denson got much praise throughout the Spring, so I’m not surprised to see him in the starting spot, but I didn’t expect to see Sammie in the backup. He seems to be the most physical receiver Auburn has right now. Maybe Jaylon is just that good and we haven’t seen it until now.

This should be know as the “McCalebb end-around” position. Both Quan and Corey are quick enough to run it. I think both will play and strive here.

This is where I realize that I don’t know, or ever will know, the intricacies of the Malzahn system. “Just another WR spot” is what I call this one, and this seems like a likely order here.

Brandon Fulse was the starter on A-Day and ran with the supposed first team through most of the Spring. That was a surprise, but now that makes me surprised that Uzomah is in the top spot, which wouldn’t have been a surprise through the Spring. Surprised?

The line is pretty much exactly like I thought it would be. I thought Danzey may take a starting spot due to his JUCO experience, but Kozan is apparently pretty good. I think this group could look a little different by the first snap.

Dee Ford is one of maybe two or three guys who have his spot locked down. Nothing against Sanders, he’s one of my favorite players, but Dee has it and should be poised to have a good senior year.

I kinda of feel like both of them should be starting, I really like how both play. We’ll see.

Whitaker is probably one of the more likable guys on the team. I need to see him become less nice and rip a few quarterbacks in two. If not, Bradley may take the spot before the season’s out.

I love Nosa. I really do. I just want to know what happened. He played in the BCS National Championship Game, then last year was 3rd-string, and now is 2nd behind Carter who just moved from DT. I mean, I want the best to play, and I don’t know why that’s not Nosa.

Is Kris Frost finally getting his shot, or is this just because Holland had to miss multiple Spring practices due to a senior-level class that only met at one time throughout the week? I know I’m ready to see Frost play, but this is slightly surprising given what was said about Holland during Spring.

Cassanova kind of became everybody’s favorite defensive player for a while last season, but I think he was still getting used to the college game. He definitely seemed to have tons of potential. Now we’ll probably get to see it come to fruition.

Garrett, from all that’s been said, might win the Heisman this year. No, but really, he seems to be a hidden gem that was completely missed last year. He apparently is perfect for Ellis Johnson’s “star” position, which has me excited.

Chris Davis is one of those guys that has his spot on lock, but he really needs to stay healthy for an entire season. Please?

I like Mincy, but I like Jones a lot, too. This is weird to have multiple DBs that appear capable to play back there. I’m fine with either one in this spot.

Holsey is going to be one of the better DBs Auburn has seen over the last few years. Write it down. Fisher, who is the only person on Auburn’s roster that had an interception last season, is a noble backup.

Demetruce McNeal missed the last five Spring practices. Nobody knows why. He tweeted that it wasn’t anything bad, but it’s weird that it was enough to keep him off the depth chart. I have a feeling he’ll be in this spot when all is said and done. But I am completely okay with Whitehead back there. Another weird feeling of having multiple able bodies.

Both are seniors. I surely hope there are good backups sitting over there somewhere.

As I said, this chart is merely something to talk about. It’s a starting point and probably a point of inspiration for some of the guys not at the top. It will look very different when Washington State comes to town.

To be honest, I’m perfectly fine with the defensive side of the ball. The offense has me a little shaky, but then again, we’re talking about Gus here. He’ll have it ready when it needs to be ready.

From the Other Sideline – Arkansas (Extra Edition)

From the Other Sideline (Summer Edition) – Alabama

That flanker position is the “Terrell Zachery, 2010 edition” position. Opposite side from the X and off the line. The TE is usually on his side, too, so outside runs typically go that direction, which means this flanker position gets the play-action bombs thrown his way.

in the A-day game