As you undoubtedly know by now, the point of these weekly posts is to give you a brief synopsis of Auburn’s history with that week’s opponent and also give you plenty of reason to get your hate started. Most say that the Deep South’s Oldest Rivalry is a friendly rivalry, a rivalry of brothers. That sentiment most likely comes from the fact that two of most iconic figures in both programs’ history actually attended the other school. UGA coach Vince Dooley played at Auburn, while Auburn coach Pat Dye played at Georgia. That’s where it ends for me. 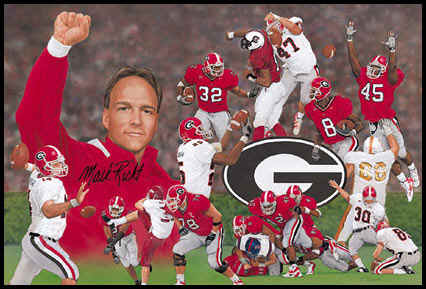 If there was no University of Alabama (man, can you imagine?), Georgia would top my hate list by a huge margin. I’ve said it once before, but their fans are just like Alabama fans in another state. Except in Georgia, they don’t really have another team to temper the flames. Georgia Tech is never really a threat to do anything to the Dawgs so basically the whole state is run amok with what only sixty or so percent of our state acts like.

Grown men bark and paint bulldogs on their heads, while the classy ones wear red pants. Red pants. They run on opposing team’s fields and steal their grass. They have full on choreographed team dances. And did you know they have bars? Lots of bars. Plus, and this is a big one, did you know R.E.M. came from there? Yeah, that band!! WOOOOOO!!!!! I feel like I’m losing my religion just thinking about the fun they have over in Athens.

But really, let’s think of reasons to hate their actual football team. Well, did you know that Georgia wins 10 games a lot? You may have heard. Still looking for that to actually turn into anything, though. And you want to talk about cocky, man are they cocky. About what? Yeah, I don’t know. I guess it all goes back to that only real team in the state thing. They need an Auburn.

Mark Richt is such a good guy, you know? It’s just hard not to pull for him. I mean, he’s so nice to his players. So nice that they can do whatever they want. Literally. You want an iPod? Take it. That guy doesn’t even update his. It was still on iOS 2 and he was listening to some old Soulja Boy. We’ve moved on from that, star player. Get his laptop, too. He ain’t going to class.

I do want to specifically bring up 2010, when most, if not all of their team ran on the field following a play that specifically targeted Nick Fairley in hopes that a pile would form allowing players to take shots at him. Let’s watch it. Let’s watch Georgia be Georgia.

I realize this is a big jumbled mess of negativity, but that’s what Georgia does to you. They give you the shakes, they take away all coherent thought, and they just confuse you. You wonder why they are so cocky. You wonder what they have to brag about, yet for those of us that live in Alabama, they are too far away verbally beatdown at the water cooler. IT’S JUST SO FRUSTRATING!!!!

A lot of Auburn’s players are from Georgia. I’ve actually seen a few of their fans brag about that. Ok, yippee. Guess what that means, though. It meant they wanted to get out of your state. Good job.

Now admittedly, Georgia is having the better season. It’s easy to when you play nobody. And it’s going to be a struggle for Auburn to get a win this weekend. However, I made the statement a month ago that Auburn would beat either Texas A&M or Georgia. Well one of those didn’t happen so the other has to happen.

It’s a night game in Jordan-Hare. It’s the 2nd biggest rivalry on the schedule. It’s a different game. If you pack the stadium, if you forget what you’ve seen this year, and just worry about beating Georgia, it can happen. But let’s be nice to them. I don’t think I can stand to see Aaron Murray cry again.

” If there was no University of Alabama (man, can you imagine? ”

Why, yes, I can, and do, frequently. I find I breathe easier if I just pretend Tuscaloosa is a bad dream (isn’t it?). I try not to acknowledge UAT until the week before we are actually playing the game. However, I do not live in Alabama (except for my Auburn years) nor was I reared in Alabama. The deep down loathing I feel for UAT rarely flares into the kind of constant, consuming, fiery hatred I have for UGA. I actually feel sorry for the UAT folks, most of whom had never set foot in Tuscaloosa until the Tide starting playing more than two games a year in Bryant-Denny (remember when Legion “neutral” Field in Birmingham was more like UAT’s home stadium?). Somehow, like LSU fans, I’ve always figured that UAT fans simply didn’t know better.

I spent the majority of my growing-up years in Atlanta, and so, my disgust at UGA is complete. Every day, all day, all year, never a day off. Revulsion. UGA considers itself the Harvard of the South, now, and boasts about how hard it is to get accepted there. Whatever. So, they should no better, then, right? Don’t be fooled that the majority of UGA fans are graduates. They are not. My own mother professes to be a fan, for no good reason that I can see, except she has lived in Atlanta for most of my life. (It is so embarrassing.) None of her daughters dirtied their feet in Athens, though my Auburn graduate sister was duped into marrying a UGA grad (happens in the best of families, doncha know?)

I hesitate to tell you that many a year I have illustrated my distaste of UGA by saying I don’t care if we lose every game as long as we beat Georgia. Humph. This season that statement is a little close for comfort, but no less true.

My best friend, an Auburn graduate, born and reared in Birmingham would disagree with me. She saves her passion for hating UAT. She often says if we beat Georgia, we lose to Bama and vice versa (championship years don’t count). I’ve never wanted to check the statistics to confirm her hypothesis, and frankly, on the Wednesday of Burn the Bulldogs Week, I don’t care if she is right, because I want to beat UGA, beat them, beat them, beat them. There is no future beyond Saturday night.

Can’t say it better having lived in metro-Atlanta for over 30 years. BEAT the UGAly Mutts….Warrrr Eagle!

You conveniently don’t mention why Fairley was targeted. It wouldn’t have anything to do with him trying to end Aaron Murray’s career would it?

I’m assuming you’re referring to the shin hit? The one where Fairley was taken out as he dove towards Murray leaving his helmet nowhere else to go?

Actually, I was thinking of this one: http://www.youtube.com/watch?v=9e3PHGyHk9k

The old head spear into the spinal cord. That’s Auburn class right there. And he’s continued to prove himself to be high quality material since leaving Auburn. Just Auburn being Auburn.

How are you guys going to spin this “we’re classy” schtick when you hire Petrino? Can’t wait to see that.

If blogle’s video doesn’t get you riled up then this classic will…WAR EAGLE!!!!!

Auburn is the school of choice for Georgians who can’t get into UGA. I’ve asked some Auburn grads what the charm of Auburn’s campus is, and I’ve never heard a coherent answer. Just some muttering about throwing toilet paper in trees. With Bama’s scenic campus and football pedigree, and Athens’ lauded music scene and reputation as as an ideal college town, I understand your inferiority complex. But someone please tell me: what’s the appeal of Auburn?

That’s funny, because Tuscaloosa is a dump. Auburn, on the other hand, frequently appears on “best college towns” lists. Remember, the only reason people can’t get in to UGA is because of the Hope Scholarship nonsense breaking the admissions system, not because it’s some great school.

Auburn’s campus is beautiful, its facilities are excellent, and I received a top of my field education there. I could on on for half an hour talking about the library system at Auburn alone.

You’re right, UGA is not a great school — it’s a decent state school. And you’re also right that the Hope scholarship has affected UGA admissions. It’s pushed their S.A.T. standards much higher, which has left mediocre suburban Atlanta students to look elsewhere to schools with lower standards, like Auburn.

But I’ve been to Auburn’s campus, and its definitely not special. I have no clue what the appeal is. Your grads are loyal, and for that I give Auburn credit. But why do they have to move back to Atlanta and pollute the scenery with that ugly burnt orange, and cheesy Tiger-eyes logo?

Thank you for the auspicious writeup. It in fact was a amusement account it.
Look advanced to more added agreeable from you! However,
how could we communicate?

Heya this is kinda of off topic but I was wondering if blogs use WYSIWYG editors or if you
have to manually code with HTML. I’m starting a blog soon but have no coding knowledge so I wanted to get advice from someone with experience. Any help would be greatly appreciated!

Pretty great post. I just stumbled upon your
weblog and wished to say that I have really enjoyed surfing around your weblog
posts. In any case I’ll be subscribing in your rss feed and I’m hoping you write once more soon!

I believe what you said made a bunch of sense. However, think on this, suppose you were
to create a killer headline? I mean, I don’t want to tell you how to run your website, but suppose you added something that makes people want more? I mean It’s Georgia Week…
– WarBlogle.com is a little boring. You should look at Yahoo’s home page and watch how they create news headlines to get viewers to click. You might add a video or a pic or two to grab readers interested about what you’ve written.
Just my opinion, it would make your website a little bit more interesting.

Havee you ever thought abouut adding a little bit more
than just yokur articles? I mean, what you say is valuable and all.
However think about if yoou added some great photos or vijdeo clips to give your posts more, “pop”!
Your content is excellent but withh pics annd videos, this site
could undeniably be one of the best in its field.

Good post! We will be linking to this great post on our site.
Keep up the great writing.