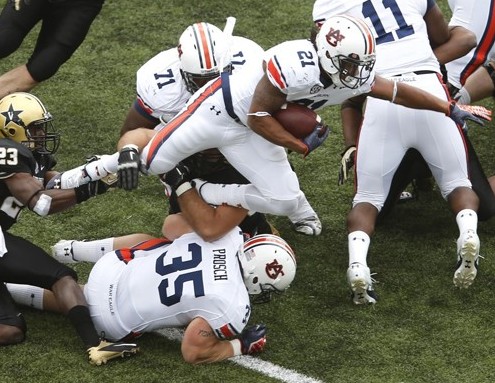 I don’t care how bad Auburn has played. I don’t care if Vanderbilt is having their best season in history. Auburn should never, ever lose to the Commodores in football. Therefore, when it does happen, you know something is wrong in the universe.

A fanbase, a school, a team that shows the lack of enthusiasm that I saw in Nashville this past Saturday does not deserve to win anything. I know Auburn travels well, but when the fanbase of a 1-5 team takes over your stadium and is louder than you throughout the entire game, you do not deserve to win anything. You really shouldn’t even be allowed to be in the SEC, but we need your grades so I know you’ll always have a spot.

Alright, on to Auburn, who allowed the most undeserving team in the SEC to beat them…

Once again, the problems all, 150%, completely, and utterly go back to play-calling. I don’t know if Chizik is handcuffing or if Loeffler has full control, but whatever it is lacks flow. Have I said this before? I think I have.

All Auburn had to do was run the ball up the middle. Tre Mason has been one bright spot on the team, and he continues to show it every week. I know I’m beating a dead horse by saying this, but apparently it’s not getting through. Multiple times on Saturday, Tre would have a big run, sometimes 15, 20, 30 yards a pop, and what does whoever is calling plays do? They put in Wallace for an obvious Wildcat, or they do some speed sweep on the very next play. For the record, I’m fine with Wallace playing more, but when you’re getting in a groove running the ball, don’t break it up.

Quit trying to run what you think is balanced. Quit trying to be cute. Run the ball up the middle with Tre Mason (and Prosch blocking) until you score a few touchdowns, get the opponent on their heels, and then you can play around and find out what else might work.

At this point, everybody in the world knows what is going to be called. For example: if Jaylon Denson goes in motion, the ball will be run to the opposite side from where he ultimately sets up. It happened at least five times Saturday. Go look it up, watch the game.

I’ll be honest with you folks, up until a few weeks ago, I was never completely sold on Tre being the every down guy who could be the dude to get Auburn some wins. I think it all had to do with me putting too much stock in his 3-star recruiting ranking, but that feeling is gone now. His ability to turn nothing into something last Saturday showed me that he can and should be great when all is said and done.

You know how many carries he’s had in the 4th quarter this season? He’s averaging two. Two carries per 4th quarter. That is not correctly assessing game time talent. Run him ragged. He said yesterday that he wants it.

As I’ve said before, I’m not the “Fire Whoever/Whomever” type, but all I know is that Loeffler is the offensive coordinator and the offense is the sole reason Auburn is losing games this year.

As a whole, the defense and their progression throughout the season is fine. Sure there were come frustrating missed tackles Saturday that could have allowed some dude from Vandy to literally moonwalk into the endzone, but when you continue to carry the entire team, things are going to eventually break for a drive or two.

Cassanova McKinzy should be everybody’s new favorite player. Finally given a shot to play most of the game, Mr. Chick-Fil-A himself took over. He had something like 13 tackles, a fumble recovery, and was responsible for a big 4th down stop that gave the offense a chance to go win it in the end. That obviously didn’t happen, but Cass did his part.

At this point, we know the season is lost. That doesn’t mean we stop cheering for or supporting the team. Watch each game, just as excited as if Auburn was undefeated, and hope for a win. If they get it, great. Celebrate for a day or two, punch a Bama fan, or however you like to do it, then just move on and hope we win the next one. If not, well it’s just another loss. It can’t get much worse.

As usual, I agree with part of what you say. I do agree that you have to take more advantage of Tre Mason’s talents, and yes you can’t be too predictable nor try to
mix things up just for the sake of doing so. But I do not agree with just running
up the middle with Tre time after time. First, because that gets too predictable, and
second what I saw on Saturday makes me think we can’t win ballgames with that “run, run, run” mentality. I just don’t think we have the O-Line to do that as effectively as need be. When AU went up 10-7 we did it with an awesome play action pass attack that move the ball, better than most drives I have seen this year. I was like, “why not do that more!!!” Of course that is just frustration and wanting to see more success with a talented group of guys whom I think are not directed well or are just “not there” yet.

Well said. I wish it were as simple as giving the ball to Tre. But I think Blogle’s point of running Tre directly behind Prosch until it hurts is good. With that said, we have seen the defense flood the hole and see Tre instinctively cut away with mixed results. We have been very predictable on first downs. I would like to see some short passes to pick up 5 with a quick release to avoid sacks and take a little heat off of a young o-line. Moseley has that in the tool box. Let’s be honest. “Loeffense”
is no match for what we had with Malzahn.

Forgot to add, that I do agree whole-heartedly with your analysis of Vandy though. And the title is completely accurate!

Good review — I agree with everything, word for word, particularly with the play calling. We seem to run five or six plays out there (at least Wallace was allowed to throw the ball, for once).

1) Do we have any mid-range passing game whatsoever? I would love to see us attempt 15-20 yard passes. It’s either quick screens, very short curl routes, or the deep ball prayer. Nothing in-between.

2) We can’t run because we can’t pass. I can’t emphasize this point enough. Tre Mason is a GREAT running back and we could have a solid running attack, but since we can’t pass the ball, Vandy and everyone else is stacking 8 or 9 guys up on the line to stop the run.

3) How is Loeffler still our OC? What will it take to have him go? The experiment failed, and failed miserably.

4) The ONLY thing I disagree with is that Vandy didn’t deserve to win because of not enough fanbase/team passion. That team I saw was absolutely fired up to play (and defeat) Auburn and it showed. Great enthusiasm by them. James Franklin has been a great coach and motivates his players well.

I’ll sum up my entire argument for a coaching change in one sentence:

Every knock on Vandy should be followed by, “And yet, we now have an all-time losing record against them.” I find your hatred of a team you have no business actively hating a mark of how bad Auburn is right now.

Don’t let the branches hit you too hard on your fall to the bottom, fellas. Hope you can turn it around in 5-10 years when we play again.

this is pretty funny.

Since you think the play calling is entirely to blame for Auburn’s 1-6 record this year, I’d like to remind you that there’s a coach on the market right now who has the reputation of being one of the best play callers in college football.

His name is Bobby Petrino.

Blogle nailed it….btw what is up w/ the Petrino obsession? There are more capable and less douchebag coaches out there who would represent AU on and off the field. Not attacking you but I’m tired of seeing his name on every AU fan site. Anyway beat A&M! War Eagle!

Is Mosley capable of attempting a pass beyond the line of scrimmage on third down???

There is no one close to Petrino in terms of a coaching resume who is both available and viable as a possible head coach.

In regards to Blogle’s assessment of the play calling and the whole offensive situation…pardon the pun….I hate to sound like a former Auburn Head Coach…BUT…I CONCUR!!!

This can be fixed.

The only coach doing a worse job than Loeffler is Pelton. There is no excuse for us to have that many 4 and 5 star players on the D line and to be getting dominated like that. Quentin Riggins was on the radio after the game saying the D ends are worn down from trying to go inside to help the D tackles. Now that McKinzey is a playing I do agree though with not starting him until now. The ULM game showed he was not quite ready. Next step up is Kris Frost for Evans. The secondary is playing much better and playing the ball for a change. It starts up front though. When Gabe Wright gets pushed from the 5 yard line into the end zone gettting in the way of the linebackers and safeties trying to make the tackle, we have a real problem. No technique whatsoever in letting the guy get up under his pads and it happens every week. Overall though, BVG is getting the defense going in the right direction.

On offense, there is no plan. Sammie Coates has shown the ability to get deep this year but we don’t throw it to him until the last play of the game? We are so predictable that teams are blitzing the cornerbacks into our run plays every time. Emory Blake is over there giving Moseley the hand signal that the blitz is coming with 5-7 seconds left on the play clock. How about a halfback pass just once to show some unpredictability?

I think we should stick with Chizik one more year. This team has been through a lot with 2 players killed and another shot. One’s mother dying an hour before kickoff and team manager dying the day of the LSU game. We are starting 12 Freshman, RS Freshman and Sophomores right now. Florida and Texas made the same changes and their first years were also horrible against much easier schedules. Pelton has to go though. Loeffler seems to have made great progress with Frazier, the game was just moving too fast for him this year. When his first read was open, he was usually spot with his accuracy. If it wasn’t, he would freeze up and lead to sacks after 6 seconds in the pocket. I think some spot time at the end of this year and another year of Spring Practice should get him over the hump.