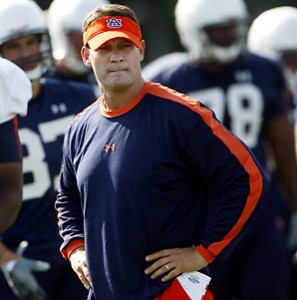 Friend of the Blogles, we’ll call her Lindsay, decided to send Gene an email earlier this week letting him know that she was still behind him and the team. Here is that email.

Please tell the players that though losing is never fun, WE BELIEVE IN THEM. At least I do. I believe in Auburn, I believe in your program, and I believe in each of those young men who do what it takes to earn the right to play football at Auburn. We are a family and family sticks together.

I was there Saturday. I was cheering. I will keep cheering. Hang in there and tell the team that the AU Family is behind them.

I just wanted to send you a quick email to thank you for taking the time to write and show your support. Auburn has the best fans in the country, and your email is even further confirmation of that. The coaches, players and I couldn’t be more appreciative of the members of the Auburn family who give us their unwavering support week after week, win or lose. Auburn has always been great, and continues to be – thanks in large part to diehard fans such as yourself who bleed orange and blue. We are working hard this week, and are looking forward to Saturday’s game. Thanks again.

It may be canned, but at least he took the time to copy and paste and hit ‘Send.’ Or maybe it is real and unique. What do you think?

Whether a canned reply or not, it is to his credit that Coach Chizik replied. Even if the message were written by a secretary, the fact that replying to fans is a priority speaks well of the coach and the athletic department.

Love this! In his first year as coach when we were going through a slump I sent a letter to him and his wife saying that the true fans were behind him, etc. A week later I had a hand written note from Mrs. Chizik in my mailbox. I think they truly are so appreciative of fan support as well as people taking the time to tell them.

Jennifer, I am sure if you still have the letter you can scan it (or take a picture) and send it to warblogle and he will add it to this page or something of the sort.

Another example, IMHO, of the greatness, as well as the humbleness of the man. I sure hope that AU doesn’t follow the past pattern of jumping the gun and firing him prematurely. There are often up and down seasons, games, times, etc, and we should be a little more long-suffering I think.

He is a better author than coach… Apparently.

Lindsay, you rock. Thanks for writing this letter and for the powerful example of what it means to be ALL IN. We just have to hang in there and build from this.