It’s hard to think about anything other than Auburn right now. It doesn’t matter who the opponent is during the next few weeks. The problem with Auburn right now is Auburn. However, sticking with the longstanding tradition (six weeks) of these “It’s <insert opponent here> Week…” posts, let’s talk a little history and a little hate to get you ready for the Black Rebel Bears. 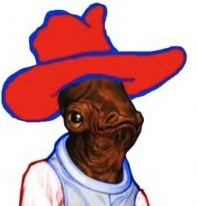 Auburn and Ole Miss have faced off 36 times since 1928. That’s a lot less than I thought it would be, but they only played twice in the 80’s and barely at all before then. Auburn owns a 27-9 advantage in the series, with a 17-4 record since the two teams started playing annually in 1990. The Tigers are also 12-2 when the games were played in Oxford. That’s quite strong.

Not to mention that those two losses came to 9-win teams against Auburn teams that ended up 5-7 (2008) and 5-5-1 (1992). The bottom line is, I guess, that the only times that Auburn lost to Ole Miss in the modern era is when Ole Miss was decidedly the better team and Auburn was having a bad year. Well, we kind of know that one of those has been true through five games this year.

Given Auburn’s pretty stellar overall record with the Rebel Black Land Sharks, it’s kind of hard to find anything to hate. I mean, Houston Nutt just wasn’t the same as he was at Arkansas when he planted the seed for the curse that we just saw this past weekend. David Cutcliffe, well, where is he now? Oh… wait, there was that one time. That time I threw up a little in Jordan-Hare and it wasn’t due to alcohol.

In 2003, Auburn started off 0-2 after being ranked preseason #1 by a few publications. They went on to turn the season around a little with five straight wins, including back-to-back top ten wins over Tennessee and Arkansas. By the 10th game of the season, Auburn was 6-3. That’s when Eli Manning and the #20 Ole Miss Rebels came to town.

The game was the back and forth the whole way, but Manning put together a drive near the end of the 4th quarter and took a 24-20 lead with around two minutes to go. Jason Campbell put together his own drive, with the help of Ben Obomanu on a 51-yard pass play, getting down to the Ole Miss 2-yard line. Then, this happened…

I jumped so hard and high, only to have that terrible feeling of doubt and neglect and remorse and hate take over, that it literally made me throw up a little. Ok, so a tiny bit of vomit came up and I had to spit, but it was still there.

You all know that the next play pretty much ended the same way, and Auburn lost to Ole Miss. This, and only this, is the worst Ole Miss memory I have, and is the reason I don’t take them as the cupcake that they usually are. I know they don’t have an Eli Manning anymore, but that memory is still burned into my head. It won’t go away.

Oh, and by the way, I’ve been through the Grove two or three times. I don’t get it. I’ve tried to look at it objectively, but it just looks like a bunch of tailgates you’re not invited to. There’s no room to just walk up and hang out. Therefore, it’s boring and overblown to me. Maybe you’re just a loser that nobody wants to hang out with, Blogler. Yeah, maybe. Thanks for the page hit.

Well, we don’t have much reason to dislike Ole Miss, but they have a very large, Tommy Tuberville-shaped reason to dislike Auburn. Remember, Tommy abruptly abandoned them and came to Auburn. It was quite the scandal way back then. Since Tommy has gone to Texas Tech gone now, maybe they don’t care.

No. It has to do with football. They were decent then. They’re not not now. They don’t care about football, they care about the party and the grove. Wearing bow ties, searsucker shorts, loafers and getting drunk.

Basically being the classy bunch they are. At least they’re usually not violent drunks.

And, Blogle, I too remember that game with contempt. I never understood why Obomanu had to always jump like that to catch the freakin’ ball. Oh well… c’est la vie

my first Auburn game that I can really remember was the first game that Tuberville was at Auburn and it was Ole Miss at Jordan-Hare…oh and my dad bought tickets in the parking lot so we ended up sitting in the Ole Miss section…besides the constant “Hottie Tottie Gosh-a-Mighty…” cheer, all I remember was the Ole Miss fans smuggling whiskey into the stadium in zip-loc bags, buying cokes at the concession stand, and making cocktails in the bleachers…they are pretty fun folks for the most part though…War Eagle!

I was in that section also. I, too, had bourbon at the game. I remember being so hoarse I couldn’t speak for two days. I’ve never heard Ole Miss fans scream so loudly. We wanted so badly to beat TeleTubby. I heard quite a few Ole Miss fans that day telling AU fans, “We like Auburn just fine; we just really want to kick Liarville’s ass.”

Glad you got to sit with us. I’d really enjoy going to another game at Auburn in the future.

not first game that Tuberville was at Auburn…first time Tuberville coached Auburn against Ole Miss….my mistake

But serioulsy… After last week it seems only divine intervention ( not ruling it out ) could get us an SEC road win.