On September 15, 2010, Gene Chizik spoke to the student body at an impromptu pep rally. It was Clemson week. That night, he asked the students to embody the two words that would become the motto, the mantra, and the attitude behind that national championship season. He asked them to be “ALL IN.”

Auburn went on to beat Clemson that weekend and every other team that season. As the wins racked up for Auburn, Clemson fans hung on to the idea that they had played the good Tigers as hard, if not harder than any other opponent. Add that to the fact that Auburn fans constantly remind them that their program was basically created as a carbon copy of Auburn (via Walter Riggs), and it pushed them to look for anything to latch onto in terms of besting Auburn. That, of course, meant complaining that Gene Chizik had stolen “ALL IN” from their coach, and ex-Alabama wide receiver, Dabo Swinney.

Stolen is such a harsh and incorrect word, but yes, Dabo did use “ALL IN” at Clemson before Chizik was even the coach at Auburn. Here’s the proof:

So yes, before Auburn put up billboards, before Chizik named his book, and before T-WILL wrote his song, Clemson was using “ALL IN.” No question.

Before Dabo created his foundation, before the city of Clemson opened a coffee shop, and before Clemson created a magnet, Auburn was using “ALL IN” … sorta.

In this photo of the 2005 Iron Bowl game day shirt from Tiger Rags, Aubie (or I’m not sure if that’s just a tiger) is holding four kings in a friendly game of poker with the Alabama elephant. The four signified the number of consecutive wins over Alabama once the Tigers ended up beating the Tide that year. 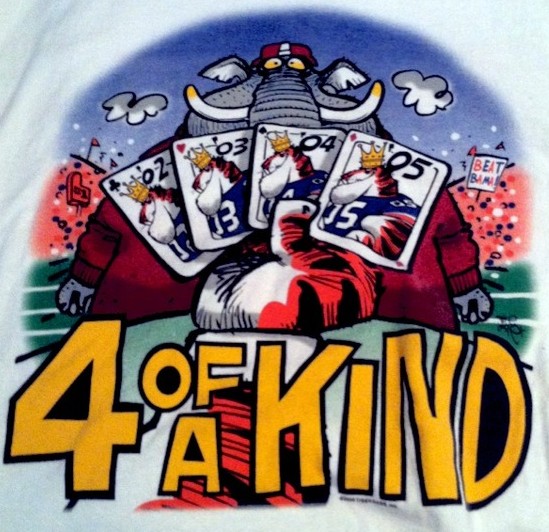 I’ve played a little bit of poker in my day, but I would by no means label myself an expert. However, I do know that not many hands will beat 4-of-a-kind. In fact, if I ever was dealt a hand of that stature, I would immediately go all in.

And would you look at that, that’s what the back of the game day shirt says: “TIGERS AULL IN!” Sure, there’s the slightly cheesy play on the AU, but it’s still there. Auburn was “ALL IN” back in 2005, while Dabo Swinney was a measly wide receivers coach. 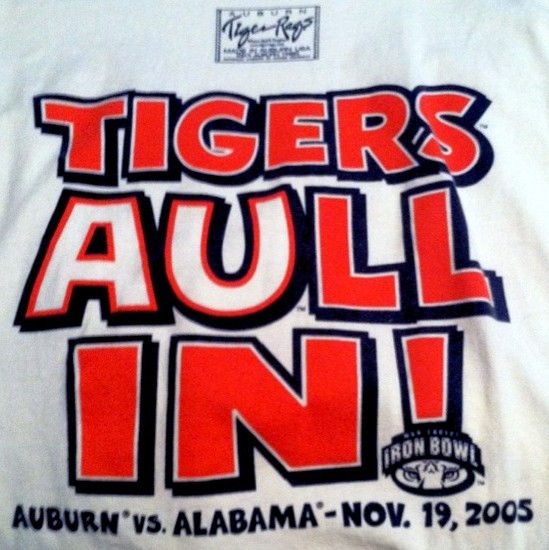 Sorry, Clemson. Maybe one original thought will come from your program one day. Oh wait, you did come up with “how to give up 70 points to a Big East team.” #clempson

Now as for Tennessee and UL-Monroe, they are just straight up copying.

Arguing about who came up with a two work slogan is petty. But, Adidas’s timing and placement of a barage of ads in the Champions Leage and EPL immediately following Auburn’s 2010 National Championship, that’s a different story. Half of the European soccer crowd has never heard of Auburn or Clemson.

The fact that they are Auburn’s carbon-copy yet have the AUdacity to put the little hook ‘C’ on the bottom of their paw logo to prevent copyright infringement means the Clemson is All In when it comes to irony.

What a piss poor attempt at trying to prove a point. face the facts that Clemson has demolished Aubarn the past few years. You sound like USuC fans comparing yourself to big brother. you even act like aubarn invented football. I guess you latch onto anything when you are your rivals bitch. bend over and take more bammer nutz in your dook chute. Go buy another sCam while your at it.Clemson bitch slapped Auburn and almost swept your sh!tty team . hey u did win one of the 3 in OT due to a missed FG. We didn’t leave it to the kicker the last 2 games when we absolutely steamrolled you. Auburn=the shame of the SEC. at least lsu put up a fight before we crushed them too.

Nope. Sorry boys, There’s ‘First’ and there’s ‘everybody that follows.’

Dabo was All In before you even thought about it.

Nice Clemson tiger paw you put down in the street at Toomer’s Corner. Why not a AU?