Sometime in the 1980’s, Patrick Fain Dye surrendered his green-and-blue golf pants to the depths of Lake Martin. In 2008, those pants were found. Now four years later, the sheer hilarity of this story lives on in a Twitter account and now in the winning caption of the Awesome Pat Dye Photo Caption Contest from a commenter named “Hamp.” If you are Hamp, expect an email from me soon. 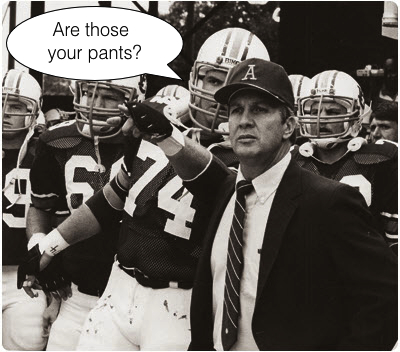 It was tough to pick a winner because almost all were hilarious. A few that stuck out for selfish reasons were…

Why does that guy over there have a warblogle symbol over his face?

There he is, the guy who stole Blogle’s laptop…

I really like this one, since I’m a Pat Dye locker room speech fiend, but I didn’t want anybody calling shenanigans if I let someone from the ‘Blogle family win.

Coach, Coach…see that…that’s those Angels we’ve been wrestling with…

If there was a 2nd place, this one would take it.

“There – right there, Coach. THAT’s the fan that actually went to to school there!”

As you’ll remember from the original post, I was pretty much guessing after a little bit of research that the player in Coach Dye’s ear was David Jordan. It was confirmed when David himself commented on the post.

Yes, that picture is of me before a ballgame. Only Coach Dye and I know the topic of that conversation. Some things are better left up to the imagination. I look forward to reading Auburn fans’ interpretations of what was said.

We have emailed back and forth and he believes this game was in Jordan-Hare in 1983.

Finally, it was also pretty cool to get a submission with a little twist from David’s wife.

Coach, Do you see that little girl with her Daddy in the end zone? She is only about 11 years old. Wouldn’t it be strange if she grew up and I married her in about 10 years? She just thinks she’s here to watch Randy Campbell and Greg Carr!

Thanks again to everyone who participated. This got a much bigger response than I expected. We’ll do it again soon.

ESPN Going All Out with “BCS Megacast”