In doing research for yesterday’s post about Under Armour’s new sideline shirts for Auburn, I found this completely perfect picture of Coach Pat Dye on EastAlabamaLiving.com. It comes complete with a slight scowl, touched with a little bit of concern. The players, in their huge 1980’s facemasks and blood-stained pants, are the perfect accent for an already beautiful portrait of Pat Dye-coached Auburn football. 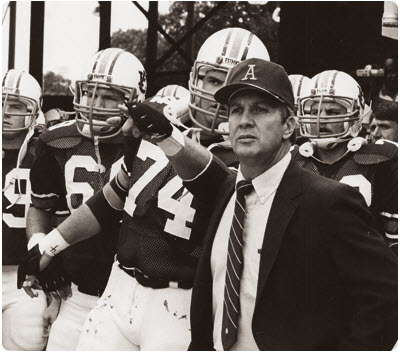 I don’t know what year this is, but I am positive it’s from the early 1980’s. From some good personal deductive reasoning, I think the guy in Coach Dye’s ear is David Jordan. I have no idea who Auburn was playing that day, but let’s just pretend it was Alabama.

Since we had so much fun with the Nova Dive Bomb Caption Contest back in 2010, I figured it would be fun to do one again. The rules are simple: in the comments section below, enter your name and email address (this is how I will contact the winner), and then enter the best line for whatever you think David Jordan is saying to Coach Dye. It doesn’t have to be funny. Just do whatever. My idea yesterday was “that’s the one that was talking ’bout yo mama, coach.” You can even put what Coach Dye is thinking if you want.

I’ll choose the winner sometime next week, contact them, and send them a WarBlogle.com t-shirt sometime in the next three years.

Update: David Jordan has posted in the comments section. He won’t tell us what he said that day, but he’s ready to see what you think he said.

Note: the title of this post is a little misleading. I mean that the photo is awesome. The caption contest could be awesome, too, if you make it that way.

The Eagle WILL Fly in EA Sports NCAA 12

Hey coach! Look! The Red Elephant Club is paying off the refs!

Coach, thats the guy I was telling you about, its his blood on my pants… told you I would protect this house!!! WDE

“Are those your pants?”

Why does that guy over there have a warblogle symbol over his face?

“See that kid over there? His name is Bo.”

Lo there, do I see my father
Lo there do I see my mother and my sisters and my brothers
Lo there I do see the line of my people back to the beginning
Lo they do call to me. They bid me to take my place before them
on your field at Jordan Hare where the brave shall live forever

“Check out the funbags on that hosehound.”

“That’s the one they call ‘The Bear’ coach… They said you’d never beat him and that they’d never come play in Auburn!”

Yes, that picture is of me before a ballgame. Only Coach Dye and I know the topic of that conversation. Some things are better left up to the imagination. I look forward to reading Auburn fans’ interpretations of what was said.

1) Thanks for posting right under my original post… Not that you meant to, but still cool.

2) I respect that. Would, or could, you reveal who you were playing against when the picture was taken?

I told you they weren’t gonna show, Coach, but if they did, you’d see red and white jerseys coming from over that hill.

crap…I meant Ray Perkins is on the left…

“Go past the cheerleaders, take a right into the tunnel, and you will see the bathrooms there on your left.”

I told them it would only take 60 minutes to beat bama. WDE

See the future, Coach Dye? You’re gonna make history in 1989 and it’s going to be one of the best things ever done for Auburn women and men!

Hamp wins, but here’s my (tongue in cheek) attempt anyway:

“Naw, coach. The guy in the yellow shirt. THAT’S the bag man.”

There he is, the guy who stole Blogle’s laptop….

“There. Right… THERE. That’s a Japanese maple, coach”.

“Coach, number 67 says he knows where you left your pants. What’s he talking about?”

Hey! There’s that Updike fellow making out with Finebaum and “legend”! Coach, that’s just not right!

Coach, Do you see that little girl with her Daddy in the end zone? She is only about 11 years old. Wouldn’t it be strange if she grew up and I married her in about 10 years? She just thinks she’s here to watch Randy Campbell and Greg Carr!

Do you see her now, Coach?…..the ‘Bama cheerleader on the far left way over there…….the really fat ugly one……she’s the one with no teeth.

Look at that, coach. Why do we get water breaks when Alabama gets beer breaks?

Dye: “Well, those slacks got a lot o’ splainin’ to do. Regardless who it is, those pants gonna see the bottom of a lake before I e’er wear them again.”

“There – right there, Coach. THAT’s the fan that actually went to to school there!”

“That’s him, coach. That’s the guy that made us wear orange last year….”

There coach, that is the guy who stole your beer.

“do you think that one’s mom let’s her date?”

“That’s the man who sold you that oversized cap, coach!”

I don’t have a funny comment but I think they are at the Tangerine Bowl in 1982. There are a couple of places where you could get the view in the picture of the stadium supports and the trees outside the stadium. Also the blue jerseys were what Auburn wore at that game and I can’t think of anywhere outside of Jordan Hare where we would have had those jerseys.

Thirsty coach? There’s a Coke vendor right over there.

Coach, Coach…see that…that’s those Angels we’ve been wrestling with….

THAT’S the guy, coach! He’s the one who said he’d poison our trees sooner or later.

Coach, that old guy leaning on the goalpost…is he still breathing?