In five days, Jordan-Hare Stadium will have some new flare outside its hallowed walls. The beautiful bust of ex-Auburn coach and Trophy-namer, John Heisman, as been in place since last Friday.

Today, the first statue of one of Auburn’s three Heisman winners was put in it’s permanent spot. It’s covered about the same as you’d cover some furniture you were moving in a U-Haul: a blanket with some duct tape.

Update: the statue has since been covered by a tarp. 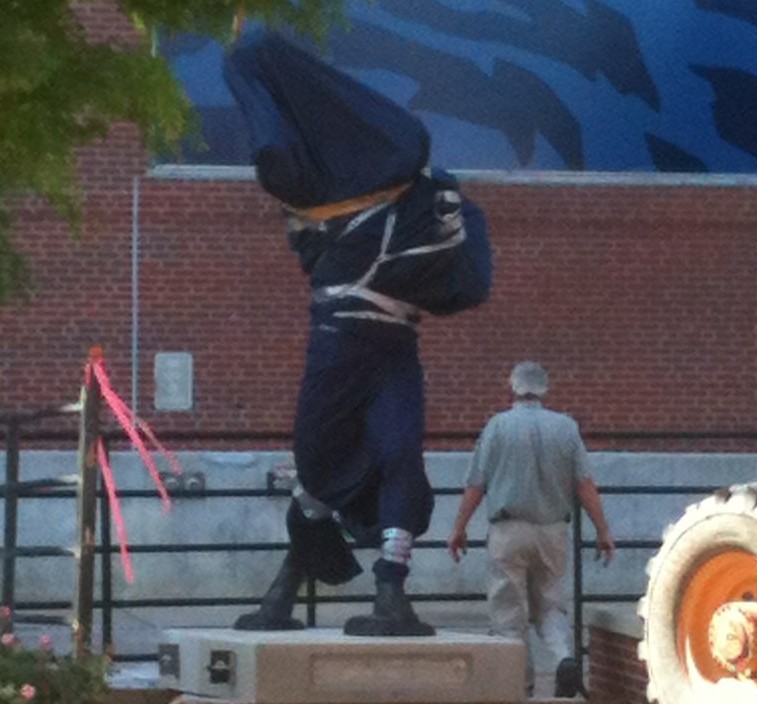 At first glance, it looks like someone doing a handstand, but after taking another look, it’s obviously someone throwing a ball. I guess that rules out Bo Jackson.

I think it’s Pat Sullivan, maybe in a pose similar to this. As great a passer as Cam turned out to be, I think his pose will feature one of his runs, like the one against LSU. It only makes sense since that run pretty much won him the Heisman.

I’ll post other pictures as you send them in, so do that. Send them in, just like @kookoo_katchu sent this one in.

I’m putting my vote down for this being Cam; check out the throwing motions:

Cam:
http://www.stateofthesport.com/wp-content/uploads/2011/03/CamNewton111.jpg
– Note how high the ball and his off hand are.

Pat:
http://www.helmethut.com/College/Auburn/ALXXAU6678Ac.jpg
– Note that the ball is further behind him, and his off hand is lower.

Just my guess, though: Guess we’ll find out next weekend. WDE.

I hope the one of Cam is him doing the “SuperCam” if only because it will drive the cousin-loving Bammers insane.

Should be Sullivan. He was the first…his statue should be the first. WDE!

I just went and looked at it, and I don’t think it’s tall enough to be Cam. My vote is Sullivan. Guess we will all find out on Saturday! War Eagle!!

It’s positioned on the right side, right in front of Sullivan’s picture on the stadium. I’m 100% on this being Sullivan.

I agree. Not Bo. But could go either way, Cam or Pat.

It is so exciting! I can’t wait to see them!

Why is Coach Dye there???