The Mailbag took a little break last week due to National Signing Day festivities, but it’s back this week with a little baseball talk, a little zombie talk, and a few other topics. I’ll keep the Mailbag going all throughout the year, so feel free to send any question you want answered at any time. 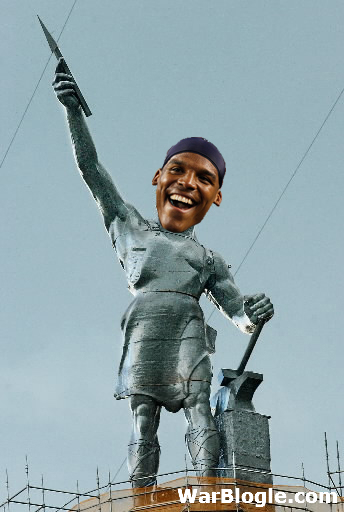 What’s the word on the unveiling of the Heisman Trophy winners’ statues? Can we expect that any time soon?

No idea. I’ve asked Auburn for a date and time, but haven’t gotten anything back. My guess would be A-Day since it would be a lot to ask of fans to come to Auburn without any sort of actual sporting event going on, and an actual football game day would be way too busy for a ceremony outside the stadium. Plus, the school did say the statues would be revealed during the 2011-2012 academic year, which only leaves a few more months. A-Day just makes sense.

Bo would just need to hop on a jet and fly down. Cam would just need to take a few hours from sculpting his abs. The only one of the three that might have a problem would be Pat Sullivan since he may be going through Spring practice at Samford at that time as well.

I assume we’ll hear something about it pretty soon, so I’ll keep you updated.

Auburn University students are currently in the midst of a humans versus zombies game. Zombies have won thus far this week, but the amount of humans they are taking is starting to slow. Think the still intelligent beings will win out or will the AU crazies overrun us all?

Well, the first thing I thought about it when I heard about this a few nights ago was the amount of study time being wasted. I can not believe college students would partake in such activities that would take away from their studies. Seriously though…

Are we sure this is actually a game and these “zombies” aren’t those that have been affected by the Crimson? Do the zombies seem to have forgotten to bathe? Can they spell? Do they have any teeth? I need need you to check into these and get back to me. We can not have anymore landmarks, especially the Auburn people, destroyed by those from the Northwest.

Beck has a cool name and wants to talk about baseball…

How excited are you for baseball? And will you being doing any kind of scouting report on other teams?

I am pumped for baseball. As some of you probably don’t know, it was the only sport that I played all through my adolescent years. I can relate to it, and I know more about it than any other sport. That being said, when it comes to covering college baseball, it’s just very hard. Most games aren’t on tv, and finding box scores for games involving other teams you want to scout is very tough.

However, there is one guy, a fellow O-town Killa, that does do all of this and he does it very well. His Twitter handle is @AUPPL and he runs Plainsman Parking Lot. He does for Auburn baseball what most every Auburn site does for football. He knows about every recruit, every current player, and every opponent. I’d love to do more baseball coverage, and I will blogle about it some, but if you want really in-depth stuff, go to his site. It’s really well done.

Shannon, a frequent bagger…ahem…Mailbagger, wants my advice on dealing with those that bought a Crimson shirt from a gas station.

How do you deal with Auburn haters in your office? I know you deal with a lot of Bammers on a daily basis at work. I thought I’d escaped that when I moved to Washington, DC, but sadly, I’m surrounded by co-workers who love to “Roll Tide” me in the hallway and write those terrible words on my desk. They steal my Auburn memorabilia and still talk about “Scam Newton.” Worst part? They didn’t even go to SEC schools!

None of this comes as a surprise to me. Evil is prevalent all over this world, and your situation is just another example of it.

Whenever you are confronted again, just simply ask them where they got their college education. When they say “nowhere” or somewhere other than Alabama, you tell them that they have zero right or place to talk to you as an actual graduate of the school you cheer for. You took the time and money to go to a college institution, so you are allowed to have pride in that institution.

Next, ask them why they don’t have pride in their institution. Why not brag about their own school, or I guess in some of their cases, their high school since it’s probably the last place they attended? This is a surefire way to get them to drink the shutup juice. There is no answer.

In terms of those that just hate Cam Newton, remind them that he did nothing wrong, Auburn did nothing wrong, and the NCAA has officially said so. If they hold onto that, then it’s just more proof of the sadness in their lives. They have no pride in what they own, so they try to tear down what they do not own.

The zombies were once humans, just ones that got turned. Most of them are Auburn students with the exception of some being from Southern Union. There are still a decent amount of Humans left with those left having formed squads to watch watch each others’ backs.