I guess everybody is already getting their Thanksgiving on because it was like pulling teeth to get you guys to send questions in this week. Oh well, it’s understandable. We have a big weekend on our hands. Get your rest in now. For those that did send in questions, thank you, and here you go…

William has heard some very troubling news, but is it true…. 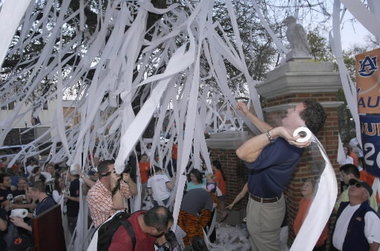 I have heard a dirty rumor that the fine fan base of The-Team-That-Shall-Not-Be-Named have been declaring that they are going to roll the trees at Toomer’s following their inevitable victory on the “Road to #14.” Two questions:

1. Are they serious? That would be the single dumbest thing they could do, and that’s saying a lot.

They are not serious. This rumor comes from this blog and is a joke. In no way would the city of Auburn give fans of another school permission to roll Toomer’s corner. This would be a huge security risk for something that would be completely unnecessary. This post was done purely to get a rise out of Auburn fans. Don’t give the author the satisfaction he craves.

Since the Iron Bowl was moved to Auburn every other year, Alabama fans have claimed they would roll the trees when they won. Those two other times it never happened, so I assume they would never try. But then again, I never thought anybody would poison the trees, either.

2. How’s that make you feel? Makes me feel like punting puppies, and I’m a fan of dogs. I say we tell Takeo Spikes and let him guard the trees after the game.

If they did it, I think it’s grounds for a beatdown. Not because I really care that they are rolling the trees, but because anyone that does this sort of thing is the type of person that just needs to get their butt whooped. I’m not saying poison them or leave them for dead, but a good pop or two wouldn’t be so bad, would it?

But seriously, if I’m not mistaken, rolling the trees when there hasn’t been an Auburn victory is against the law, as is rolling any tree outside of a school tradition. Whether it’s peaceful assembly or not, it doesn’t matter. They wouldn’t be allowed to do it.

John asks a question that I was going to tweet out earlier this week but just plum forgot.

What will the pre-game songs be at Jordan-Hare this week? Is there a song that speaks to the crying UAT frat boy?

I know Auburn would never stoop to the level of a “rogue student worker” or whatever Alabama called him, but it is fun to think about songs that Auburn could play when the Crimson Tide came out on the field. You know, just to return the favor.

Here’s a few I came up with:

Feel free to post your ideas in the comments section.

Well look at this… Cole Bennett, who scored a touchdown in the 2005 Iron Bowl wants to take part in the mailbag this week. I’m honored. A guy who will forever be known in Iron Bowl lore wants to ask ME something? I can’t wait to see what he has for me.

Evil Jedi or light side Sith?

Ummm…ok… I do actually like some of the Star Wars movies, but I had no idea there was an evil Jedi or light side Sith. Are you just messing with me? I thought it was plain and simple: the Jedis were good and the Sith were bad. I know Annakin was a Jedi that joined the Sith, but does that make him an evil Jedi that just so happened to be with the Sith? And I really see no way a light side Sith could exist. I have a feeling you’re just messing with me. War Eagle Anyway…

Bowl Games. Where do you think we’ll be? I know it’s pretty dependent on if we beat the #2 out of Bama this week, but at this point, where would you project us going?

If (when) Auburn beats Alabama, I think the Cotton Bowl would be a good possibility. Regardless of what happens this Saturday, though, I think Chik-Fil-A is almost a lock if they are given the chance to choose the Tigers. I don’t know anything more than you do, but it seems like they have been hanging around Auburn more than other bowls.

The Gator Bowl president said last week that if Auburn and South Carolina are taken, they will take Florida. That basically means that if Auburn is available, they would take them. The Outback usually takes an East team, but they surprised us all in 2009 in selecting the Tigers, so maybe they would do it again.

So it’s either going to be the Chik-Fil-A, Gator, Outback, or maybe the Cotton Bowl. I think.

Robert wants to talk about Clemson and possible bowl games…

What do you think about the possibility of Clemson playing Auburn three time in a year? The loss earlier this year, potentially in the Chik-Fil-A Bowl, and then the opening game of next year?

I hate it. I don’t even really like playing Clemson to begin with, and no it has nothing to do with the game this season. I just think they are boring. There’s really no advantage to playing them. If you beat them, nobody cares because they are perennial mid-level ACC team, if you lose to them, well you lose to them. It’s almost like playing a smaller in-state team that could maybe, once-in-a-while, slip up and beat you. It adds nothing to your resume and could take tons away.

As far as playing them three times, that’s just stupid. I was pretty irked when they announced Auburn would be playing them in the opening game next season. We finally get one of the prime time opening weekend games and we have to play Clemson again? That’s just, like I said earlier, very boring. There’s no way they put us in the Chik-Fil-A Bowl against Clemson considering we’re already playing them in the Chik-Fil-A Kickoff Classic next year, is there? Is there?

Darren gets, uh, really advanced and hypothetical with some expansion talk…

What would you say if Auburn and Lee County moved to Eastern time zone, Auburn joined UF and UGA in its “pod” when we go to 16 SEC teams. And scheduled one of GT, FSU, Clemson and Tulane every 4 years out of conference. What other team would you put in the SEC Refined Division? What two other teams would you accept to go to 16? I say ECU and Liberty of Virginia for the easy wins. Thoughts?

My thoughts are that my head hurts. My head hurts so bad… Eastern time zone? What?

Cousin Blogle gets a little head of himself…

What are you getting me for Christmas?

I do not entertain questions pertaining to Christmas until Thanksgiving is over. Ask me at the tailgate Saturday.

Will Ricardo Louis end up being the Cleveland Browns’ top receiver next season?

Would never happen, but no need for violence. Let those who want to get arrested do so. So Harvey Updyke.

I said “but seriously…”

Auburn needs to move to Eastern time zone! I’m from Valley (one of the two cities in Alabama that on eastern time). I hate that is gets dark at 5:00 now!

Some Chic fil a bowl person (maybe the commissioner) was in the suites during the homecoming game.. Just saying.

I think we should play,
” It’s my party and I can cry if I want to ” so fitting.

Bammer rolling the trees would be sacrilege. I refuse to click on the link above (shame on you for linking it for their benefit). As @Colecubelic stated earlier, it would be an ass-kicking for any Bammer to roll Toomer’s Corner.

[…] just makes my head hurt, so I'll just revert back to my answer to a similar question from last week. I don't even really like playing Clemson to begin with, and no it has nothing to do with the game […]