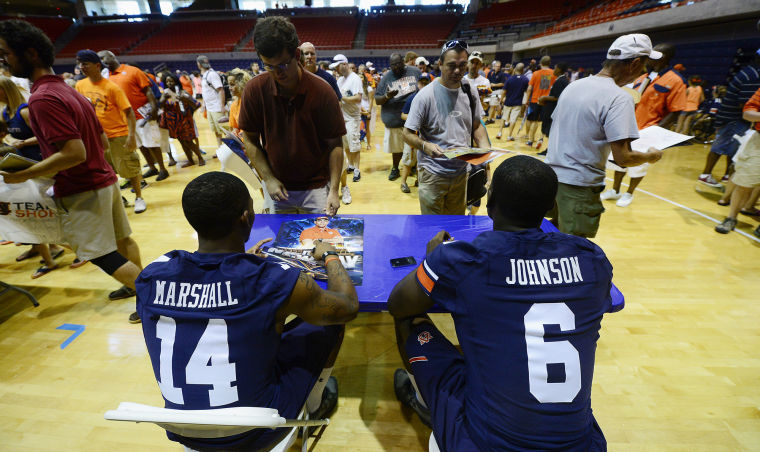 It’s tough to get excited about a Homecoming game, especially when the opponent is Western Carolina, who over the last two-and-a-half seasons have only racked up three wins. All three wins have come against D-II Mars Hill.

Last season, this would have been a welcome break on Auburn’s schedule with a good chance to watch Auburn do something good. This season, it’s already one of those games you don’t really want to watch because you know it’s going to be a blowout. But if rumors are true (and some are from what I’ve heard), there may be another little reason to want to pay close attention to the game this weekend.

Since Nick Marshall tweaked his knee a little in last week’s win over Ole Miss, and since the competition level is quite low this weekend, it makes sense to sit him out or let him play a series or two at most. There’s no reason to put him out there for an extended period of time when he could have a full two weeks to rest up for that little trip to Manziel Manor next weekend.

And if what I’ve heard is true, and I believe it is (and you should, too), Marshall will not play at all this weekend. But as far as what happens because of that, it’s going to be up for huge debate over the next few hours. Because, you see, Malzahn would not rule out the possibility of pulling Jeremy Johnson’s redshirt and letting him get significant snaps this week. It was rumored that they even may have let that happen last week. It just never did.

So why not just let Jonathan Wallace play against the Catamounts? He’s more than capable. Well, maybe the coaches think Jeremy Johnson is so good that they want to give him reps this week to get his feet wet, knowing that he will be able to contribute later in the season. Maybe they think he’ll even be able to start over Marshall.

I don’t see a reason to pull Marshall at this point, but if Johnson is already as good as everybody says he will be, then you have to go with the guy who’s going to win you games. At this point, though, I don’t see why that warrants pulling Marshall, who has won Auburn some games, and ruining a red shirt year just in hopes that Johnson can beat Georgia or Alabama.

Then again, he may be that good.

So let’s just say that Jeremy Johnson starts this weekend and he lights it up. He throws for 300, rushes for 100, and accounts for five touchdowns. Is that enough for people say it’s time to put him in a big game? I don’t think so. But some will.

I don’t know. I trust the coaches, but I would love to have Johnson for four full years after this one, and unless Marshall can’t go or they just needed a few more weeks to unlock Johnson’s inner-Cam, I’d rather we just wait. But if he’s that good, will he even be here for four full years?

So that’ll be the big story. Western Carolina won’t matter. It should be 21-0 at the end of the 1st quarter no matter who’s playing. All I want is for Auburn to win, but I don’t want a QB controversy to come out of it. If Johnson plays (for the record, I’m pretty sure he will), we may get just that.

I think JJ will be an amazing QB. Saying that I don’t thing he will stay 4yrs. I think he’s that talented. I’m looking forward to whatever happens.

What if Jeremy can run as shifty as Marshall, but throws more accurately? The coaches see these QBs everyday. Maybe they know what they’re doing.

Malzahn has repeatedly said, “We have to be more balanced on offense.”

You let the kid test drive the Ferrari in the Walmart parking lot. Then you turn him loose on the Autobahn.

Unless Marshall’s not really that hurt. But the offense needs to be more balanced, he said..