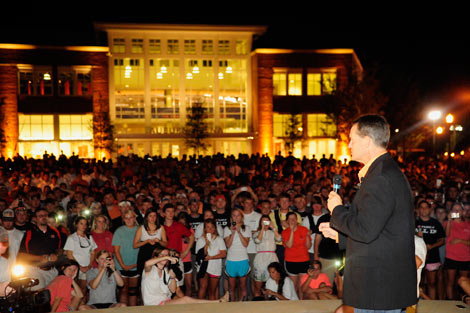 Tonight, Chizik sent an email to students (read it below) requesting the same from them this weekend as the Tigers take on Mississippi State. He also announced that there will be a similar pep rally this Thursday. I wonder if a new phrase will be coined or if the speech will be just as rousing. I especially love the part where he asks the students to stay “until the last second ticks off the clock.”

Last season, I asked you to be “All In” and you answered the challenge. You were “All In” all season long, and you made a huge difference at each and every game.

As you know, Southeastern Conference play starts this Saturday as we host the 20th-ranked Mississippi State Bulldogs for the annual “True Blue” game. The game is the first of what will be a really tough SEC schedule, and we need you to be “All In” once again.

The game kicks off at 11:21 a.m. CT, and the student section gates open two hours prior to kickoff. I know that we count on you to make Jordan-Hare Stadium the loudest stadium in the country no matter what time we play. We need every advantage we can get, and I can promise you that you make a huge difference. I also hope to see you at the pep rally Thursday at 8 pm. The pep rally will be at the Village Green in front of Auburn Arena.

So get there early. Wear blue. Be loud and stay loud from the moment our players come out for warm-ups until the last second ticks off the clock.

We have the best fans in the country, and you are without a doubt the best student section in America. Thanks again for your unbelievable support. I’ll see you at Jordan-Hare Stadium on Saturday.

Gene has spoken. Do as he says.

War Eagle Coach! We are ALL IN, True Blue, and we will be there until the last tick no matter what.

@MSUb-Multiply me by 80,000 and I’ll show you “weak”. We dun need no stinkin’ cow bells. Hope you can find your way to the barn without one.

Isn’t it funny, I keep getting family that is MSU fans telling me to get my shots. I don’t think these pups know what kind of cat is at Auburn. If I were them, I would be very leary coming in Jordan Hare raising all kinds of hell. Humility never hurt anyone. This arrogance is liable to get them a good butt whipping with a news paper and no telling how many scars from claws from these tigers.

Welcome to Auburn. And to Jordan Hare. Meet 87K of my family. We are ALL IN.

I’m all in coach!! I believe in Auburn and love it! MSU has the big head….I personally would bet big money on this game. WAR DAMN EAGLE!!!

Uh, oh: Ohio State, this year, is also All In. You’d think they’d have to be…. Look hard at the helmets.

It’s ok. They can borrow it for a while. They really need it bad.

If they’ve bought into Gene Chizik’s coaching philosophy to such a degree, would tattoo parlors be considered an ‘energy vampires’?

[…] nights ago, Gene Chizik sent an email to students asking them to be "All In" at this Saturday's game against Mississippi State. Last night, he spoke […]