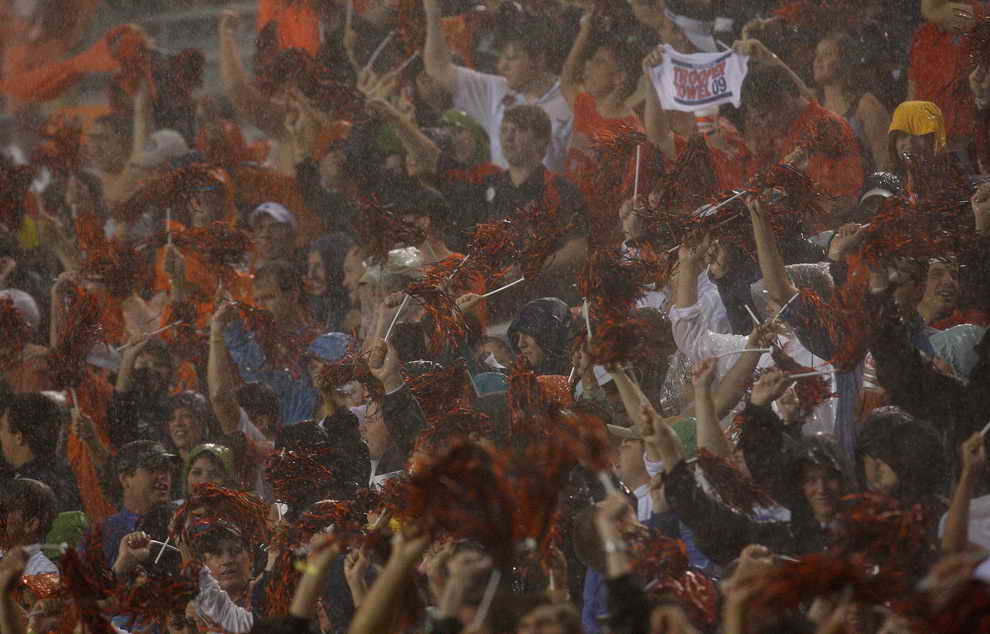 How I Remember It: Rain, rain, and more rain. As soon as I entered the stadium, the bottom fell out. That’s when things got really fun. Apparently, inside the stadium, they were sending all of the fans down to the concourse for concerns of lightning. However, all of the fans on the concourse were trying to make their way to their seats or hanging around until the rain stopped.

This resulted in 60K fans being crammed into the concourse, with half trying to make it down, and half that didn’t know they couldn’t go up trying to go up. It was really fun. I had the good fortune of being smashed up against a West Virginian, who’s hair was slicked back with what I hope was water. He kept telling his 12-year old son to spread his legs and get a good base.

Of course, there was the 15-year old girl that had to fake passing out just to get attention, and every once in a while you’d get the guy who was hellbent on getting his girlfriend to their seats, until he was stopped by the angry mob.

There were almost four fights, three deaths, and two births, and that was just in my little 20-foot area over a 45 minute span. So yeah, it was definitely way safer down in the Concourse O’ Hell. Next time, Auburn “staff” or whoever made the decision, I’ll take my chances in the lightning.

Now on to the game. It started out scary. West Virginia’s version of LSU’s Jamarcus Russell spun around eighty times and threw a long bomb early in the game to set up a touchdown. Then Noel Devine ran for like 85 yards on the next drive to put the ‘eers up 14-0.

However, the Auburn defense did their best impression of the 1994 Auburn vs. LSU defense, and intercepted West Virginia’s version of the Oakland Raiders’ Jamarcus Russell around fifty times, giving Mario Fannin a chance to show us what he was capable of doing. It was a big comeback after a big rainstorm. It was awesome.

Note: I failed to mention the awesome students who stayed in their seats through the rain storm, probably just for fear of losing their spot, and gave this one of the most electric atmospheres of any game in 2009. I failed to mention this because I never saw it live being stuck down in the death trap.

Both teams also went through warm-ups and then realized they would have to go chill in the locker room until the storm passed. Once the officials gave the go-ahead, Chizik gave this pregame speech. It’s not to the Dye-level, but it was getting there.

However, the speech didn’t work too well as the Moutaineers took a 14-point lead less than five minutes into the game. The two scores came on Noel Devine runs of 1 yard and 71 yards (not the 85 yards I remember).

The Tigers got on the scoreboard later in the quarter with a Wes Byrum field goal followed by a 16-yard touchdown pass from Chris Todd to Darvin Adams, but before Auburn fans got too comfortable, West Virginia scored another touchdown. The score at the end of the 1st quarter was 21-10. That’s a lot of points.

Auburn would do the only scoring in the 2nd quarter and it was in the exact same manner as the 1st: a Wes Byrum field goal followed by a touchdown pass from Todd to Adams. The Tigers had caught up by halftime, but the Mountaineers still lead 21-20.

West Virginia showed that they weren’t going away as Devine scored his third touchdown of the night, halfway through the 3rd quarter. The ‘eers missed the extra point giving Auburn a chance to tie with a touchdown and successful PAT.

Auburn did just that with a 1-yard screen pass followed by an 81-yard run by Mario Fannin. Wes Byrum kicked the extra point to tie the game at 27-27.

West Virginia took the lead one last time with a field goal late in the quarter. It would be their last points of the game. Going into the 4th they led 30-27.

Darvin Adams caught his third touchdown of the night halfway through the 4th quarter to give Auburn the lead 34-30. The Tigers would seal the win when Craig Stevens returned an interception for a touchdown.

Why did I pick this game? If you asked anybody that went to this game what their favorite game from 2009 was, they would probably say this one. The rain combined with the comeback made for one of the best games of the season, and one of the best in Jordan-Hare history. Avenging the previous year’s loss to the Mountaineers along with the whole SEC/Big East thing just added on to everything that made this one great.

Play of the Game: Mario Fannin’s 82-yard run after catch for a touchdown in the 3rd quarter tied the game, finalizing Auburn’s comeback from an early 14 point deficit.

Quote of the Game: “First of all, I would like to say that I wish I had 87,000 game balls because our fans were a huge reason we won that game and I went them to know that. We had thousands of students to stay here through that whole thing. Everybody came early and nobody left because of the weather, and I promise you that was one of the huge reasons we won the game and momentum swings happen because of our fans.” – Gene Chizik