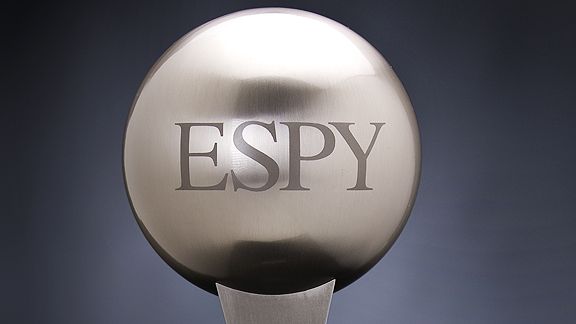 The 2011 ESPY Awards will be broadcast on Wednesday, July 13 at 8pm CT. This year, as it should be, there are multiple awards (but not enough) that have an Auburn player, coach, or game in the running. Us Auburn fans haven’t done too well in the fan voting category this year (exhibit A, exhibit B), so it’s time to step up and vote, especially with some real hardware on the line.

I know we’re not going to let the jealous world (who, regardless of team affiliation, will vote against all things Auburn because it’s been proven that Cam Newton kicks puppies and that Gene Chizik spits on babies) deny the most deserving player, coach, and team to win an award or five. Are we? <cold, dead stare> Are…we?

Let’s take a look at each award that includes an Auburn entity.

I mean, all bias aside, Cam Newton should win this hands down. We knew Blake Griffin was good. He was awesome in college. He “broke through” a long time ago. Cam Newton came from Blinn Junior College and the next year won a BCS National Championship. Bautista, as best I remember, hit a lot of homeruns on a terrible team that went nowhere. Arian Foster… I honestly never thought about him once last year. Li Na, I’m sure you’re great, but no.

I mean really, should there even be a vote? Best rivalry, biggest comeback in school history, National Championship on the line. It’s no contest.

This is a biggie, therefore the hate will be out in full force. It will probably come down to the Packers and Mavericks. They have more of a national fan base, therefore will receive more votes. Probably the Pack.

No coach did more with (supposed) less than Gene Chizik. Part of a college football coach’s job is to assemble a team of coaches and a team of players, and he has done a better job of that than anybody in the country. Not to mention being able to win on the field when the ENTIRE world was doing their best to split the team up.

Jim Calhoun is a proven cheater, so I’m not sure why he’s on this list. Rick Carlisle just has to say “give the ball to Dirk.” McCarthy doesn’t have to do the off-the-field work that Chizik does. Over the years, I’ve gathered that Virginia has a good Lacrosse team, but when Starsia handles what coaches in the spotlight have to handle and still wins, then I’ll put him up there with the rest.

You gotta love a white guy from Utah who can dominate a basketball game, but sorry Jimmer. Hockey guy, nah. As I said, Cam Newton was the best player on the best team in the best sport. And if we want to believe what the world says, he made a mediocre team turn into champions. Lacrosse is about 5th on the list of manly sports, so it’s a no-go this time, Rob. Kemba is good, and he may win because of the hate factor, but Cam is better at what he does.

Ok, so now lets talk about one nomination snub…

Maybe this list is only for pro athletes, but to say that Cam Newton wasn’t one of the best male athletes of this year is a sham. He won the Heisman halfway through the season. It was a no-brainer. Add the off-the-field stuff, and how he handled it and was still able to win, and you’ve got one of the greatest sports performances of all time. I can agree with two guys on the list, and his level of play this year easily matches theirs.

I know some of you love NASCAR, but we all have to agree that no matter how fast they’re going, or how long the races last, driving a car is not at an athletic event. Sure, they sweat, but I sweat cutting the grass. Is grass-cutting an athletic event? I know Jimmie has dominated the “sport’ the last few years, but that in no way makes him an athlete, nor should he be considered with guys who have won real sport championships. I’m not bashing NASCAR, I’m bashing the idea that it’s a sport.

Nadal may play tennis, and tennis may be considered a little soft by some, but I do think of him as an athlete. If you’re good at a sport and even guys like to see you with your shirt off, you’re an athlete and a dang good one. Dirk was sort of like Cam this year. Nobody really thought they would win, but he shut everybody up and took over. Aaron Rodgers, I mean, yeah, he had a good season, and he’ll probably continue to be good, but I think he’s just on this list for being the quarterback of the Super Bowl Champions.

Alright, so now that you know what Auburn is nominated for GO VOTE NOW! Voting ends July 9th at 10:59 pm CT.

Roundtable of Tigers Past – LSU Week

why isn’t alabama up for best upset in the iron bowl?

I’m a Bama grad, but also like Auburn. Cam and AU have my vote, even the IB game (tho’ of course had hoped for a diffent outcome – mighty exciting though).

I won’t be surprised if Auburn doesn’t win any of these, ESPN never shows Auburn love. Is it just me or every other year the National Champ has a highlight video during commercials for ESPN, but I haven’t seen a single one about Auburn. But I guess it should all makes sense, Reese Davis is a Bama grad!