UPDATE: I have been emailing back and forth with someone related to the person who took the infamous picture, and have updated what I had originally posted below.

As you may remember, during the week leading up to the Clemson game, the Auburn Family was all abuzz regarding the rumor of the team wearing blue pants. As you may also remember, the blue pants rumor took a back seat to a much bigger (and founded by photographic evidence) rumor of blue helmets being worn.

The picture below was texted, emailed, blogged about nationally, and talked about all week. People argued over whether they should wear them. People argued whether the picture and/or helmet were fake. I don’t know how many times I heard “Look how big the guy’s hand is. It’s gotta be a mini helmet.” 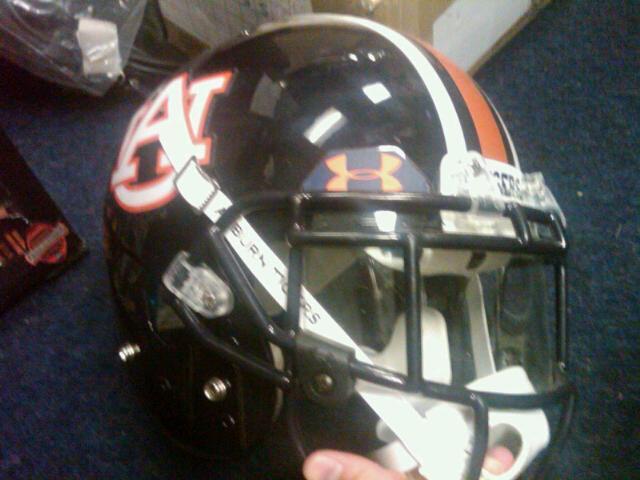 I never truly made my decision on whether I wanted the blue helmet or not until I felt that small sense of letdown when the team did not run out on the field with them on. I didn’t want it to happen, but yes, it would have been cool.

Anyway, none of that matters. It was never going to happen. It wasn’t a helmet sent by Under Armour. It was never even an option, and as long as the current equipment guy is at Auburn, it probably won’t.

A source who held the full sized helmet in his hands and also has deep connections inside the Athletic Department (how Schadian of me), has told me that the blue Auburn helmet was just a fun experiment performed by the equipment manager (double confirmed).

The blue helmet was sent to Auburn by Riddell with no stickers or striping on it. The equipment manager wanted to see what a blue Auburn helmet would look like so he stuck on the stripes and the AU logo. The picture was taken by an assistant baseball coach (double confirmed) who snuck in the equipment room to get a peek. The helmet was made before the season started (double confirmed), not just with True Blue on the horizon, and the picture may have even been two years old (not true, the picture was taken Clemson week).

Also double confirmed that this was the ONLY blue Auburn helmet in existence (inside the Athletic Complex) and it lived under the equipment manager’s desk until it was decommissioned.

So there you have it. This was not a prototype from Under Armour as previously I suggested it may have been. It was never going to be worn, and I’ve been told it doesn’t even exist anymore. It was de-striped and de-stickered and has been sent out to pasture? Get it? Pasture…cow college…

I have emailed the equipment manager asking for further clarification and any more details he may be willing to offer, but I truly trust my source(s) on this.

I was given one more tidbit of information by my (first) source not regarding headgear, but I won’t give that away right now. I’ll just ask this: when’s the last time you saw Chizik wearing an orange jacket/pullover?

Interesting Tidbits on Football, Harvey Updyke, and the Happiest Village on the Plains

too bad, besides looking really AUsome on top of the visiting white uniforms … with multiple uniform / helmet combinations, Auburn could do for Under Armor what … Nike did for Oregon …

got a friend who’s a manager with the football team. Apparently that’s a Cal helmet with Auburn stickers on it.

I endorse this message

Does the last line mean we are going to see a deemphasis of orange?

I wonder if this really is the case, why would the athletic department have white AU’s laying around and the white stripes? Those would need to be for specific purposes. They didn’t just go to the equipment room and lift a decal set for this. Which leads me to think it has some demo qualities to it or simply a fan thing.

“I wonder if this really is the case, why would the athletic department have white AU’s laying around and the white stripes?”

The blogler has spoken. Do you doubt his knowledge? Shame.

I wondered the same thing at first, but then I realized that there are probably many prototype and promotional stickers, jerseys, shirts, hats, or gear that never see the light of day. They live in the deep dark recesses of the equipment dungeon that won’t return emails.

THAT is a great question! No way those decals were “just laying around”. I thought the same thing. I think this entire blog and the follow-up confirmation of the confirmation of this blog are all a smoke screen. Chizik and company bought themselves all the leeway they needed to make a uni change by winning a National title. I say the blue helmets debut sometime this year. Think this is all a ruse to make people forget about it. I doubt the blogger….shame on me. :)

Like I said, we have no idea what they have down there. I am sure there are tons of experimental things down there that we never see. I agree that they could make a change this year and people would care a little less now that we have won a NC, but from what FOUR people have told me now, everything I posted is dead on.

I LOVE our uniforms the way they are……many of my non-Auburn friends, shockingly GUYS say we have the BEST LOOKING uniforms around. =)

Have you heard anything about blue pants? The new EA Sports NCAA Football game has screenshots/video showing Auburn wearing blue pants on the road, with “War Eagle” on the back, which is repeated on the white pants.

So do you think we are going to leave some orange stuff at home this fall?

Its blue pants, i saw it on NCAA 12, although they dont look great with a white helmet in my opinion.

My only question about this is where did he get the White “AU” with the orange border? We don’t use that color scheme on our helmets.

[…] Orange" is used in the spirit points system, it can't be dropped just like that (I snapped). I have alluded to this before, but think about it: when is the last time you saw Chizik wear an orange shirt? I know he did the […]

I just wanted to say that after looking at the orange helmets, I like the blue.

I had a thought that we didn’t need any additional motivation to win last year. Possibly with a young team we could use a little boost that different uniforms could provide. Like GA’s black out unis.

I really like your article. They all are good. Tagsports is the best way to popular your sign. it provides so many marvellous stickers and decals. For more information,you can visit the http://www.tagsports.net/Football_Helmet_Decals_Stickers_s/75.htm