This email was sent to me by a ‘Blogle reader. I’m not sure who got it. Maybe you did. If not, it pretty much answers every question you have about the poisoning process/effects/future of the trees. Here you go: 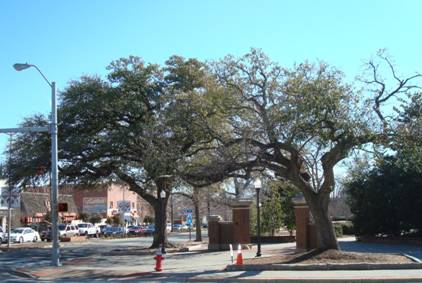 The Poisoning of Toomer’s Oaks

What we currently know:

While details are still coming in, it is now clear that Toomer’s oaks were maliciously poisoned at some time following the 2010 Iron Bowl.

How do we know this is true?

Soil testing conducted by the Alabama Department of Agriculture and Industries has confirmed very high concentrations of the herbicide tebuthiuron in the beds at the base of each tree. This herbicide is not used for weed control on campus in any manner.

The herbicide active ingredient tebuthiuron was used. The product was probably Spike® 80DF. This herbicide active ingredient has been used for decades in non-crop areas across the country and in rangelands for sagebrush control in the Western United States. It is used in Alabama for controlling woody vegetation (trees and shrubs) primarily in rights of ways and in industrial areas.

How does the herbicide active ingredient tebuthiuron work?

Tebuthiuron is taken up through the soil by plant roots and is transported through the water conducting vessels known as xylem to the leaves. It then inhibits photosynthesis within the chlorophyll. The result is twofold: 1) a shutdown in the fixation of carbon dioxide and 2) a serious energy imbalance that causes the actual degradation of the chlorophyll and the cell membranes.

What are the symptoms?

Leaves turn yellow as chlorophyll begins to break down and then turn brown and die. There also may be some interveinal chlorosis (veins stay green but surrounding leaf tissue yellows) and initial browning at the leaf margins.  At very high tebuthiuron concentrations, leaves may skip the yellowing and rapidly turn brown.

Is the tree dead after the leaves fall off?

Not necessarily. Many woody species are hardy and can leaf out following tebuthiuron treatment. However, tebuthiuron will continue to be taken up from the soil by the roots and the tree will experience the same foliar symptoms again. Typically trees may go through a few cycles of this before dying.

Speaking of soil, how long does tebuthiuron persist?

I was at Toomer’s corner celebrating after the SEC and BCS championships. Have I been poisoned by just being there?

NO. Absolutely not. You would need to ingest large quantities of the concentrated product or put a large amount directly in your eyes and leave it there to experience any problems. Additionally, tebuthiuron is NON-carcinogenic (It does NOT cause cancer). Spike® 80DF manufacturer Dow AgroSciences provides a link to the product label at: http://www.cdms.net/ldat/ld4HG008.pdf.

Can Toomer’s oaks be saved?

At this point, we do not know but it truly does not look good. Soil test results show the lowest amount detected in the soil under the trees was 0.78 parts per million, which has been described as a “very lethal dose.”  The highest amount detected was 51 parts per million, or 65 times the lowest dose. Activated charcoal will be applied to the soil around the trees to inactivate as much of the herbicide as possible. However, the herbicide dose was incredibly high and we don’t know how much herbicide the trees absorbed through the roots before we discovered the problem. We also don’t yet know if the herbicide stayed around the trees or was moved with the repeated flooding caused by the washing of the trees to remove the toilet paper after each subsequent football game.

What steps are being taken to protect the rest of Samford Park?

If I have information on who poisoned Toomer’s oaks, who should I call?

This information was prepared by Drs. Stephen Enloe and Scott McElroy, Department of Agronomy and Soils, Auburn University.

LSU Preview: Let’s Get Back to Normal

Chlorophyll is great because it can help detoxify our body from the toxins that accummulated inside our body. :

Remember to pay a visit to our own homepage
http://www.melatoninfaq.com/melatonin-sleep-aid/

Excellent beat ! I would like to apprentice whilst you amend your
website, how can i subscribe for a blog site?
The account helped me a acceptable deal. I had been tiny bit acquainted of
this your broadcast provided bright transparent concept