Jack weighs in on the Cam Newton situation and gives us a little info from his insider. I’m not saying that what he says is the end-all, be-all truth, but he told me all of this Friday, a good 100 hours before the report about the NCAA speaking with Jody Wright came out today. Considering his source told him about Wright, it’s hard to deny the rest. What do you think? 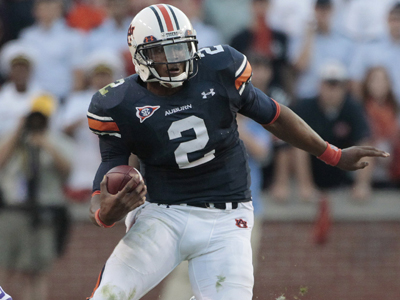 Shoot the Messenger
by JackTheRabbit

Auburn gets a much needed break this weekend, but since the ‘Blogler doesn’t take a break, I will (from discussing on field performance).

Instead of previewing a team that we aren’t playing this week I’d like to share some more thoughts on the sCAMdal. Basically what I’d like to do is compile truth and rumors of the situation that I’ve collected over the weeks and fill you in on my understanding of what’s going on. I have collected some pretty solid information from a source of a source of a source. I think the ‘Blogler should tweet it. Maybe he’ll inadvertently destroy the entire economy this time (sorry Washington but you’re just too slow).

First, allow me to share my prediction for what I think the next few weeks will bring, then I’ll get to the good stuff, I promise.

The post-season will reveal a lot about Auburn’s stance on Cam’s innocence. I’ll set up a few hypotheticals for you. If Auburn wins out and makes it to the BCS National Championship Game then Auburn’s chances of benching Newton if they believe he’ll later be ruled ineligible will increase dramatically. Think about it. If Auburn really thinks they would have to vacate wins in the future then they have to ask themselves which wins really matter. Hypothetically, Auburn could get every game wiped away except the BCS Championship game if Cam doesn’t play in that game.

I believe you’d see a similar instance if Auburn loses to Alabama, except Cam would sit in the SEC Championship game. Of course, if they don’t believe they’ll face forfeiture of wins then Cam will play in every game, which is what I expect and I’ll tell you why.

DISCLAIMER: THIS INFORMATION WAS OBTAINED BY A SOURCE FROM A SOURCE THAT CLAIMS TO BE WORKING WITH THE SCHOOL ON THIS CASE. THEREFORE, IT IS HEARSAY AND I DO NOT CLAIM THAT IT IS ABSOLUTE TRUTH, SO IT SHOULD NOT BE CONSIDERED FACT. DRAW YOUR OWN INFERENCES FROM WHAT IS SAID AND GET OFF MY BACK.

What I was told basically said that Cecil Newton did seek out payment for Cam’s commitment to Mississippi State without his son’s knowledge. However, Cecil had a change of heart. There’s some disagreement over why. Maybe it was because he didn’t want to go against the NCAA, or maybe it was because he was afraid that someone would put together the issues with his church, etc. Either way, Cecil apparently decided against taking money for Cam’s signature.

After making this decision, Cecil went to Gene Chizik and explained his situation. Gene and Cecil decided to go to the SEC and NCAA BEFORE Mississippi State and made sure that if Cam signed elsewhere then he’d be cleared to play. Both gave their consent and said that Cam would be eligible as long as he didn’t sign with Mississippi State. Now you know why Cecil made the decision for Cam about where he would play football.

This whole situation would have died had it not been for Cam’s success on the field. Now that Auburn was in contention for a national title and Cam was Heisman front-runner, someone decided to leak this information. It has been about timing since this entire deal was leaked.

Jody Wright was an assistant at Mississippi State during Mullen’s first season, and surprisingly left to work as a grad assistant for Nick Saban before this season began. There is much speculation behind Mr. Wright as being the source that dug up this information and talked John Bond into taking it to the media. Who pushed Mr. Wright for the information isn’t exactly known (*cough* Saban *cough*).

Once again, this is all information from a source that has been passed onto me from another source. Take everything relayed with a grain of salt, and see previous disclaimer. This explanation, however, seems to be the most solid idea behind what’s going on. Feel free to shoot the messenger here (you won’t be hurting my feelings), but remember I’m just doing what everyone else (Thayer Evans, ESPN) has been doing since the beginning.

Snowy Jordan-Hare and the “White” Space

It’s Time for Auburn to Wear a Real Throwback

I’ll say this, Jack: This story answers two nagging questions I had.
1. Why the heck would Cecil ask for money from a school and then NOT push Cam to go there? I couldn’t get past that question. As evidence kept piling up, I still couldn’t settle that. That story goes a long way toward settling it.
2. What does Alabama have to do with this? Because, I mean, they HAVE to have something to do with this. Bo knows. Bo may know what your source’s source knows.

I’ve always thought the reason behind Cam’s “the money was too much” quote is something like the explanation you have given.
I don’t think the NCAA is going to punish anyone at Auburn for this, but Mississippi State has some ‘splainin to do.

Thanks Blogle! I hope this turns out to be true. Either way it helped me relax and have a good night sleep.

This explanation is similar to what I have thought since the story broke. My source’s source has maintained that Auburn is CLEAN throughout the scandal and that extortion may be the issue. Cam and Auburn should not be penalized if Cecil had a change of heart – bad precedent.

Last night I was listening to the radio and heard one of those, “Sportscenter” updates on ESPN radio. So the announcer says that the FBI & NCAA had met with John Bond who speaking through his lawyers said, “Cecil Newton asked me for money.”

So a couple questions arise from this statement.

#1: Why is a MSU booster meeting with a recruit’s father?
#2: Why is Bond now saying that he met w/ Cecil? Didn’t he blame Kenny Rogers for this very thing last week?

Based on the FBI investigation, Jack’s story and some other tidbits (rumors/hearsay) I’ve heard over the week, it sounds to me like MSU is going to be in a lot of hot water over this one.

Gotta wonder why the FBI is involved. The FBI doesn’t enforce organization’s (NCAA) rules, they enforce laws. So, what laws could have been broken in this? Taking money to play for a college football teams is against NCAA rules, but it’s hardly illegal. I’ll tell you what is illegal though…Slander…..libel…..defaming someones character….blackmail……HMMMMMM….this whole thing just might be the opposite of what it has seemed…..Newton and AU have handled themselves pretty steadfast and confident. Miss St people are the ones it seems are grasping onto something, and look to be being the ones on the defensive to me……..maybe cuz they are being probed by the FBI?

I unno, just a thought…

The more I have followed this story, the more I am convinced that you have it pretty much right. I’ll admit in the beginning I thought Cam was guilty, there was just too much smoke for there not to be a fire. But now it seems this was all put out to get the Newtons before they got them. It seems to me that MSU probably offered Cecil Newton money which he probably accepted in the beginning. For whatever reason he had a change of heart, hence the “Money is too much” statement. It doesn’t make sense for him to say this for any other reason. I believe that the people involved at MSU decided their best defence was to go on the offensive against the Newtons. They basically have no other choice unless they just want to incriminate themselves. Luckily for the Newtons it seems that they have gone about this in a very sloppy way. Their stories don’t match up, Rogers has changed his story, and Bell gave the “dog ate my homework” excuse for the missing text message. As far as the allegation that Cecil said that he was looking for more than a scholarship, this could mean anything and doesn’t neccesarily have to do with money. His son got into a lot of trouble at Florida and any reasonable person could assume that this statement could just mean that he wanted his son to be in an environment where his kid would stay out of trouble or have better academic help for all we know. Rogers has no credibility, Bell has no evidence, and Bond is just relaying heresay. The only people who could break this open are the two assistants that Rogers mentioned and to my knowledge they haven’t been named and aren’t talking.

@Brian039: hence the FBI involvement…….MSU is inder federal investigation is what all this amounts to.

This is similar to what I have been thinking also. I hope and pray it is the truth. Auburn seems too confident with this. It is driving the media crazy that they keep letting Cam play. I hope it is the truth and we will enjoy the ending with folks with egg on their faces.