I’m sure most of you have heard that Ole Miss will wear white jerseys in this weekend’s match-up with our Tigers. There are even talks of completely new uniforms (white helmets, etc.) This, of course, means that Auburn will be wearing their standard blue home jerseys, white pants, and white helmets (or will they?).

The strange thing about this white uniform thing is that Ole Miss asked their fans to wear blue. I know that when Auburn is at home fans usually wear orange and the team wears blue, but if you’re having an “insert color here” -out, you usually want to match your team’s color for that day. Not to mention the fact that with Auburn fans wearing orange and Ole Miss fans wearing blue, Vaught-Hemingway Stadium will have a very nice, pro-Auburn look to it. Top notch, Ole Miss.

This normally wouldn’t bother me because a jersey modification doesn’t change a 3-4 record, but I do love Auburn’s all white, Storm Trooper, away uniforms. They just look good. And Cam looks really good in it, too. Really good…really…good. Oh sorry, where was I?

Anyway, since Auburn will be taking on a team called the Rebels that happen to be wearing all white, and since Ole Miss loves Star Wars, they may come at the Tigers with this type of attack: 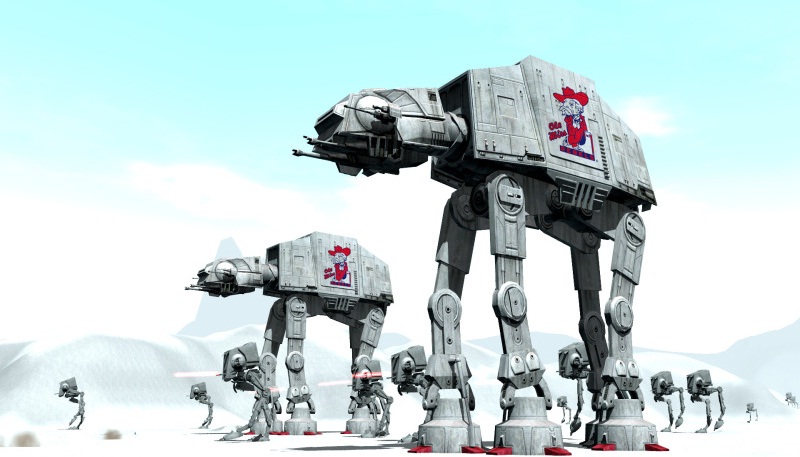 Here are some tweets of gold from last night regarding the whole thing:

@WarBlogle: Told a buddy about Ole Miss wearing all white. His response: “hoods and all?”

The Rebears aren’t stopping there in their attempt to make fans forget that they lost to Jacksonville State. They are also asking fans to partake in a new “yelling” scheme for this game. Whenever the Ole Miss defense is on the field, they want the fans to yell “Ooooooooooo”.

They are calling it “Yell-O” and even made cute buttons for it. They also made a video with detailed instructions. If you want to save brain cells and refrain from watching, they basically want their fans to make the most annoying sound possible. I personally would have gone with this.

If you’re smart like me, and if you’re reading this blog I know you are, I know what you’re thinking. When their D is on the field they want their fans to yell “O”? Makes sense, huh? Chalk another one up to an Oxford (MS) education.

So if you’re going to the game, remember to wear orange so that “The Vaught” looks a lovely shade of Auburn, and when the fans yell “O”, point to the field where Cam just ran over General Ackbar, a black bear, and Houston Nutt on the way to the endzone.

Thanks to @brad0022 for the Photoshop of the Week, and @davecowart for bringing the Yell-O while on D thing to my attention.