If you were at the game last weekend, you surely heard the shreiks of fear and jubilation coming from the press-box side of the stadium as Nova, one of Auburn’s eagles, came very close to snatching up a human during her pregame flight. I’ve always thought Nova was the rogue of the bunch. Her flights are shorter than Spirit’s, Auburn’s bald eagle, and she always seems to just do what she wants. This was the case like never before during last week’s pregame festivities. However, the near-mishap has brought us one of the funniest pictures I have ever seen, which brings me to the point of this post.

Last night, as Beautiful ‘Blogle and I were looking at this picture, we started coming up with what each person in the picture was saying during the attack. A few minutes in, we were laughing so hard that our heads hurt, so I decided to come up with a little contest based off of that.

You will below see that I have given a few of the fans/victims a number. What I want you to do is post a caption in the comments section for one or two or all of the numbers. It could look something like this: 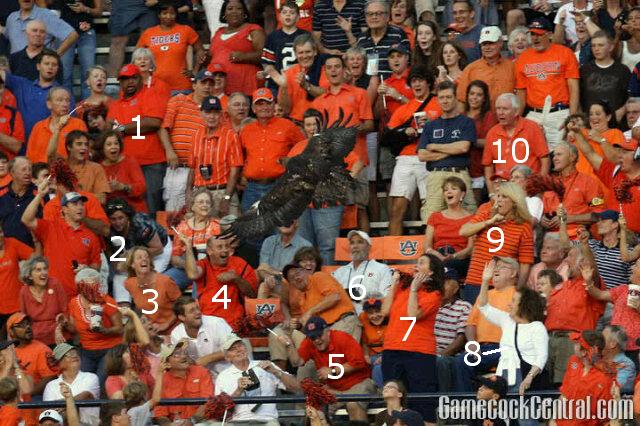 I’ll pick the top five later this week, and then let the readers vote for the best one. The winner will receive the “First Time Ever” DVD.

Don’t hold back. Your mama doesn’t read this blog. Oh, and don’t send your captions in an email or anything. I am only choosing from the comments section. If you have are having trouble registering to post yours, send me an email and I’ll get you signed up.

Have fun and be creative.

The ‘Kick Six’ with Wresting Commentary

From the Other Sideline – Georgia Southern

/talons out
Nova: Wait a minute….This isn’t the South Carolina section….
/talons in

1. Oh No, you betta tell that bird to settle himself.
2. Honey, look, I think Nova has a tatoo.
3. EEEEk! Run for your life!!!
4. Hey, Nova, why not take out the annoying Gamecock over there.
5. Dadgumit! That birds done gone and crapped on my new ball cap.
6. Hmmm, that whiskey I had earlier sure does make the eagle look much closer than normal.
7. Oh, heavens, you’re right honey. I didn’t know they could crap in flight.
8. Why are y’all freaking out? I’ve seen one closer than this.
9. He better be glad he didn’t come close to me.
10. Dang, boys, that there’s a real eagle. Never knew.

01 – Auburn has some big ass pigeons
02 – That dang bird knew that I was not saying War Eagle
03 – Yikes.. I should have had that pre-game drink
04 – POM POM shields activate
05 – Last time I will wear Magic Rabbit Cologne
06 – I wonder if that is a Aquila Chrysaetos or a Haliaeetus Leucocephalus?
07 – Is there an Eagle Whisperer in the stadium???
08 – Mildred… this place has bats
09 – Hmmm, I wonder I could take Nova to Tuscaloosa this year
10 – Damn bird has been watching too many Cam Newton highlights

1. Aw HEEEEEEEEELL NAW
2. Don’t let him get my $8 cold nachos!!!
3. If we scream back at him he won’t get us!!! C’mon Everybody!! RAAAAAAAAAAH!!!
4. Eeeeeeek! gitawaygitawaygitawaygitawaygitaaway /high pitched squeal
5. Ahhh. My back! Damn bird!
6. This ain’t nothin. Back in ‘Nam, Charlie was way bigger and scarier. /drinks out of flask
7. I can see its balls!
8. NOVA!! NOOOOVA! MY CHILD NEEDS YOUR AUTOGRAPH!!! MY CHIIIILD!!! NOVAAAA!!!
9. This better not ruin my shirt.
10. Can anyone tell me if I just pooped myself?

1. Awwwww hell naw
2. (ripping nasty fart on grandma to the right)
3. Inaudible Drunken Gibberish
4. OH Hay Bird Hayyyyyyyy! (gay voice)
5. I didn’t storm Normandy for this!
6. Is that a bird? How stoned am I? Is this real life? Who is this woman next to me? WHOOOOAAAAA Double Rainbow
7. Now I will do an impression of myself eating a hotdog
8. My mother had an affair with Susan B Anthony.
9. YOULLLLLL Crank Dat Soulja Boy
10. FUCK THIS NOISE… I’m going to get a pretzel

1. Dayum!
2. Ssssh, maybe it want see me.
3. SCREAM! (A form of combustion instability, especially in a liquid-propellant rocket engine, of relatively high frequency, characterized by a high-pitched noise.
4. Mmmt, oh my Larry, the bird is trying for my pom pom.
5. Quick! Stop, drop and roll.
6. Damn you Charlie, this war was over years ago.
7. Is that bird suppose to be doing that?
8. Oh WOW! Can I be next?
9. I think it touched me.
10. Honey, I don’t feel so good.