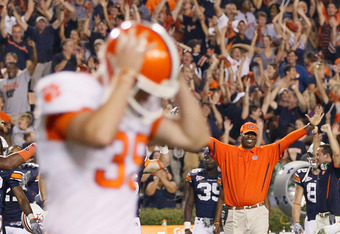 After reading the Clemson review that I posted on al.com‘s Tigers Corner last night, I first realized how bad it was, then I realized that I went through the whole thing and never mentioned uniforms, Auburn’s decision to play for overtime at the end of regulation, and why I knew Clemson’s kicker would miss the field goal.

The truth is that I was still worn out from the weekend and it was a struggle just to put down the words that you have, or probably have not read.

As much as I said I wanted Auburn to stay in their traditional uniforms for the Clemson game, I still had a small part of me that was heartbroken when those “Fearless and True” doors opened up and the white-helmeted, white-panted Tigers walked out. I wasn’t the only one. You could even hear a smattering of “boos” and “awws” coming from the student section. I don’t know if I wanted it to happen just for some ‘Blogle pub, or just because I had talked myself into the fact that it was going to happen and I just wanted to say I was right. Either way, I was down. I’ll admit it, it bothered me.

However, about ten minutes later, I couldn’t have cared less about blue helmets or pants. Clemson was throwing and running all over our Tigers, and like we all knew in the back of our minds, regardless of our uniform desires, that’s all that really mattered. When all was said and done, I’m glad the Tigers didn’t change it up, because the poor performance would have been blamed on the new uniforms. You know it and I know it. So as I’ve always said, if we’re going to change something, we better be dang sure we’re going to win.

Now let’s move on to things that matter more than the color of clothing. I’ve noticed a trend in the last two games that is very, very disheartening. Near the end of the 1st half at Mississippi State, Auburn started a drive near their own 20-yard line. Malzahn/Chizik dialed up a few plays that came across as an attempt to see if they could get 10-15 yards without having to do anything special. A few of the plays worked better than expected and the Tigers crossed midfield. Then something strange happened: the Tigers stood around and waited for the clock to run out. There could have been field goal attempt, there could been a throw to the endzone, but there was nothing. The Tigers were playing it safe and playing not to lose. This almost came back to bite them as the Bulldogs had a chance to win the game with a touchdown in the final seconds. An extra three points would have been just enough to keep any Mississippi State threat at bay.

This past week, near the end of regulation, Auburn forced Clemson to punt. With just under two minutes to go, Auburn started around their own 20-yard line again. Then they tried the same approach as the week before. They ran a few safe plays to see if they could possibly get down the field for a game-winning field goal. This time, though, those plays didn’t work, and the Tigers essentially let the clock run out. They were playing safe, they were playing for overtime, they were playing not to lose.

What made this even more irritating to me was the fact that the Tigers were faced with a similar situation before halftime. With even less time on the clock, Auburn drove down the field and kicked a field goal as the half expired. Why couldn’t we do that again? I understand we were one fumble or another interception away from giving Clemson another shot at the win, but playing it safe will eventually get us beat. I hate that style of play, and I didn’t expect it from a Malzahn-led offense and a Chizik-led team. There are far too many weapons on this offense to hold them back like this.

When the game went into OT, I was very doubtful of an Auburn win. The Auburn defense had done a much better job of holding down Clemson’s offense in the 2nd half, but with the drive starting at the 25-yard line, I knew they were one successful screen away from a win.

When Auburn had to settle for a field goal in their possession, I had almost given up. I knew Clemson would be able to muster a measly 25 yards, but then a few good things happened and they had to try their own field goal. He made it, but just like the 2004 LSU game that just so happened to occur on the same date, six years prior, there was a weird, almost never seen penalty called that gave Auburn another chance. (In 2004, Auburn missed the go-ahead extra point, but one of the LSU defenders landed on top of the deep snapper, which gave Auburn another chance to win the game. Of course, we know they did.)

As soon as he kicked it, as if I could see the future, I jumped up a second before anyone else noticed that it wasn’t going through. Then what transpired next is why I still have a small headache three days later.

All the turmoil of pant color, terrible first halves, and playing to lose went away. I let loose and screamed my head off, and this small pain in my head is worth it.

Cam Moves on to Round 2 of the Madden Cover Bracket

Auburn Beat Alabama in Basketball, As I Saw It

Anyone who was hoping for blue helmets/ pants doesn’t understand what “this place was great long before you got here” means.