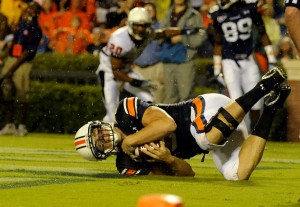 Offense continues to click. For the second straight week, Auburn’s opponent dared Chris Todd to beat them. Both Ball State and West Virginia put eight and nine in the box determined to stop the run. The problem with that line of coaching is that Chris Todd is proving that he can win a game with his arm and a collection of speedy, ankle-breaking, game-changing receivers.

Terrell Zachary shook one Ball State defender out of his shoes on his way to a 46-yard touchdown. Later in that same quarter, he ran a stop-and-go on a pump fake from Todd and caught a 65-yard touchdown pass in stride. Last week, Darvin Adams was the man as he caught three touchdown passes against West Virginia. Both this week and last week, Mario Fannin pitched in with his customary screen pass touchdowns. Even the aforementioned Trott caught the first touchdown pass of this week’s game. Oh, and when the passing game started to open up, guess what else started opening up? That’s right, Onterrio McCalleb joined in with the scoring on a 1-yard run following a 62-yard scamper off an option pitch from Todd. Put simply, Auburn is spreading the ball around, and it’s working.

Chris Todd has thrown for nine touchdown passes in two weeks and had a career high in passing yards last week. To say he’s in the zone would be an understatement. When the running game gets stuffed, he loosens up the defense with pump-and-go’s and record breaking bombs. This isn’t a one trick offense, but keep trying it.

Defense put in tough situations. Reserves struggle like reserves do. The thirty points scored by Ball State this week were a little disappointing, but also misleading. Ten of those points came from drives on very, very short fields given to the defense by a fumbled punt and a failed fake punt. Ball State scored ten points on two legitimate drives against the 1st-team defense. The last ten points were scored on the 2nd and 3rd-team defense, and even three of those came after a late interception thrown by Neil Caudle.

I’m surprised the media hasn’t said much about Auburn giving up thirty points to a team that hasn’t won a game or scored more than seventeen points in a single game this year. Maybe it’s the 54 that Auburn scored or maybe they still haven’t realized Auburn is fielding a team this year.

I’ve heard many fans complaining about the defense, and at this point I will admit it is the weaker of the two sides of the ball, but when the offense looks as good as it has, it’s going to be a little bit harder than usual for the defense to be the better side of the team. They may be giving up a few more yards and points than fans are used to, but that’s what’s so good about having such a productive offense.

Plus, when they are causing so many turnovers, yards don’t seem to matter as much. Currently Auburn is third in the nation with eight interceptions.

Special Teams are half and half. Wes Byrum has been a perfect 6-for-6 in FGs this season. Besides one blocked punt, Clinton Durst has been his normal “booming” self. Things start to get bad anytime anyone in an Auburn jersey tries to catch a kicked ball, especially punts.

Some number of players greater than “too many” have been given a shot at catching punts this year. Notice I didn’t say return punts. Auburn is worried about catching punts. Most players have only been giving one shot: one fumble and they’re pulled. I want the best guy out there just as much as anybody, but I fear that the Auburn coaching staff has created a similar problem to the quarterback fiasco from last year. It seems like every guy who gets back there to field the punt is thinking “catch the ball, catch the ball, catch the ball and the job is mine”. That’s a problem. It’s all mental right now, and something has to be done about it. I don’t care if it’s a lineman, just get someone back there who can catch the ball.

The line this week has been “now the real season starts.” In a way, I agree. The media and all those people who still don’t respect Auburn won’t start to give the Tigers a second look until they win their first road game against an SEC foe. Auburn will get their chance this weekend. The problem I have with this statement is that it makes what Auburn has done for the past month look like it didn’t matter. Well yeah, it matters, and every one of you knows it.